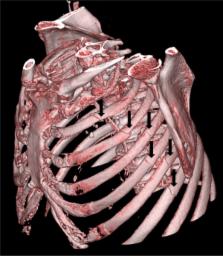 Chest trauma may be blunt or penetrating and the chest is the third most common trauma region. It is a significant cause of mortality. Multidetector computed tomography (MDCT) has been an increasingly used method to evaluate chest trauma because of its high success in detecting tissue and organ injuries. Herein, we aimed to present MDCT findings in patients with blunt and penetrating chest trauma admitted to our department.

A total of 240 patients admitted to the emergency department of our hospital between April 2012 and July 2013 with a diagnosis of chest trauma who underwent MDCT evaluations were included. Most of the patients were male (83.3%) and victims of a blunt chest trauma. The images were analyzed with respect to the presence of fractures of bony structures, hemothorax, pneumothorax, mediastinal organ injury, and pulmonary and vascular injuries.

MDCT images may yield a high prevalence of fracture of bony structures, soft tissue lacerations, and vascular lesions, which should be well understood by radiologists dealing with trauma.

Rathachai Kaewlai,  Robert Novelline,  Ashwin V. Asrani … (2008)
Thoracic injuries are significant causes of morbidity and mortality in trauma patients. These injuries account for approximately 25% of trauma-related deaths in the United States, second only to head injuries. Radiologic imaging plays an important role in the diagnosis and management of blunt chest trauma. In addition to conventional radiography, multidetector computed tomography (CT) is increasingly being used, since it can quickly and accurately help diagnose a wide variety of injuries in trauma patients. Furthermore, multiplanar and volumetric reformatted CT images provide improved visualization of injuries, increased understanding of trauma-related diseases, and enhanced communication between the radiologist and the referring clinician. (c) RSNA, 2008.

Comprehensive analysis of 4205 patients with chest trauma: a 10-year experience.

Burak Onan,  Semih Halezeroglu,  Kursad Oz … (2009)
Thoracic trauma is one of the leading causes of morbidity and mortality in developing countries. In this retrospective study, we present our 10-year experience in the management and clinical outcome of 4205 cases with chest trauma associated with blunt and penetrating injuries in a level I trauma hospital in Turkey. In 66% of the cases, blunt injury mostly related to traffic accidents was the cause of chest trauma. Additional organ injuries were found in 35% (n=1471). Conservative treatment was administered for most patients. Tube thoracostomy was administered in 40% of all cases, whereas thoracotomy was performed in 6% (n=252), of which 209 were early interventions (P=0.001). The morbidity rate in all victims was 25.2%. The mortality rate was 9.3% for all patients and was 6.8% in blunt, 1.4% in penetrating, and 17.7% in associated organ injuries. Mortality and injury severity score (ISS) increased in patients having early surgery (P=0.001). Although most patients could be managed with conservative approaches, early thoracotomy was required in some cases. We believe that urgent hospital admission, early diagnosis, and multidisciplinary approach are very important to improve outcome.

Value of thoracic computed tomography in the first assessment of severely injured patients with blunt chest trauma: results of a prospective study.

C Waydhas,  L. Schweiberer,  A Trupka … (1997)
The aim of this prospective study was to evaluate whether early thoracic computed tomography (TCT) is superior to routine chest x-ray (CXR) in the diagnostic work-up of blunt thoracic trauma and whether the additional information influences subsequent therapeutic decisions on the early management of severely injured patients. In a prospective study of 103 consecutive patients with clinical or radiologic signs of chest trauma (94 multiple injured patients with chest trauma, nine patients with isolated chest trauma), an average Injury Severity Score of 30 and an average Abbreviated Injury Scale thorax score of 3, initial CXR and TCT were compared after initial assessment in our emergency department of a Level I trauma center. In 67 patients (65%) TCT detected major chest trauma complications that have been missed on CXR (lung contusion (n = 33), pneumothorax (n = 27), residual pneumothorax after chest tube placement (n = 7), hemothorax (n = 21), displaced chest tube (n = 5), diaphragmatic rupture (n = 2), myocardial rupture (n = 1)). In 11 patients only minor additional pathologic findings (dystelectasis, small pleural effusion) were visualized on TCT, and in 14 patients CXR and TCT showed the same pathologic results. Eleven patients underwent both CXR and TCT without pathologic fundings. The TCT scan was significantly more effective than routine CXR in detecting lung contusions (p 2 were compared with a historical control group, consisting of 84 patients with multiple trauma and with blunt chest trauma Abbreviated Injury Scale thorax score of > 2, prospectively studied between 1986 and 1992. Age (38 vs. 39 years), average Injury Severity Score (33 vs. 38), and the rate of respiratory failure (36 vs. 56%) were not statistically different between the two groups, but the rates of adult respiratory distress syndrome (8 vs. 20%; p < 0.05) and mortality (10 vs. 21%; p < 0.05) were significantly reduced in the TCT group. TCT is highly sensitive in detecting thoracic injuries after blunt chest trauma and is superior to routine CXR in visualzing lung contusions, pneumothorax, and hemothorax. Early TCT influences therapeutic management in a significant number of patients. We therefore recommend TCT in the initial diagnostic work-up of patients with multiple injuries and with suspected chest trauma because early and exact diagnosis of all thoracic injuries along with sufficient therapeutic consequences may reduce complications and improve outcome of severely injured patients with blunt chest trauma.