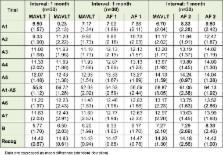 Richard F Haase,  Karen Duff,  Holly J. Westervelt … (2001)
Repeated neuropsychological assessments have been recently employed to investigate the natural course and effects of interventions in individuals with human immunodeficiency virus (HIV) infection. Important considerations when interpreting serial assessments are the roles of practice effects and test-retest reliability on follow-up performance. Although several statistical and methodological controls have been proposed for minimizing practice effects, they have not been empirically tested in HIV samples. Three groups (HIV+/symptomatic, HIV+/asymptomatic, HIV- "at risk" controls) were administered the California Verbal Learning Test (CVLT) twice with a brief test-retest interval. Significant practice effects were observed on six of the CVLT measures. Test-retest stability coefficients were reported. A third and fourth administration of the CVLT was conducted to observe the impact of the dual baseline assessment approach on test performance. Trend analyses indicated that the dual baseline approach is a viable method for minimizing practice effects. The dual baseline approach also lead to improvement in a number of the stability coefficients. Limitations and future directions are discussed.

This is an Open Access article distributed under the terms of the Creative Commons Attribution Licence ( http://creativecommons.org/licenses/by/4.0/) You are free to copy, distribute and transmit the work, provided the original author and source are credited.