Transoral incisional fundoplication for reflux after peroral endoscopic myotomy: a crucial addition to our arsenal 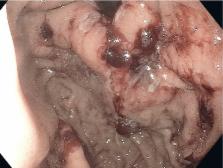 Increased esophageal acid exposure is seen in a large percentage of patients with achalasia who undergo peroral endoscopic myotomy (POEM). Endoscopic transoral fundoplication (TIF) is a novel endoscopic technique for the management of patients with chronic gastroesophageal reflux (GERD). We present the first case series evaluating the role of TIF post-POEM.

Consecutive patients 18 years or older from our academic institution who underwent a POEM procedure and subsequently underwent TIF for symptomatic reflux or regurgitation between December 2014 and June 2017 were included. The primary outcome was discontinuation of proton-pump inhibitor (PPI) use and healing of esophagitis (when initially present) on post-procedure esophagogastroduodenoscopy (EGD). Technical success was defined as successful completion of the endoscopic fundoplication. Adverse events (AEs) were recorded for all patients.

Five patients were included (60 % male, average age 55 ± 14 years). Technical success was achieved in 100 % of patients. Discontinuation of PPI use was achieved in 5/5 patients (100 %). Three patients had esophagitis pre-procedure and all were noted to have resolution of inflammation on post-procedure EGD. No adverse events were noted. Mean follow-up time was 27 months (range 5 – 34 months).

TIF post-POEM appears feasible, safe, and efficacious in improving symptoms and esophagitis, decreasing long-term risks of acid exposure, and decreasing risks of long-term PPI use in patients post-POEM in this small cohort of patients. Larger studies are needed to confirm these initial findings.

Incidence of adenocarcinoma among patients with Barrett's esophagus.

The Risks and Benefits of Long-term Use of Proton Pump Inhibitors: Expert Review and Best Practice Advice From the American Gastroenterological Association.

Efficacy of transoral fundoplication vs omeprazole for treatment of regurgitation in a randomized controlled trial.