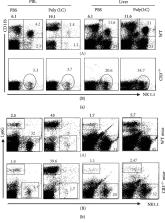 One of the activating factors of the cells of the innate immune system is the agonists of toll-like receptors (TLRs). Our earlier publications detailed how poly(I:C), a TLR3 agonist, elevates the NK cell population and the associated antigen-specific CD8 + T cell responses. This study involved a single treatment of the B6 mice with poly(I:C) intraperitoneally. To perform a detailed phenotypic analysis, mononuclear cells were prepared from each of the liver, peripheral blood, and spleen. These cells were then examined for their NK cell population by flow cytometric analysis following cell staining with indicated antibodies. The findings of the study showed that the NK cell population of the liver with an NK1.1 highCD11b highCD11c high B220 +Ly6G − phenotype was elevated following the treatment with poly(I:C). In the absence of CD11b molecule (CR3 −/− mice), poly(I:C) can still increase the remained numbers of NK cells with NK1.1 +CD11b − and NK1.1 +Ly6G − phenotypes in the liver while their numbers in the blood decrease. After the treatment with anti-AGM1 Ab, which induced depletion of NK1.1 +CD11b + cells and partial depletion of CD3 +NK1.1 + and NK1.1 +CD11b − cell populations, poly(I:C) normalized the partial decreases in the numbers of NK cells concomitant with increased numbers of NK1.1 −CD11b + cell population in both liver and blood. Regarding mice with a TLR3 −/− phenotype, their injection with poly(I:C) resulted in the partial elevation in the NK cell population as compared to wild-type B6 mice. To summarise, the TLR3 agonist poly(I:C) results in the elevation of a subset of liver NK cells expressing the two myeloid markers CD11c and CD11b. The effect of poly(I:C) on NK cells is partially dependent on TLR3 and independent of the presence of CD11b.

Maturation of mouse NK cells is a 4-stage developmental program.

Eric Vivier,  Justin C. Roth,  Julie Chaix … (2009)
Surface density of CD27 and CD11b subdivides mouse natural killer (NK) cells into 4 subsets: CD11b(low)CD27(low), CD11b(low)CD27(high), CD11b(high)CD27(high), and CD11b(high)CD27(low). To determine the developmental relationship between these 4 subsets, we used several complementary approaches. First, we took advantage of NDE transgenic mice that express enhanced green fluorescent protein (EGFP) and diphtheria toxin receptor specifically in NK cells. Diphtheria toxin injection leads to a transient depletion of NK cells, allowing the monitoring of the phenotype of developing EGFP+ NK cells after diphtheria toxin injection. Second, we evaluated the overall proximity between NK-cell subsets based on their global gene profile. Third, we compared the proliferative capacity of NK-cell subsets at steady state or during replenishment of the NK-cell pool. Fourth, we performed adoptive transfers of EGFP+ NK cell subsets from NDE mice into unirradiated mice and followed the fate of transferred cells. The results of these various experiments collectively support a 4-stage model of NK-cell maturation CD11b(low)CD27(low) --> CD11b(low)CD27(high) --> CD11b(high)CD27(high) --> CD11b(high)CD27(low). This developmental program appears to be associated with a progressive acquisition of NK-cell effector functions.

Guido Ferlazzo,  Christoph Müller,  Lorenzo Moretta … (2004)
Dendritic cells (DCs) are known to induce the growth and function of natural killer (NK) cells. Here, we address the capacity of DCs to interact with NK cells in human lymphoid organs and identify the role of specific DC-derived cytokines. We demonstrate that DCs colocalize with NK cells in the T cell areas of lymph nodes. In culture, DCs from either blood or spleen primarily stimulate the CD56(bright)CD16- NK cell subset, which is enriched in secondary lymphoid tissues. Blocking of IL-12 abolished DC-induced IFN-gamma secretion by NK cells, whereas membrane-bound IL-15 on DCs was essential for NK cell proliferation and survival. Maturation by CD40 ligation promoted the highest IL-15 surface presentation on DCs and led to the strongest NK cell proliferation induced by DCs. These results identify secondary lymphoid organs as a potential DC/NK cell interaction site and identify the distinct roles for DC-derived IL-12 and IL-15 in NK cell activation.