Physiological correlates of ecological divergence along an urbanization gradient: differential tolerance to ammonia among molecular forms of the malaria mosquito Anopheles gambiae 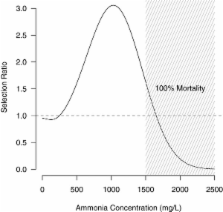 Limitations in the ability of organisms to tolerate environmental stressors affect their fundamental ecological niche and constrain their distribution to specific habitats. Evolution of tolerance, therefore, can engender ecological niche dynamics. Forest populations of the afro-tropical malaria mosquito Anopheles gambiae have been shown to adapt to historically unsuitable larval habitats polluted with decaying organic matter that are found in densely populated urban agglomerates of Cameroon. This process has resulted in niche expansion from rural to urban environments that is associated with cryptic speciation and ecological divergence of two evolutionarily significant units within this taxon, the molecular forms M and S, among which reproductive isolation is significant but still incomplete. Habitat segregation between the two forms results in a mosaic distribution of clinally parapatric patches, with the M form predominating in the centre of urban agglomerates and the S form in the surrounding rural localities. We hypothesized that development of tolerance to nitrogenous pollutants derived from the decomposition of organic matter, among which ammonia is the most toxic to aquatic organisms, may affect this pattern of distribution and process of niche expansion by the M form.

Acute toxicity bioassays indicated that populations of the two molecular forms occurring at the extremes of an urbanization gradient in Yaounde, the capital of Cameroon, differed in their response to ammonia. The regression lines best describing the dose-mortality profile differed in the scale of the explanatory variable (ammonia concentration log-transformed for the S form and linear for the M form), and in slope (steeper for the S form and shallower for the M form). These features reflected differences in the frequency distribution of individual tolerance thresholds in the two populations as assessed by probit analysis, with the M form exhibiting a greater mean and variance compared to the S form.

In agreement with expectations based on the pattern of habitat partitioning and exposure to ammonia in larval habitats in Yaounde, the M form showed greater tolerance to ammonia compared to the S form. This trait may be part of the physiological machinery allowing forest populations of the M form to colonize polluted larval habitats, which is at the heart of its niche expansion in densely populated human settlements in Cameroon.

Anamaria A. Camargo,  Alvaro Alonso-Garbayo (2006)
We provide a global assessment, with detailed multi-scale data, of the ecological and toxicological effects generated by inorganic nitrogen pollution in aquatic ecosystems. Our synthesis of the published scientific literature shows three major environmental problems: (1) it can increase the concentration of hydrogen ions in freshwater ecosystems without much acid-neutralizing capacity, resulting in acidification of those systems; (2) it can stimulate or enhance the development, maintenance and proliferation of primary producers, resulting in eutrophication of aquatic ecosystems; (3) it can reach toxic levels that impair the ability of aquatic animals to survive, grow and reproduce. Inorganic nitrogen pollution of ground and surface waters can also induce adverse effects on human health and economy. Because reductions in SO2 emissions have reduced the atmospheric deposition of H2SO4 across large portions of North America and Europe, while emissions of NOx have gone unchecked, HNO3 is now playing an increasing role in the acidification of freshwater ecosystems. This acidification process has caused several adverse effects on primary and secondary producers, with significant biotic impoverishments, particularly concerning invertebrates and fishes, in many atmospherically acidified lakes and streams. The cultural eutrophication of freshwater, estuarine, and coastal marine ecosystems can cause ecological and toxicological effects that are either directly or indirectly related to the proliferation of primary producers. Extensive kills of both invertebrates and fishes are probably the most dramatic manifestation of hypoxia (or anoxia) in eutrophic and hypereutrophic aquatic ecosystems with low water turnover rates. The decline in dissolved oxygen concentrations can also promote the formation of reduced compounds, such as hydrogen sulphide, resulting in higher adverse (toxic) effects on aquatic animals. Additionally, the occurrence of toxic algae can significantly contribute to the extensive kills of aquatic animals. Cyanobacteria, dinoflagellates and diatoms appear to be major responsible that may be stimulated by inorganic nitrogen pollution. Among the different inorganic nitrogenous compounds (NH4+, NH3, NO2-, HNO2NO3-) that aquatic animals can take up directly from the ambient water, unionized ammonia is the most toxic, while ammonium and nitrate ions are the least toxic. In general, seawater animals seem to be more tolerant to the toxicity of inorganic nitrogenous compounds than freshwater animals, probably because of the ameliorating effect of water salinity (sodium, chloride, calcium and other ions) on the tolerance of aquatic animals. Ingested nitrites and nitrates from polluted drinking waters can induce methemoglobinemia in humans, particularly in young infants, by blocking the oxygen-carrying capacity of hemoglobin. Ingested nitrites and nitrates also have a potential role in developing cancers of the digestive tract through their contribution to the formation of nitrosamines. In addition, some scientific evidences suggest that ingested nitrites and nitrates might result in mutagenicity, teratogenicity and birth defects, contribute to the risks of non-Hodgkin's lymphoma and bladder and ovarian cancers, play a role in the etiology of insulin-dependent diabetes mellitus and in the development of thyroid hypertrophy, or cause spontaneous abortions and respiratory tract infections. Indirect health hazards can occur as a consequence of algal toxins, causing nausea, vomiting, diarrhoea, pneumonia, gastroenteritis, hepatoenteritis, muscular cramps, and several poisoning syndromes (paralytic shellfish poisoning, neurotoxic shellfish poisoning, amnesic shellfish poisoning). Other indirect health hazards can also come from the potential relationship between inorganic nitrogen pollution and human infectious diseases (malaria, cholera). Human sickness and death, extensive kills of aquatic animals, and other negative effects, can have elevated costs on human economy, with the recreation and tourism industry suffering the most important economic impacts, at least locally. It is concluded that levels of total nitrogen lower than 0.5-1.0 mg TN/L could prevent aquatic ecosystems (excluding those ecosystems with naturally high N levels) from developing acidification and eutrophication, at least by inorganic nitrogen pollution. Those relatively low TN levels could also protect aquatic animals against the toxicity of inorganic nitrogenous compounds since, in the absence of eutrophication, surface waters usually present relatively high concentrations of dissolved oxygen, most inorganic reactive nitrogen being in the form of nitrate. Additionally, human health and economy would be safer from the adverse effects of inorganic nitrogen pollution.