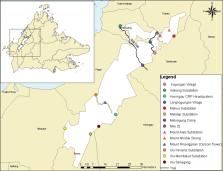 This paper reports the mosses from Crocker Range Park (CRP) in Sabah, Malaysian Borneo. In total, 293 species, three subspecies and eight varieties belonging to 118 genera and 36 families are reported. This represents about 40% and 47% of the species and infra-specific taxa reported from Borneo and Sabah, respectively. Out of these, six species are new records for Borneo, namely Barbella horridula , Chaetomitrium lancifolium , Distichophyllum leiopogon , Rhaphidostichum luzonense , Rosulabryum capillare and Taxiphyllum taxirameum and 12 species and one variety are new to Sabah. With these additions, the current number of mosses in Sabah and Borneo are 651 and 766, respectively. The largest family of mosses is Calymperaceae with 35 species and one subspecies, followed by Sematophyllaceae with 32 species and two varieties and Pylaisiadelphaceae with 21 species and one variety. In conclusion, CRP has a very high species richness of mosses which is the second highest in Borneo, after Mount Kinabalu.

Eusociality: from the first foragers to the first states. Introduction to the special issue.

Laura Betzig (2014)
People have always been social. Ethnographic evidence suggests that transfers of food and labor are common among contemporary hunter-gatherers, and they probably were common in Paleolithic groups. Archaeological evidence suggests that cooperative breeding went up as we settled down: as territory defenders became more successful breeders, their helpers' fertility would have been delayed or depressed. And written evidence from the Neolithic suggests that the first civilizations were often eusocial; emperors fathered hundreds of children, who were provided for and protected by workers in sterile castes. Papers in this issue of Human Nature look at helpers and workers across the eusociality continuum--from hard-working grandmothers and grandfathers, to celibate sisters and brothers, to castrated civil servants--from the first foragers to the first states.