Iatrogenic Dysnatremias in Children with Acute Gastroenteritis in High-Income Countries: A Systematic Review 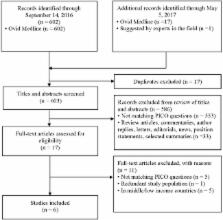 Acute gastroenteritis (AGE) causing dehydration with or without dysnatremias is a common childhood health challenge. While it is accepted that oral rehydration therapy is preferred, clinical factors or parent and healthcare provider preferences may lead to intravenous rehydration (IVR). Isotonic solutions are increasingly recommended in most scenarios requiring IVR. Nevertheless, children with AGE, having ongoing losses of water and electrolytes, represent a unique population.

To evaluate the association between acquired dysnatremias and IVR in children with AGE.

A systematic search of MEDLINE database was conducted through September 14, 2016. Observational studies and clinical trials conducted in high-income countries were included. The Grades of Recommendation, Assessment, Development, and Evaluation approach was used to evaluate the overall quality of evidence for each outcome.

603 papers were identified of which 6 were included (3 randomized controlled trials and 3 observational studies). Pooling of patient data was not possible due to significantly different interventions or exposures. Single studies results demonstrated that within 24 h, administration of isotonic saline was not associated with a significant decline in serum sodium while hypotonic solutions (0.2–0.45% saline) were associated, in one study, with mean serum sodium declines from 1.3 mEq/L (139.2, SD 2.9–137.9, SD 2.5) in 133 young infants (aged 1–28 months), to 5.7 (SD 3.1) mEq/L in a subgroup of 18 older children (age mean 5.8, SD 2.7 years). Both isotonic and hypotonic saline were shown to be associated with improvement of baseline hyponatremia in different studies. Baseline hypernatremia was corrected within 4–24 h in 81/83 (99.6%) children using hypotonic saline IVR.

There is a paucity of publications assessing the risk for acquired dysnatremias associated with IVR in children with AGE. Current high-quality evidence suggests that, short-term use of isotonic solutions is safe and effective in most children with AGE; hypotonic solutions may also be appropriate in some subpopulations, however, the quality of available evidence is low to very low. Further research investigating outcomes associated with IVR use beyond 24 h focusing on specific age groups is required.

The maintenance need for water in parenteral fluid therapy.

Validity and reliability of clinical signs in the diagnosis of dehydration in children.

O Murphy,  M Gorelick,  K. Shaw (1997)
To determine the validity and reliability of various clinical findings in the diagnosis of dehydration in children. Prospective cohort study. An urban pediatric hospital emergency department. One hundred eighty-six children ranging in age from 1 month to 5 years old with diarrhea, vomiting, or poor oral fluid intake, either admitted or followed as outpatients. Exclusion criteria included malnutrition, recent prior therapy at another facility, symptoms for longer than 5 days' duration, and hyponatremia or hypernatremia. All children were evaluated for 10 clinical signs before treatment. The diagnostic standard for dehydration was fluid deficit as determined from serial weight gain after treatment. Sixty-three children (34%) had dehydration, defined as a deficit of 5% or more of body weight. At this deficit, clinical signs were already apparent (median = 5). Individual findings had generally low sensitivity and high specificity, although parent report of decreased urine output was sensitive but not specific. The presence of any three or more signs had a sensitivity of 87% and specificity of 82% for detecting a deficit of 5% or more. A subset of four factors-capillary refill >2 seconds, absent tears, dry mucous membranes, and ill general appearance-predicted dehydration as well as the entire set, with the presence of any two or more of these signs indicating a deficit of at least 5%. Interobserver reliability was good to excellent for all but one of the findings studied (quality of respirations). Conventionally used clinical signs of dehydration are valid and reliable; however, individual findings lack sensitivity. Diagnosis of clinically important dehydration should be based on the presence of at least three clinical findings.

Hyponatraemia and death or permanent brain damage in healthy children.

J C Ayus,  A Arieff,  Michelle L Fraser (1992)
To determine if hyponatraemia causes permanent brain damage in healthy children and, if so, if the disorder is primarily limited to females, as occurs in adults. Prospective clinical case study of 16 affected children and a review of 24,412 consecutive surgical admissions at one medical centre. 16 children (nine male, seven female; age 7 (SD 5) years) with generally minor illness were electively hospitalised for primary care. Consultation was obtained for the combination of respiratory arrest with symptomatic hyponatraemia (serum sodium concentration less than or equal to 128 mmol/l). Presence, gender distribution, and classification of permanent brain damage in children with symptomatic hyponatraemia in both prospective and retrospective studies. By retrospective evaluation the incidence of postoperative hyponatraemia among 24,412 patients was 0.34% (83 cases) and mortality of those afflicted was 8.4% (seven deaths). In the prospective population the serum sodium concentration on admission was 138 (SD 2) mmol/l. From three to 120 inpatient hours after hypotonic fluid administration patients developed progressive lethargy, headache, nausea, and emesis with an explosive onset of respiratory arrest. At the time serum sodium concentration was 115 (7) mmol/l and arterial oxygen tension 6 (1.5) kPa. The hyponatraemia was primarily caused by extrarenal loss of electrolytes with replacement by hypotonic fluids. All 16 patients had cerebral oedema detected at either radiological or postmortem examination. All 15 patients not treated for their hyponatraemia in a timely manner either died or were permanently incapacitated by brain damage. The only patient treated in a timely manner was alive but mentally retarded. Symptomatic hyponatraemia can result in high morbidity in children of both genders, which is due in large part to inadequate brain adaptation and lack of timely treatment.

Specialty section: This article was submitted to Pediatric Nephrology, a section of the journal Frontiers in Pediatrics