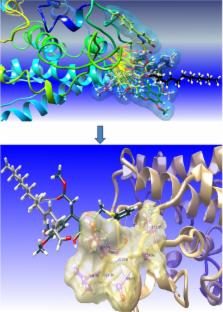 Wnt-4 (wingless mouse mammary tumor virus integration site-4) protein is involved in many crucial embryonic pathways regulating essential processes. Aberrant Wnt-4 activity causes various anomalies leading to gastric, colon, or breast cancer. Wnt-4 is a conserved protein in structure and sequence. All Wnt proteins contain an unusual fold comprising of a thumb (or N-terminal domain) and index finger (or C-terminal domain) bifurcated by a palm domain. The aim of this study was to identify the best inhibitors of Wnt-4 that not only interact with Wnt-4 protein but also with the covalently bound acyl group to inhibit aberrant Wnt-4 activity. A systematic computational approach was used to analyze inhibition of Wnt-4. Palmitoleic acid was docked into Wnt-4 protein, followed by ligand-based virtual screening of nearly 209,847 compounds; conformer generation of 271 compounds resulted from extensive virtual screening and comparative docking of 10,531 conformers of 271 unique compounds through GOLD (Genetic Optimization for Ligand Docking), AutoDock-Vina, and FRED (Fast Rigid Exhaustive Docking) was subsequently performed. Linux scripts was used to handle the libraries of compounds. The best compounds were selected on the basis of having maximum interactions to protein with bound palmitoleic acid. These represented lead inhibitors in further experiments. Palmitoleic acid is important for efficient Wnt activity, but aberrant Wnt-4 expression can be inhibited by designing inhibitors interacting with both protein and palmitoleic acid.

C Dobson (2003)
The manner in which a newly synthesized chain of amino acids transforms itself into a perfectly folded protein depends both on the intrinsic properties of the amino-acid sequence and on multiple contributing influences from the crowded cellular milieu. Folding and unfolding are crucial ways of regulating biological activity and targeting proteins to different cellular locations. Aggregation of misfolded proteins that escape the cellular quality-control mechanisms is a common feature of a wide range of highly debilitating and increasingly prevalent diseases.

N. H. Putnam,  M Srivastava,  U Hellsten … (2007)
Sea anemones are seemingly primitive animals that, along with corals, jellyfish, and hydras, constitute the oldest eumetazoan phylum, the Cnidaria. Here, we report a comparative analysis of the draft genome of an emerging cnidarian model, the starlet sea anemone Nematostella vectensis. The sea anemone genome is complex, with a gene repertoire, exon-intron structure, and large-scale gene linkage more similar to vertebrates than to flies or nematodes, implying that the genome of the eumetazoan ancestor was similarly complex. Nearly one-fifth of the inferred genes of the ancestor are eumetazoan novelties, which are enriched for animal functions like cell signaling, adhesion, and synaptic transmission. Analysis of diverse pathways suggests that these gene "inventions" along the lineage leading to animals were likely already well integrated with preexisting eukaryotic genes in the eumetazoan progenitor.