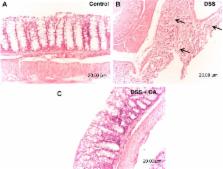 Gallic acid (GA) is a polyhydroxy phenolic compound that has been detected in various natural products, such as green tea, strawberries, grapes, bananas, and many other fruits. In inflammatory bowel disease, inflammation is promoted by oxidative stress. GA is a strong antioxidant; thus, we evaluated the cytoprotective and anti-inflammatory role of GA in a dextran sulfate sodium (DSS)-induced mouse colitis model. Experimental acute colitis was induced in male BALB/c mice by administering 2.5% DSS in the drinking water for 7 days. The disease activity index; colon weight/length ratio; histopathological analysis; mRNA expressions of IL-21 and IL-23; and protein expression of nuclear erythroid 2-related factor 2 (Nrf2) were compared between the control and experimental mice. The colonic content of malondialdehyde and the activities of superoxide dismutase, catalase, glutathione peroxidase, and glutathione reductase activity were examined as parameters of the redox state. We determined that GA significantly attenuated the disease activity index and colon shortening, and reduced the histopathological evidence of injury. GA also significantly ( P<0.05) reduced the expressions of IL-21 and IL-23. Furthermore, GA activates/upregulates the expression of Nrf2 and its downstream targets, including UDP-GT and NQO1, in DSS-induced mice. The findings of this study demonstrate the protective effect of GA on experimental colitis, which is probably due to an antioxidant nature of GA.

Selenium: biochemical role as a component of glutathione peroxidase.

Makoto Kobayashi,  Masayuki Yamamoto (2015)
Several years have passed since NF-E2-related factor 2 (Nrf2) was demonstrated to regulate the induction of genes encoding antioxidant proteins and phase 2 detoxifying enzymes. Following a number of studies, it was realized that Nrf2 is a key factor for cytoprotection in various aspects, such as anticarcinogenicity, neuroprotection, antiinflammatory response, and so forth. These widespread functions of Nrf2 spring from the coordinated actions of various categories of target genes. The activation mechanism of Nrf2 has been studied extensively. Under normal conditions, Nrf2 localizes in the cytoplasm where it interacts with the actin binding protein, Kelch-like ECH associating protein 1 (Keap1), and is rapidly degraded by the ubiquitin-proteasome pathway. Signals from reactive oxygen species or electrophilic insults target the Nrf2-Keap1 complex, dissociating Nrf2 from Keap1. Stabilized Nrf2 then translocates to the nuclei and transactivates its target genes. Interestingly, Keap1 is now assumed to be a substrate-specific adaptor of Cul3-based E3 ubiquitin ligase. Direct participation of Keap1 in the ubiquitination and degradation of Nrf2 is plausible. The Nrf2-Keap1 system is present not only in mammals, but in fish, suggesting that its roles in cellular defense are conserved throughout evolution among vertebrates. This review article recounts recent knowledge of the Nrf2-Keap1 system, focusing especially on the molecular mechanism of Nrf2 regulation.