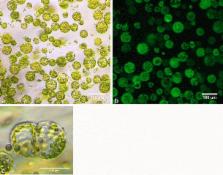 The mechanisms of plant cell dedifferentiation and the acquisition of totipotency are poorly understood. One of the methods to induce the dedifferentiation process in plant cells is simple and requires the removal of the cell wall. After cell wall removal in protoplasts, large-scale chromatin decondensation is observed (Tessadori et al. in J Cell Sci 120:1200–1208, 2007). Here, we show that in Arabidopsis thaliana protoplasts, despite chromatin decondensation, RNA polymerase II transcriptional activity is reduced. The subsequent investigated stages displayed a clear decrease in the quantity of 25S ribosomal RNA (rRNA) first and then poly(A+) RNA, particularly in the cytoplasm. Therefore, the reduced transcription activity and the removal of these RNA transcripts from the cytoplasm is a crucial process in obtaining totipotency in plant cells. After the cytoplasm cleaning of transcripts derived from mesophyll cells, we observed the resynthesis of these RNAs. An increase in the amount of examined molecules to a level similar to that in differentiated mesophyll cells precedes the divisions of already undifferentiated cells. In this work, we show changes in RNA polymerase II transcription dynamics and the quantity of poly(A+) RNA and 25S rRNA during dedifferentiation and re-entry into the cell cycle.

A chromatin landmark and transcription initiation at most promoters in human cells.

Matthew Guenther,  Stuart S. Levine,  Laurie A. Boyer … (2007)
We describe the results of a genome-wide analysis of human cells that suggests that most protein-coding genes, including most genes thought to be transcriptionally inactive, experience transcription initiation. We found that nucleosomes with H3K4me3 and H3K9,14Ac modifications, together with RNA polymerase II, occupy the promoters of most protein-coding genes in human embryonic stem cells. Only a subset of these genes produce detectable full-length transcripts and are occupied by nucleosomes with H3K36me3 modifications, a hallmark of elongation. The other genes experience transcription initiation but show no evidence of elongation, suggesting that they are predominantly regulated at postinitiation steps. Genes encoding most developmental regulators fall into this group. Our results also identify a class of genes that are excluded from experiencing transcription initiation, at which mechanisms that prevent initiation must predominate. These observations extend to differentiated cells, suggesting that transcription initiation at most genes is a general phenomenon in human cells.

Organization of cis-acting regulatory elements in osmotic- and cold-stress-responsive promoters.

Kazuko Yamaguchi-Shinozaki,  Kazuo Shinozaki (2005)
cis-Acting regulatory elements are important molecular switches involved in the transcriptional regulation of a dynamic network of gene activities controlling various biological processes, including abiotic stress responses, hormone responses and developmental processes. In particular, understanding regulatory gene networks in stress response cascades depends on successful functional analyses of cis-acting elements. The ever-improving accuracy of transcriptome expression profiling has led to the identification of various combinations of cis-acting elements in the promoter regions of stress-inducible genes involved in stress and hormone responses. Here we discuss major cis-acting elements, such as the ABA-responsive element (ABRE) and the dehydration-responsive element/C-repeat (DRE/CRT), that are a vital part of ABA-dependent and ABA-independent gene expression in osmotic and cold stress responses.