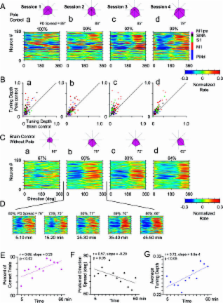 Reaching and grasping in primates depend on the coordination of neural activity in large frontoparietal ensembles. Here we demonstrate that primates can learn to reach and grasp virtual objects by controlling a robot arm through a closed-loop brain–machine interface (BMIc) that uses multiple mathematical models to extract several motor parameters (i.e., hand position, velocity, gripping force, and the EMGs of multiple arm muscles) from the electrical activity of frontoparietal neuronal ensembles. As single neurons typically contribute to the encoding of several motor parameters, we observed that high BMIc accuracy required recording from large neuronal ensembles. Continuous BMIc operation by monkeys led to significant improvements in both model predictions and behavioral performance. Using visual feedback, monkeys succeeded in producing robot reach-and-grasp movements even when their arms did not move. Learning to operate the BMIc was paralleled by functional reorganization in multiple cortical areas, suggesting that the dynamic properties of the BMIc were incorporated into motor and sensory cortical representations.

With visual feedback, macaque monkeys learn to control a robot arm through a neural interface which records activity from multiple cortical areas

Dawn Taylor, Stephen I Helms Tillery, Andrew B. Schwartz (2002)
Three-dimensional (3D) movement of neuroprosthetic devices can be controlled by the activity of cortical neurons when appropriate algorithms are used to decode intended movement in real time. Previous studies assumed that neurons maintain fixed tuning properties, and the studies used subjects who were unaware of the movements predicted by their recorded units. In this study, subjects had real-time visual feedback of their brain-controlled trajectories. Cell tuning properties changed when used for brain-controlled movements. By using control algorithms that track these changes, subjects made long sequences of 3D movements using far fewer cortical units than expected. Daily practice improved movement accuracy and the directional tuning of these units.

A spelling device for the paralysed.

Mijail Serruya, Nicholas G. Hatsopoulos, Liam Paninski … (2002)
The activity of motor cortex (MI) neurons conveys movement intent sufficiently well to be used as a control signal to operate artificial devices, but until now this has called for extensive training or has been confined to a limited movement repertoire. Here we show how activity from a few (7-30) MI neurons can be decoded into a signal that a monkey is able to use immediately to move a computer cursor to any new position in its workspace (14 degrees x 14 degrees visual angle). Our results, which are based on recordings made by an electrode array that is suitable for human use, indicate that neurally based control of movement may eventually be feasible in paralysed humans.