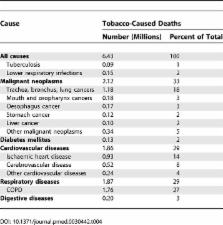 Global and regional projections of mortality and burden of disease by cause for the years 2000, 2010, and 2030 were published by Murray and Lopez in 1996 as part of the Global Burden of Disease project. These projections, which are based on 1990 data, continue to be widely quoted, although they are substantially outdated; in particular, they substantially underestimated the spread of HIV/AIDS. To address the widespread demand for information on likely future trends in global health, and thereby to support international health policy and priority setting, we have prepared new projections of mortality and burden of disease to 2030 starting from World Health Organization estimates of mortality and burden of disease for 2002. This paper describes the methods, assumptions, input data, and results.

Relatively simple models were used to project future health trends under three scenarios—baseline, optimistic, and pessimistic—based largely on projections of economic and social development, and using the historically observed relationships of these with cause-specific mortality rates. Data inputs have been updated to take account of the greater availability of death registration data and the latest available projections for HIV/AIDS, income, human capital, tobacco smoking, body mass index, and other inputs. In all three scenarios there is a dramatic shift in the distribution of deaths from younger to older ages and from communicable, maternal, perinatal, and nutritional causes to noncommunicable disease causes. The risk of death for children younger than 5 y is projected to fall by nearly 50% in the baseline scenario between 2002 and 2030. The proportion of deaths due to noncommunicable disease is projected to rise from 59% in 2002 to 69% in 2030. Global HIV/AIDS deaths are projected to rise from 2.8 million in 2002 to 6.5 million in 2030 under the baseline scenario, which assumes coverage with antiretroviral drugs reaches 80% by 2012. Under the optimistic scenario, which also assumes increased prevention activity, HIV/AIDS deaths are projected to drop to 3.7 million in 2030. Total tobacco-attributable deaths are projected to rise from 5.4 million in 2005 to 6.4 million in 2015 and 8.3 million in 2030 under our baseline scenario. Tobacco is projected to kill 50% more people in 2015 than HIV/AIDS, and to be responsible for 10% of all deaths globally. The three leading causes of burden of disease in 2030 are projected to include HIV/AIDS, unipolar depressive disorders, and ischaemic heart disease in the baseline and pessimistic scenarios. Road traffic accidents are the fourth leading cause in the baseline scenario, and the third leading cause ahead of ischaemic heart disease in the optimistic scenario. Under the baseline scenario, HIV/AIDS becomes the leading cause of burden of disease in middle- and low-income countries by 2015.

These projections represent a set of three visions of the future for population health, based on certain explicit assumptions. Despite the wide uncertainty ranges around future projections, they enable us to appreciate better the implications for health and health policy of currently observed trends, and the likely impact of fairly certain future trends, such as the ageing of the population, the continued spread of HIV/AIDS in many regions, and the continuation of the epidemiological transition in developing countries. The results depend strongly on the assumption that future mortality trends in poor countries will have a relationship to economic and social development similar to those that have occurred in the higher-income countries.

The presented projections suggest a dramatic shift in the distribution of deaths from younger to older ages and from communicable, maternal, perinatal, and nutritional causes to non-communicable disease causes. HIV/AIDS and tobacco remain major killers and possible targets for intervention.

For most of human history, little has been known about the main causes of illness in different countries and which diseases kill most people. But public-health officials need to know whether heart disease kills more people than cancer in their country, for example, or whether diabetes causes more disability than mental illness so that they can use their resources wisely. They also have to have some idea about how patterns of illness (morbidity) and death (mortality) are likely to change so that they can plan for the future. In the early 1990s, the World Bank sponsored the 1990 Global Burden of Disease study carried out by researchers at Harvard University and the World Health Organization (WHO). This study provided the first comprehensive, global estimates of death and illness by age, sex, and region. It also provided projections of the global burden of disease and mortality up to 2020 using models that assumed that health trends are related to a set of independent variables. These variables were income per person (as people become richer, they, live longer), average number of years of education (as this “human capital” increases, so does life expectancy), time (to allow for improved knowledge about various diseases), and tobacco use (a major global cause of illness and death).

These health projections have been widely used by WHO and governments to help them plan their health policies. However, because they are based on the 1990 estimates of the global burden of disease, the projections now need updating, particularly since they underestimate the spread of HIV/AIDS and the associated increase in death from tuberculosis. In this study, the researchers used similar methods to those used in the 1990 Global Burden of Disease study to prepare new projections of mortality and burden of disease up to 2030 starting from the 2002 WHO global estimates of mortality and burden of disease.

As before, the researchers used projections of socio-economic development to model future patterns of mortality and illness for a baseline scenario, a pessimistic scenario that assumed a slower rate of socio-economic development, and an optimistic scenario that assumed a faster rate of growth. Their analysis predicts that between 2002 and 2030 for all three scenarios life expectancy will increase around the world, fewer children younger than 5 years will die, and the proportion of people dying from non-communicable diseases such as heart disease and cancer will increase. Although deaths from infectious diseases will decrease overall, HIV/AIDS deaths will continue to increase; the exact magnitude of the increase will depend on how many people have access to antiretroviral drugs and the efficacy of prevention programs. But, even given the rise in HIV/AIDS deaths, the new projections predict that more people will die of tobacco-related disease than of HIV/AIDS in 2015. The researchers also predict that by 2030, the three leading causes of illness will be HIV/AIDS, depression, and ischaemic heart disease (problems caused by a poor blood supply to the heart) in the baseline and pessimistic scenarios; in the optimistic scenario, road-traffic accidents will replace heart disease as the third leading cause (there will be more traffic accidents with faster economic growth).

The models used by the researchers provide a wealth of information about possible patterns of global death and illness between 2002 and 2030, but because they include many assumptions, like all models, they can provide only indications of future trends, not absolute figures. For example, based on global mortality data from 2002, the researchers estimate that global deaths in 2030 will be 64.9 million under the optimistic scenario. However, the actual figure may be quite a bit bigger or smaller because accurate baseline counts of deaths were not available for every country in the world. Another limitation of the study is that the models used assume that future increases in prosperity in developing countries will affect their population's health in the same way as similar increases affected health in the past in countries with death registration data (these are mostly developed countries). However, even given these and other limitations, the projections reported in this study provide useful insights into the future health of the world. These can now be used by public-health officials to plan future policy and to monitor the effect of new public-health initiatives on the global burden of disease and death.

Sarah E Wild, Gojka Roglic, Anders Green … (2004)
The goal of this study was to estimate the prevalence of diabetes and the number of people of all ages with diabetes for years 2000 and 2030. Data on diabetes prevalence by age and sex from a limited number of countries were extrapolated to all 191 World Health Organization member states and applied to United Nations' population estimates for 2000 and 2030. Urban and rural populations were considered separately for developing countries. The prevalence of diabetes for all age-groups worldwide was estimated to be 2.8% in 2000 and 4.4% in 2030. The total number of people with diabetes is projected to rise from 171 million in 2000 to 366 million in 2030. The prevalence of diabetes is higher in men than women, but there are more women with diabetes than men. The urban population in developing countries is projected to double between 2000 and 2030. The most important demographic change to diabetes prevalence across the world appears to be the increase in the proportion of people >65 years of age. These findings indicate that the "diabetes epidemic" will continue even if levels of obesity remain constant. Given the increasing prevalence of obesity, it is likely that these figures provide an underestimate of future diabetes prevalence.

The global burden of disease: a comprehensive assessment of mortality and disability from disease, injuries and risk factors in 1990 and projected to 2020

* To whom correspondence should be addressed. E-mail: mathersc@ 123456who.int

Related article ( companion): Are We Publishing "The Right Stuff"?