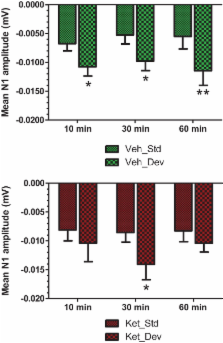 Schizophrenia patients exhibit a decreased ability to detect change in their auditory environment as measured by auditory event-related potentials (ERP) such as mismatch negativity. This deficit has been linked to abnormal NMDA neurotransmission since, among other observations, non-selective channel blockers of NMDA reliably diminish automatic deviance detection in human subjects as well as in animal models. Recent molecular and functional evidence links NR2B receptor subtype to aberrant NMDA transmission in schizophrenia. However, it is unknown if NR2B receptors participate in pre-attentive deviance detection. We recorded ERP from the vertex of freely behaving rats in response to frequency mismatch protocols. We saw a robust increase in N1 response to deviants compared to standard as well as control stimuli indicating true deviance detection. Moreover, the increased negativity was highly sensitive to deviant probability. Next, we tested the effect of a non-selective NMDA channel blocker (ketamine, 30 mg/kg) and a highly selective NR2B antagonist, CP-101,606 (10 or 30 mg/kg) on deviance detection. Ketamine attenuated deviance mainly by increasing the amplitude of the standard ERP. Amplitude and/or latency of several ERP components were also markedly affected. In contrast, CP-101,606 robustly and dose-dependently inhibited the deviant’s N1 amplitude, and as a consequence, completely abolished deviance detection. No other ERPs or components were affected. Thus, we report first evidence that NR2B receptors robustly participate in processes of automatic deviance detection in a rodent model. Lastly, our model demonstrates a path forward to test specific pharmacological hypotheses using translational endpoints relevant to aberrant sensory processing in schizophrenia.

Lisa Grace,  Lawrence W. Green,  Daniel Javitt … (2008)
Many risk genes interact synergistically to produce schizophrenia and many neurotransmitter interactions have been implicated. We have developed a circuit-based framework for understanding gene and neurotransmitter interactions. NMDAR hypofunction has been implicated in schizophrenia because NMDAR antagonists reproduce symptoms of the disease. One action of antagonists is to reduce the excitation of fast-spiking interneurons, resulting in disinhibition of pyramidal cells. Overactive pyramidal cells, notably those in the hippocampus, can drive a hyperdopaminergic state that produces psychosis. Additional aspects of interneuron function can be understood in this framework, as follows. (i) In animal models, NMDAR antagonists reduce parvalbumin and GAD67, as found in schizophrenia. These changes produce further disinhibition and can be viewed as the aberrant response of a homeostatic system having a faulty activity sensor (the NMDAR). (ii) Disinhibition decreases the power of gamma oscillation and might thereby produce negative and cognitive symptoms. (iii) Nicotine enhances the output of interneurons, and might thereby contribute to its therapeutic effect in schizophrenia.

Neural mechanisms of involuntary attention to acoustic novelty and change.

K Alho,  I Winkler,  R Näätänen … (1998)
Behavioral and event-related brain potential (ERP) measures were used to elucidate the neural mechanisms of involuntary engagement of attention by novelty and change in the acoustic environment. The behavioral measures consisted of the reaction time (RT) and performance accuracy (hit rate) in a forced-choice visual RT task where subjects were to discriminate between odd and even numbers. Each visual stimulus was preceded by an irrelevant auditory stimulus, which was randomly either a "standard" tone (80%), a slightly higher "deviant" tone (10%), or a natural, "novel" sound (10%). Novel sounds prolonged the RT to successive visual stimuli by 17 msec as compared with the RT to visual stimuli that followed standard tones. Deviant tones, in turn, decreased the hit rate but did not significantly affect the RT. In the ERPs to deviant tones, the mismatch negativity (MMN), peaking at 150 msec, and a second negativity, peaking at 400 msec, could be observed. Novel sounds elicited an enhanced N1, with a probable overlap by the MMN, and a large positive P3a response with two different subcomponents: an early centrally dominant P3a, peaking at 230 msec, and a late P3a, peaking at 315 msec with a right-frontal scalp maximum. The present results suggest the involvement of two different neural mechanisms in triggering involuntary attention to acoustic novelty and change: a transient-detector mechanism activated by novel sounds and reflected in the N1 and a stimulus-change detector mechanism activated by deviant tones and novel sounds and reflected in the MMN. The observed differential distracting effects by slightly deviant tones and widely deviant novel sounds support the notion of two separate mechanisms of involuntary attention.

Patrick May,  Hannu Tiitinen (2010)
The current review constitutes the first comprehensive look at the possibility that the mismatch negativity (MMN, the deflection of the auditory ERP/ERF elicited by stimulus change) might be generated by so-called fresh-afferent neuronal activity. This possibility has been repeatedly ruled out for the past 30 years, with the prevailing theoretical accounts relying on a memory-based explanation instead. We propose that the MMN is, in essence, a latency- and amplitude-modulated expression of the auditory N1 response, generated by fresh-afferent activity of cortical neurons that are under nonuniform levels of adaptation.

This article was submitted to Schizophrenia, a section of the journal Frontiers in Psychiatry.