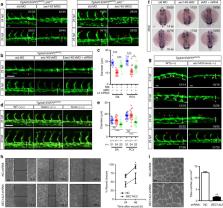 Vascular endothelial growth factor (VEGF) regulates vasculogenesis by using its tyrosine kinase receptors. However, little is known about whether Sec14-like phosphatidylinositol transfer proteins (PTP) are involved in this process. Here, we show that zebrafish sec14l3, one of the family members, specifically participates in artery and vein formation via regulating angioblasts and subsequent venous progenitors’ migration during vasculogenesis. Vascular defects caused by sec14l3 depletion are partially rescued by restoration of VEGFR2 signaling at the receptor or downstream effector level. Biochemical analyses show that Sec14l3/SEC14L2 physically bind to VEGFR2 and prevent it from dephosphorylation specifically at the Y 1175 site by peri-membrane tyrosine phosphatase PTP1B, therefore potentiating VEGFR2 signaling activation. Meanwhile, Sec14l3 and SEC14L2 interact with RAB5A/4A and facilitate the formation of their GTP-bound states, which might be critical for VEGFR2 endocytic trafficking. Thus, we conclude that Sec14l3 controls vasculogenesis in zebrafish via the regulation of VEGFR2 activation.

The growth factor VEGF is known to regulate vasculogenesis but the downstream pathways activated are unclear. Here, the authors report that Sec14l3, a member of the PITP (phosphatidyl inositol transfer proteins) family regulates the formation of zebrafish vasculature by promoting VEGFR2 endocytic trafficking.

Michael Simons,  Emma Gordon,  Lena Claesson-Welsh (2016)
Vascular endothelial growth factors (VEGFs) and their receptors (VEGFRs) are uniquely required to balance the formation of new blood vessels with the maintenance and remodelling of existing ones, during development and in adult tissues. Recent advances have greatly expanded our understanding of the tight and multi-level regulation of VEGFR2 signalling, which is the primary focus of this Review. Important insights have been gained into the regulatory roles of VEGFR-interacting proteins (such as neuropilins, proteoglycans, integrins and protein tyrosine phosphatases); the dynamics of VEGFR2 endocytosis, trafficking and signalling; and the crosstalk between VEGF-induced signalling and other endothelial signalling cascades. A clear understanding of this multifaceted signalling web is key to successful therapeutic suppression or stimulation of vascular growth.

Alexander Sorkin,  Gina Zastrow (2009)
Cell signalling and endocytic membrane trafficking have traditionally been viewed as distinct processes. Although our present understanding is incomplete and there are still great controversies, it is now recognized that these processes are intimately and bidirectionally linked in animal cells. Indeed, many recent examples illustrate how endocytosis regulates receptor signalling (including signalling from receptor tyrosine kinases and G protein-coupled receptors) and, conversely, how signalling regulates the endocytic pathway. The mechanistic and functional principles that underlie the relationship between signalling and endocytosis in cell biology are becoming increasingly evident across many systems.