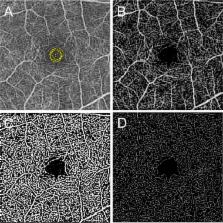 Retrospective, cross-sectional, observational study of healthy and diabetic adult subjects with and without DR. Retinal microvascular changes were assessed by using SD-OCTA images and an intensity-based optical microangiography algorithm. A semiautomated program was used to calculate indices of microvascular density and morphology in nonsegmented and segmented SD-OCTA images. Microvascular density was quantified by using skeleton density (SD) and vessel density (VD), while vessel morphology was quantified as fractal dimension (FD) and vessel diameter index (VDI). Statistical analyses were performed by using the Student's t-test or analysis of variance with post hoc Tukey honest significant difference tests for multiple comparisons.

Yali Jia,  Ou Tan,  Jason Tokayer … (2012)
Amplitude decorrelation measurement is sensitive to transverse flow and immune to phase noise in comparison to Doppler and other phase-based approaches. However, the high axial resolution of OCT makes it very sensitive to the pulsatile bulk motion noise in the axial direction. To overcome this limitation, we developed split-spectrum amplitude-decorrelation angiography (SSADA) to improve the signal-to-noise ratio (SNR) of flow detection. The full OCT spectrum was split into several narrower bands. Inter-B-scan decorrelation was computed using the spectral bands separately and then averaged. The SSADA algorithm was tested on in vivo images of the human macula and optic nerve head. It significantly improved both SNR for flow detection and connectivity of microvascular network when compared to other amplitude-decorrelation algorithms.

(1991)
The modified Airlie House classification of diabetic retinopathy has been extended for use in the Early Treatment Diabetic Retinopathy Study (ETDRS). The revised classification provides additional steps in the grading scale for some characteristics, separates other characteristics previously combined, expands the section on macular edema, and adds several characteristics not previously graded. The classification is described and illustrated and its reproducibility between graders is assessed by calculating percentages of agreement and kappa statistics for duplicate gradings of baseline color nonsimultaneous stereoscopic fundus photographs. For retinal hemorrhages and/or microaneurysms, hard exudates, new vessels, fibrous proliferations, and macular edema, agreement was substantial (weighted kappa, 0.61 to 0.80). For soft exudates, intraretinal microvascular abnormalities, and venous beading, agreement was moderate (weighted kappa, 0.41 to 0.60). A double grading system, with adjudication of disagreements of two or more steps between duplicate gradings, led to some improvement in reproducibility for most characteristics.

AYK and ZC contributed equally to the work presented here and should therefore be regarded as equivalent authors.