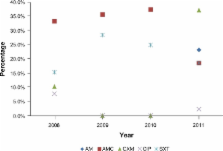 Nontyphoidal Salmonella (NTS) species are important food-borne pathogens that cause gastroenteritis and bacteremia, and are responsible for a huge global burden of morbidity and mortality. The aim of this study was to investigate the prevalent serogroups and antibiotic resistance of NTS in our region.

We reviewed the serogroup distribution and antimicrobial susceptibility patterns of NTS strains obtained from 158 stool specimens of patients with acute diarrheal infection attending the outpatient and inpatient department at a university hospital in the Eastern Province of Saudi Arabia in the period from September, 2008 to April, 2011. A retrospective analysis of the 158 patients with NTS infection was conducted to determine the most prevalent NTS serogroups causing acute gastroenteritis and their antimicrobial susceptibility patterns.

The findings of this study support the concern that use of antibiotics in animal feeds may contribute to acquisition of resistance in food-borne bacteria, such as Salmonella. Our study also concludes that the prevalence of NTS in the Eastern Province of Saudi Arabia is very low compared with other studies worldwide.

B. O’Brien,  ,  Martyn Kirk … (2010)
To estimate the global burden of nontyphoidal Salmonella gastroenteritis, we synthesized existing data from laboratory-based surveillance and special studies, with a hierarchical preference to (1) prospective population-based studies, (2) "multiplier studies," (3) disease notifications, (4) returning traveler data, and (5) extrapolation. We applied incidence estimates to population projections for the 21 Global Burden of Disease regions to calculate regional numbers of cases, which were summed to provide a global number of cases. Uncertainty calculations were performed using Monte Carlo simulation. We estimated that 93.8 million cases (5th to 95th percentile, 61.8-131.6 million) of gastroenteritis due to Salmonella species occur globally each year, with 155,000 deaths (5th to 95th percentile, 39,000-303,000 deaths). Of these, we estimated 80.3 million cases were foodborne. Salmonella infection represents a considerable burden in both developing and developed countries. Efforts to reduce transmission of salmonellae by food and other routes must be implemented on a global scale.

FoodNet estimate of the burden of illness caused by nontyphoidal Salmonella infections in the United States.

Monica Farley,  Andrew Voetsch,  V Deneen … (2004)
To determine the burden of Salmonella infections in the United States, Foodborne Diseases Active Surveillance Network (FoodNet) investigators conducted population-based active surveillance for culture-confirmed Salmonella infections during 1996-1999 at FoodNet laboratories. In addition, all clinical microbiology FoodNet laboratories were surveyed to determine their practices for isolating Salmonella. Telephone interviews were also conducted among residents of the FoodNet sites to determine the proportion of persons with diarrheal illness who sought medical care and the proportion who submitted stool specimens for bacterial culture. Using our model, we estimated that there were 1.4 million nontyphoidal Salmonella infections in the United States, resulting in 168,000 physician office visits per year during 1996-1999. Including both culture-confirmed infections and those not confirmed by culture, we estimated that Salmonella infections resulted in 15,000 hospitalizations and 400 deaths annually. These estimates indicate that salmonellosis presents a major ongoing burden to public health.

Trends in indigenous foodborne disease and deaths, England and Wales: 1992 to 2000.

B. O’Brien,  Goutam K. Adak,  S Long (2002)
Commitment to food safety is evidenced by high profile governmental initiatives around the globe. To measure progress towards targets, policy makers need to know the baseline from which they started. To describe the burden (mortality, morbidity, new presentations to general practice, hospital admissions, and hospital occupancy) and trends of indigenous foodborne disease (IFD) in England and Wales between 1992 and 2000. Routinely available surveillance data, special survey data, and hospital episode statistics were collated and arithmetic employed to estimate the burden and trends of IFD in England and Wales. Adjustments were made for underascertainment of disease through national surveillance and for foreign travel. The final estimates were compared with those from the USA. In 1995 there were an estimated 2,365,909 cases, 21,138 hospital admissions, and 718 deaths in England and Wales due to IFD. By 2000 this had fallen to 1,338,772 cases, 20,759 hospital admissions, and 480 deaths. In terms of disease burden the most important pathogens were campylobacters, salmonellas, Clostridium perfringens, verocytotoxin producing Escherichia coli (VTEC) O157, and Listeria monocytogenes. The ratio of food related illness in the USA to IFD in England and Wales in 2000 was 57:1. Taking into account population rates, this ratio fell to 11:1 and converged when aetiology and disease severity were considered. Reducing IFD in England and Wales means tackling campylobacter. Lowering mortality rates however also requires better control and prevention of salmonellas, Cl perfringens, L monocytogenes, and VTEC O157.