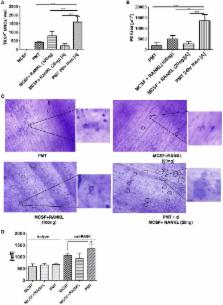 Bone remodeling is a continuous process to retain the structural integrity and function of the skeleton. A tight coupling is maintained between osteoclast-mediated resorption of old or damaged bones and osteoblast-mediated formation of new bones for bone homeostasis. While osteoblasts differentiate from mesenchymal stem cells, osteoclasts are hematopoietic in origin and derived from myeloid precursor cells. Osteoclast differentiation is driven by two cytokines, cytokine receptor activator of NF-κB ligand (RANKL), and macrophage colony-stimulating factor. Imbalances in the activity of osteoblasts and osteoclasts result in the development of bone disorders. Bacterially caused porcine atrophic rhinitis is characterized by a loss of nasal ventral conche bones and a distortion of the snout. While Bordetella bronchiseptica strains cause mild and reversible symptoms, infection of pigs with toxigenic Pasteurella multocida strains causes a severe and irreversible decay. The responsible virulence factor Pasteurella multocida toxin (PMT) contains a deamidase activity in its catalytical domain that constitutively activates specific heterotrimeric G proteins to induce downstream signaling cascades. While osteoblasts are inhibited by the toxin, osteoclasts are activated, thus skewing bone remodeling toward excessive bone degradation. Still, the mechanism by which PMT interferes with bone homeostasis, and the reason for this unusual target tissue is not yet well understood. Here, we show that PMT has the potential to differentiate bone marrow-derived macrophages into functional osteoclasts. This toxin-mediated differentiation process is independent of RANKL, a cytokine believed to be indispensable for triggering osteoclastogenesis, as addition of osteoprotegerin to PMT-treated macrophages does not show any effect on PMT-induced osteoclast formation. Although RANKL is not a prerequisite, toxin-primed macrophages show enhanced responsiveness to low concentrations of RANKL, suggesting that the PMT-generated microenvironment offers conditions where low concentrations of RANKL lead to an increase in the number of osteoclasts resulting in increased resorption. PMT-mediated release of the osteoclastogenic cytokines such as IL-6 and TNF-α, but not IL-1, supports the differentiation process. Although the production of cytokines and the subsequent activation of signaling cascades are necessary for PMT-mediated differentiation into osteoclasts, they are not sufficient and PMT-induced activation of G protein signaling is essential for efficient osteoclastogenesis.

Osteoprotegerin: a novel secreted protein involved in the regulation of bone density.

W.S Simonet,  D.L Lacey,  C.R Dunstan … (1997)
A novel secreted glycoprotein that regulates bone resorption has been identified. The protein, termed Osteoprotegerin (OPG), is a novel member of the TNF receptor superfamily. In vivo, hepatic expression of OPG in transgenic mice results in a profound yet nonlethal osteopetrosis, coincident with a decrease in later stages of osteoclast differentiation. These same effects are observed upon administration of recombinant OPG into normal mice. In vitro, osteoclast differentiation from precursor cells is blocked in a dose-dependent manner by recombinant OPG. Furthermore, OPG blocks ovariectomy-associated bone loss in rats. These data show that OPG can act as a soluble factor in the regulation of bone mass and imply a utility for OPG in the treatment of osteoporosis associated with increased osteoclast activity.

Susan Teitelbaum (2000)
Osteoporosis, a disease endemic in Western society, typically reflects an imbalance in skeletal turnover so that bone resorption exceeds bone formation. Bone resorption is the unique function of the osteoclast, and anti-osteoporosis therapy to date has targeted this cell. The osteoclast is a specialized macrophage polykaryon whose differentiation is principally regulated by macrophage colony-stimulating factor, RANK ligand, and osteoprotegerin. Reflecting integrin-mediated signals, the osteoclast develops a specialized cytoskeleton that permits it to establish an isolated microenvironment between itself and bone, wherein matrix degradation occurs by a process involving proton transport. Osteopetrotic mutants have provided a wealth of information about the genes that regulate the differentiation of osteoclasts and their capacity to resorb bone.

Role of cytokines in rheumatoid arthritis.

Rodney Feldmann,  A. J. Brennan,  R Maini (1995)
Analysis of cytokine mRNA and protein in rheumatoid arthritis tissue revealed that many proinflammatory cytokines such as TNF alpha, IL-1, IL-6, GM-CSF, and chemokines such as IL-8 are abundant in all patients regardless of therapy. This is compensated to some degree by the increased production of anti-inflammatory cytokines such as IL-10 and TGF beta and cytokine inhibitors such as IL-1ra and soluble TNF-R. However, this upregulation in homeostatic regulatory mechanisms is not sufficient as these are unable to neutralize all the TNF alpha and IL-1 produced. In rheumatoid joint cell cultures that spontaneously produce IL-1, TNF alpha was the major dominant regulator of IL-1. Subsequently, other proinflammatory cytokines were also inhibited if TNF alpha was neutralized, leading to the new concept that the proinflammatory cytokines were linked in a network with TNF alpha at its apex. This led to the hypothesis that TNF alpha was of major importance in rheumatoid arthritis and was a therapeutic target. This hypothesis has been successfully tested in animal models, of, for example, collagen-induced arthritis, and these studies have provided the rationale for clinical trials of anti-TNF alpha therapy in patients with long-standing rheumatoid arthritis. Several clinical trials using a chimeric anti-TNF alpha antibody have shown marked clinical benefit, verifying the hypothesis that TNF alpha is of major importance in rheumatoid arthritis. Retreatment studies have also shown benefit in repeated relapses, indicating that the disease remains TNF alpha dependent. Overall these studies demonstrate that analysis of cytokine expression and regulation may yield effective therapeutic targets in inflammatory disease.