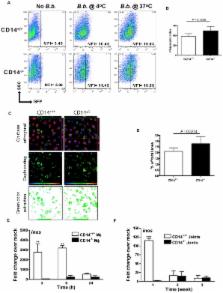 Current thinking emphasizes the primacy of CD14 in facilitating recognition of microbes by certain TLRs to initiate pro-inflammatory signaling events and the importance of p38-MAPK in augmenting such responses. Herein, this paradigm is challenged by demonstrating that recognition of live Borrelia burgdorferi not only triggers an inflammatory response in the absence of CD14, but one that is, in part, a consequence of altered PI3K/AKT/p38-MAPK signaling and impaired negative regulation of TLR2. CD14 deficiency results in increased localization of PI3K to lipid rafts, hyperphosphorylation of AKT, and reduced activation of p38. Such aberrant signaling leads to decreased negative regulation by SOCS1, SOCS3, and CIS, thereby compromising the induction of tolerance in macrophages and engendering more severe and persistent inflammatory responses to B. burgdorferi. Importantly, these altered signaling events and the higher cytokine production observed can be mimicked through shRNA and pharmacological inhibition of p38 activity in CD14-expressing macrophages. Perturbation of this CD14/p38-MAPK-dependent immune regulation may underlie development of infectious chronic inflammatory syndromes.

Macrophages express CD14 which partners with Toll-like receptor 2/1 to recognize bacterial lipoproteins such as those of Borrelia burgdorferi, the causative agent of Lyme disease. In vitro evidence demonstrates that blocking CD14 recognition of bacterial components ablates innate host cell inflammatory responses. Similarly, blocking downstream p38 kinase activity dampens the cellular response to these same microbial stimuli. This body of work underpins two well-established paradigms which cite the primacy of CD14 in facilitating TLR recognition of microbes to initiate proinflammatory signaling events and the importance of p38 in augmenting such responses. However, contrary to these paradigms, our prior study using a mouse model of Lyme disease demonstrated an association between CD14 deficiency, increased bacterial burden, and more severe and persistent disease. Herein, we provide a mechanistic explanation for this unanticipated host immune response implicating impaired negative regulation of inflammatory signaling pathways as an underlying cause. Consequent to impaired negative regulation the host becomes “intolerant” of continued exposure to bacteria and thus mounts a perpetual inflammatory response to their presence. An intriguing question raised by these findings is whether individual differences in the severity and clinical course of infection might reflect the susceptibility of the patient's innate immune system to tolerization.

Christoph Meinken,  Robert L. Modlin,  Diane L. Kamen … (2006)
In innate immune responses, activation of Toll-like receptors (TLRs) triggers direct antimicrobial activity against intracellular bacteria, which in murine, but not human, monocytes and macrophages is mediated principally by nitric oxide. We report here that TLR activation of human macrophages up-regulated expression of the vitamin D receptor and the vitamin D-1-hydroxylase genes, leading to induction of the antimicrobial peptide cathelicidin and killing of intracellular Mycobacterium tuberculosis. We also observed that sera from African-American individuals, known to have increased susceptibility to tuberculosis, had low 25-hydroxyvitamin D and were inefficient in supporting cathelicidin messenger RNA induction. These data support a link between TLRs and vitamin D-mediated innate immunity and suggest that differences in ability of human populations to produce vitamin D may contribute to susceptibility to microbial infection.

Sorting of GPI-anchored proteins to glycolipid-enriched membrane subdomains during transport to the apical cell surface.

Deborah Brown,  John K Rose (1992)
We show that a protein with a glycosylphosphatidyl inositol (GPI) anchor can be recovered from lysates of epithelial cells in a low density, detergent-insoluble form. Under these conditions, the protein is associated with detergent-resistant sheets and vesicles that contain other GPI-anchored proteins and are enriched in glycosphingolipids, but do not contain a basolateral marker protein. The protein is recovered in this complex only after it has been transported to the Golgi complex, suggesting that protein-sphingolipid microdomains form in the Golgi apparatus and plasma membrane and supporting the model proposed by Simons and colleagues for sorting of certain membrane proteins to the apical surface after intracellular association with glycosphingolipids.

Elizabeth Brint,  Foo Liew,  Luke A. O’Neill … (2005)
Toll-like receptors (TLRs) are involved in host defence against invading pathogens, functioning as primary sensors of microbial products and activating signalling pathways that induce the expression of immune and pro-inflammatory genes. However, TLRs have also been implicated in several immune-mediated and inflammatory diseases. As the immune system needs to constantly strike a balance between activation and inhibition to avoid detrimental and inappropriate inflammatory responses, TLR signalling must be tightly regulated. Here, we discuss the various negative regulatory mechanisms that have evolved to attenuate TLR signalling to maintain this immunological balance.

Publisher ID: 09-PLPA-RA-1339R2
DOI: 10.1371/journal.ppat.1000687
PMC ID: 2781632
PubMed ID: 20011115
Copyright statement: Sahay et al. This is an open-access article distributed under the terms of the Creative Commons Attribution License, which permits unrestricted use, distribution, and reproduction in any medium, provided the original author and source are credited.