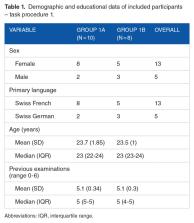 For the transfer task, median performance at post-acquisition testing showed a moderate effect size in favour of the group using MP ( r: −0.3), but the findings were not statistically significant ( P: 0.2). Similar results were found for the vestibular rehabilitation task ( r: 0.29; P: 0.21). In addition, the self-reported confidence was higher in the MP group.

Moderate effect sizes were identified in favour of MP at post-acquisition testing. In addition, the between-group difference was higher than the minimally important difference. The feasibility of the study was high based on quantitative feasibility measures such as the recruitment rate. Both these findings suggest larger well-powered studies should be considered to confirm the findings of this pilot study.

Journal of Education and Educational Development

Corina Schuster-Amft,  Roger Hilfiker,  Oliver Amft … (2011)
Background The literature suggests a beneficial effect of motor imagery (MI) if combined with physical practice, but detailed descriptions of MI training session (MITS) elements and temporal parameters are lacking. The aim of this review was to identify the characteristics of a successful MITS and compare these for different disciplines, MI session types, task focus, age, gender and MI modification during intervention. Methods An extended systematic literature search using 24 databases was performed for five disciplines: Education, Medicine, Music, Psychology and Sports. References that described an MI intervention that focused on motor skills, performance or strength improvement were included. Information describing 17 MITS elements was extracted based on the PETTLEP (physical, environment, timing, task, learning, emotion, perspective) approach. Seven elements describing the MITS temporal parameters were calculated: study duration, intervention duration, MITS duration, total MITS count, MITS per week, MI trials per MITS and total MI training time. Results Both independent reviewers found 96% congruity, which was tested on a random sample of 20% of all references. After selection, 133 studies reporting 141 MI interventions were included. The locations of the MITS and position of the participants during MI were task-specific. Participants received acoustic detailed MI instructions, which were mostly standardised and live. During MI practice, participants kept their eyes closed. MI training was performed from an internal perspective with a kinaesthetic mode. Changes in MI content, duration and dosage were reported in 31 MI interventions. Familiarisation sessions before the start of the MI intervention were mentioned in 17 reports. MI interventions focused with decreasing relevance on motor-, cognitive- and strength-focused tasks. Average study intervention lasted 34 days, with participants practicing MI on average three times per week for 17 minutes, with 34 MI trials. Average total MI time was 178 minutes including 13 MITS. Reporting rate varied between 25.5% and 95.5%. Conclusions MITS elements of successful interventions were individual, supervised and non-directed sessions, added after physical practice. Successful design characteristics were dominant in the Psychology literature, in interventions focusing on motor and strength-related tasks, in interventions with participants aged 20 to 29 years old, and in MI interventions including participants of both genders. Systematic searching of the MI literature was constrained by the lack of a defined MeSH term.

Towards the integration of mental practice in rehabilitation programs. A critical review

Francine Malouin,  Philip Jackson,  Carol Richards (2013)
Many clinical studies have investigated the use of mental practice (MP) through motor imagery (MI) to enhance functional recovery of patients with diverse physical disabilities. Although beneficial effects have been generally reported for training motor functions in persons with chronic stroke (e.g., reaching, writing, walking), attempts to integrate MP within rehabilitation programs have been met with mitigated results. These findings have stirred further questioning about the value of MP in neurological rehabilitation. In fact, despite abundant systematic reviews, which customarily focused on the methodological merits of selected studies, several questions about factors underlying observed effects remain to be addressed. This review discusses these issues in an attempt to identify factors likely to hamper the integration of MP within rehabilitation programs. First, the rationale underlying the use of MP for training motor function is briefly reviewed. Second, three modes of MI delivery are proposed based on the analysis of the research protocols from 27 studies in persons with stroke and Parkinson's disease. Third, for each mode of MI delivery, a general description of MI training is provided. Fourth, the review discusses factors influencing MI training outcomes such as: the adherence to MI training, the amount of training and the interaction between physical and mental rehearsal; the use of relaxation, the selection of reliable, valid and sensitive outcome measures, the heterogeneity of the patient groups, the selection of patients and the mental rehearsal procedures. To conclude, the review proposes a framework for integrating MP in rehabilitation programs and suggests research targets for steering the implementation of MP in the early stages of the rehabilitation process. The challenge has now shifted towards the demonstration that MI training can enhance the effects of regular therapy in persons with subacute stroke during the period of spontaneous recovery.

This article is distributed under the terms of the Creative Commons Attribution-NonCommercial 4.0 License ( https://creativecommons.org/licenses/by-nc/4.0/) which permits non-commercial use, reproduction and distribution of the work without further permission provided the original work is attributed as specified on the SAGE and Open Access page ( https://us.sagepub.com/en-us/nam/open-access-at-sage).