Prevention of Suicidal Behavior in Prisons : An Overview of Initiatives Based on a Systematic Review of Research on Near-Lethal Suicide Attempts 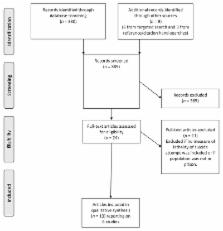 Worldwide, prisoners are at high risk of suicide. Research on near-lethal suicide attempts can provide important insights into risk and protective factors, and inform suicide prevention initiatives in prison.

To synthesize findings of research on near-lethal attempts in prisons, and consider their implications for suicide prevention policies and practice, in the context of other research in custody and other settings.

We searched two bibliographic indexes for studies in any language on near-lethal and severe self-harm in prisoners, supplemented by targeted searches over the period 2000–2014. We extracted information on risk factors descriptively. Data were not meta-analyzed owing to heterogeneity of samples and methods.

We identified eight studies reporting associations between prisoner near-lethal attempts and specific factors. The latter included historical, prison-related, and clinical factors, including psychiatric morbidity and comorbidity, trauma, social isolation, and bullying. These factors were also identified as important in prisoners’ own accounts of what may have contributed to their attempts (presented in four studies).

Factors associated with prisoners’ severe suicide attempts include a range of potentially modifiable clinical, psychosocial, and environmental factors. We make recommendations to address these factors in order to improve detection, management, and prevention of suicide risk in prisoners.

The health and health care of US prisoners: results of a nationwide survey.

Steffie Woolhandler,  J. Boyd,  Danny McCormick … (2009)
We analyzed the prevalence of chronic illnesses, including mental illness, and access to health care among US inmates. We used the 2002 Survey of Inmates in Local Jails and the 2004 Survey of Inmates in State and Federal Correctional Facilities to analyze disease prevalence and clinical measures of access to health care for inmates. Among inmates in federal prisons, state prisons, and local jails, 38.5% (SE = 2.2%), 42.8% (SE = 1.1%), and 38.7% (SE = 0.7%), respectively, suffered a chronic medical condition. Among inmates with a mental condition ever treated with a psychiatric medication, only 25.5% (SE = 7.5%) of federal, 29.6% (SE = 2.8%) of state, and 38.5% (SE = 1.5%) of local jail inmates were taking a psychiatric medication at the time of arrest, whereas 69.1% (SE = 4.8%), 68.6% (SE = 1.9%), and 45.5% (SE = 1.6%) were on a psychiatric medication after admission. Many inmates with a serious chronic physical illness fail to receive care while incarcerated. Among inmates with mental illness, most were off their treatments at the time of arrest. Improvements are needed both in correctional health care and in community mental health services that might prevent crime and incarceration.

The epidemiology and prevention of suicide by hanging: a systematic review.

O Bennewith,  Sue Simkin,  Nav Kapur … (2005)
Hanging is one of the most commonly used methods for suicide worldwide. In England and a number of other countries, its incidence has increased over the last 30 years. This review summarizes the published literature on suicide by hanging. The focus is on its epidemiology in England and on identifying potential means of prevention. We searched Medline (1966-2003), Embase (1980-2003), CINAHL (1982-2003) and PsycINFO (1967-2003). As considerable research on suicides occurring in prisons and psychiatric hospitals in England and Wales has been carried out by the National Confidential Inquiry into Suicide and Homicide (Manchester) and the Prison Service's Safer Custody Group, we obtained additional information from these sources. Only a small proportion (around 10%) of hanging suicides occur in the controlled environments of hospitals, prisons, and police custody; the remainder occur in the community. The most commonly used ligatures (rope, belts, flex) and ligature points (beams, banisters, hooks, door knobs, and trees) are widely available; thus prevention strategies focused around restriction of access to means of hanging are of limited value. Around 50% of hanging suicides are not fully suspended--ligature points below head level are commonly used. Case fatality following attempted suicide by hanging is around 70%; the majority (80-90%) of those who reach hospital alive survive. Strategies to reduce suicide by hanging should focus on the prevention of suicide in controlled environments, the emergency management of 'near-hanging' and on the primary prevention of suicide in general. More research is required to better understand the recent rise in popularity of this method.

Seena Fazel,  Martin Grann,  Boo Kling … (2011)
Although suicide rates among prisoners are high and vary between countries, it is uncertain whether this reflects the importation of risk from the general population or is associated with incarceration rates.

Distributed as a Hogrefe OpenMind article under the license CC BY 4.0 ( http://creativecommons.org/licenses/by/4.0/)