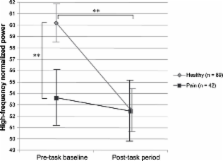 Studies in adults have demonstrated a relationship between lowered heart rate variability (HRV) and poor health. However, less is known about the role of autonomic arousal in children’s well-being. The aim of the current study was to examine resting HRV in children with chronic pain compared to healthy control children and, further, to examine children’s HRV following a series of acute experimental pain tasks in both groups. Participants included 104 healthy control children and 48 children with chronic pain aged 8–17 years. The laboratory session involved a 5-minute baseline electrocardiogram followed by four pain induction tasks: evoked pressure, cold pressor, focal pressure, and a conditioned pain modulation task. After the tasks were complete, a 5-minute post-task electrocardiogram recording was taken. Spectral analysis was used to capture high-frequency normalized power and the ratio of low-to-high frequency band power, signifying cardiac vagal tone and sympathetic balance, respectively. Results revealed that children with chronic pain had significantly lower resting HRV (signified by low high-frequency normalized power and high ratio of low-to-high frequency band power) compared to healthy children; moreover, a significant interaction between groups and time revealed that children with chronic pain displayed a static HRV response to the pain session compared to healthy children, whose HRV was reduced concomitant with the pain session. These findings suggest that children with chronic pain may have a sustained stress response with minimal variability in response to new acute pain stressors.

The many metrics of cardiac chronotropy: a pragmatic primer and a brief comparison of metrics.

S Chambers,  Jeffrey Towers,  Peter J. Allen (2007)
This paper focuses on pragmatic issues in obtaining measures of cardiac vagal control, and overviews a set of freely available software tools for obtaining several widely used metrics that putatively reflect sympathetic and/or parasympathetic contributions to cardiac chronotropy. After an overview of those metrics, and a discussion of potential confounds and extraneous influences, an empirical examination of the relationships amongst these metrics is provided. This study examined 10 metrics in 96 unselected college students under conditions of resting baseline and serial paced arithmetic. Intercorrelations between metrics were very high. Factor analyses were conducted on the metrics reflecting variability in cardiac rate, once at baseline and again during mental arithmetic. Factor structure was highly stable across tasks, and included a factor that had high loadings of all variables except Toichi's "cardiac sympathetic index" (CSI), and a second factor that was defined predominantly by the CSI. Although generally highly correlated, the various metrics responded differently under challenge.

Heart rate variability and its relation to prefrontal cognitive function: the effects of training and detraining.

Nichole Hansen,  J J Sollers,  Kjetil Stenvik … (2004)
The aim of the present study was to investigate the relationship between physical fitness, heart rate variability (HRV) and cognitive function in 37 male sailors from the Royal Norwegian Navy. All subjects participated in an 8-week training program, after which the subjects completed the initial cognitive testing (pretest). The subjects were assigned into a detrained group (DG) and a trained group (TG) based on their application for further duty. The DG withdrew from the training program for 4 weeks after which all subjects then completed the cognitive testing again (post-test). Physical fitness, measured as maximum oxygen consumption (VO2(max)), resting HRV, and cognitive function, measured using a continuous performance task (CPT) and a working memory test (WMT), were recorded during the pre-test and the post-test, and the data presented as the means and standard deviations. The results showed no between-group differences in VO2(max) or HRV at the pre-test. The DG showed a significant decrease in VO2(max) from the pre- to the post-test and a lower resting HRV than the TG on the post-test. Whereas there were no between-group differences on the CPT or WMT at the pre-test, the TG had faster reaction times and more true positive responses on tests of executive function at the post-test compared to the pre-test. The DG showed faster reaction times on non-executive tasks at the post-test compared to the pre-test. The results are discussed within a neurovisceral integration framework linking parasympathetic outflow to the heart to prefrontal neural functions.

S Porges (1994)
Cardiac vagal tone is proposed as a novel index of stress and stress vulnerability in mammals. A model is described that emphasizes the role of the parasympathetic nervous system and particularly the vagus nerve in defining stress. The model details the importance of a branch of the vagus originating in the nucleus ambiguus. In mammals the nucleus ambiguus not only coordinates sucking, swallowing, and breathing, but it also regulates heart rate and vocalizations in response to stressors. In mammals it is possible, by quantifying the amplitude of respiratory sinus arrhythmia, to assess the tonic and phasic regulation of the vagal pathways originating in the nucleus ambiguus. Measurement of this component of vagal tone is proposed as a method to assess, on an individual basis, both stress and the vulnerability to stress.