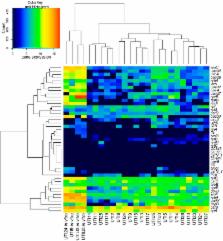 mRNA profiling of pathogens during the course of human infections gives detailed information on the expression levels of relevant genes that drive pathogenicity and adaptation and at the same time allows for the delineation of phylogenetic relatedness of pathogens that cause specific diseases. In this study, we used mRNA sequencing to acquire information on the expression of Escherichia coli pathogenicity genes during urinary tract infections (UTI) in humans and to assign the UTI-associated E. coli isolates to different phylogenetic groups. Whereas the in vivo gene expression profiles of the majority of genes were conserved among 21 E. coli strains in the urine of elderly patients suffering from an acute UTI, the specific gene expression profiles of the flexible genomes was diverse and reflected phylogenetic relationships. Furthermore, genes transcribed in vivo relative to laboratory media included well-described virulence factors, small regulatory RNAs, as well as genes not previously linked to bacterial virulence. Knowledge on relevant transcriptional responses that drive pathogenicity and adaptation of isolates to the human host might lead to the introduction of a virulence typing strategy into clinical microbiology, potentially facilitating management and prevention of the disease.

Urinary tract infections (UTI) are very common; at least half of all women experience UTI, most of which are caused by pathogenic Escherichia coli strains. In this study, we applied massive parallel cDNA sequencing (RNA-seq) to provide unbiased, deep, and accurate insight into the nature and the dimension of the uropathogenic E. coli gene expression profile during an acute UTI within the human host. This work was undertaken to identify key players in physiological adaptation processes and, hence, potential targets for new infection prevention and therapy interventions specifically aimed at sabotaging bacterial adaptation to the human host.

Sarah Waters,  Gisela Storz (2009)
Bacteria possess numerous and diverse means of gene regulation using RNA molecules, including mRNA leaders that affect expression in cis, small RNAs that bind to proteins or base pair with target RNAs, and CRISPR RNAs that inhibit the uptake of foreign DNA. Although examples of RNA regulators have been known for decades in bacteria, we are only now coming to a full appreciation of their importance and prevalence. Here, we review the known mechanisms and roles of regulatory RNAs, highlight emerging themes, and discuss remaining questions.

Gisela Storz,  Jörg Vogel,  Karen M. Wassarman (2011)
Research on the discovery and characterization of small, regulatory RNAs in bacteria has exploded in recent years. These sRNAs act by base pairing with target mRNAs with which they share limited or extended complementarity, or by modulating protein activity, in some cases by mimicking other nucleic acids. Mechanistic insights into how sRNAs bind mRNAs and proteins, how they compete with each other, and how they interface with ribonucleases are active areas of discovery. Current work also has begun to illuminate how sRNAs modulate expression of distinct regulons and key transcription factors, thus integrating sRNA activity into extensive regulatory networks. In addition, the application of RNA deep sequencing has led to reports of hundreds of additional sRNA candidates in a wide swath of bacterial species. Most importantly, recent studies have served to clarify the abundance of remaining questions about how, when, and why sRNA-mediated regulation is of such importance to bacterial lifestyles. Copyright © 2011 Elsevier Inc. All rights reserved.

P.B. and U.M. contributed equally to this work.