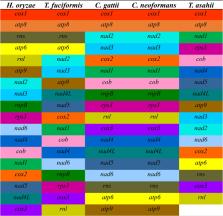 In this study, the mitogenome of Hannaella oryzae was sequenced by next-generation sequencing (NGS) and successfully assembled. The H. oryzae mitogenome comprised circular DNA molecules with a total size of 26,444 bp. We found that the mitogenome of H. oryzae partially deleted the tRNA gene transferring cysteine. Comparative mitogenomic analyses showed that intronic regions were the main factors contributing to the size variations of mitogenomes in Tremellales. Introns of the cox1 gene in Tremellales species were found to have undergone intron loss/gain events, and introns of the H. oryzae cox1 gene may have different origins. Gene arrangement analysis revealed that H. oryzae contained a unique gene order different from other Tremellales species. Phylogenetic analysis based on a combined mitochondrial gene set resulted in identical and well-supported topologies, wherein H. oryzae was closely related to Tremella fuciformis. This study represents the first report of mitogenome for the Hannaella genus, which will allow further study of the population genetics, taxonomy, and evolutionary biology of this important phylloplane yeast and other related species.

Matthias Bernt,  Alexander Donath,  Frank Jühling … (2013)
About 2000 completely sequenced mitochondrial genomes are available from the NCBI RefSeq data base together with manually curated annotations of their protein-coding genes, rRNAs, and tRNAs. This annotation information, which has accumulated over two decades, has been obtained with a diverse set of computational tools and annotation strategies. Despite all efforts of manual curation it is still plagued by misassignments of reading directions, erroneous gene names, and missing as well as false positive annotations in particular for the RNA genes. Taken together, this causes substantial problems for fully automatic pipelines that aim to use these data comprehensively for studies of animal phylogenetics and the molecular evolution of mitogenomes. The MITOS pipeline is designed to compute a consistent de novo annotation of the mitogenomic sequences. We show that the results of MITOS match RefSeq and MitoZoa in terms of annotation coverage and quality. At the same time we avoid biases, inconsistencies of nomenclature, and typos originating from manual curation strategies. The MITOS pipeline is accessible online at http://mitos.bioinf.uni-leipzig.de. Copyright © 2012 Elsevier Inc. All rights reserved.