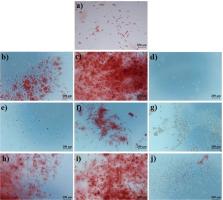 Zoledronic acid (ZOL) is a third generation bisphosphonate which can be used as a drug for the treatment of osteoporosis and metastasis. In this study, graphene oxide (GO) is conjugated with ZOL, and the nanostructured material is evaluated in terms viability, proliferation and differentiation. Furthermore, the associated morphological changes of bone marrow-derived mesenchymal stem cells (BM-MSC), and Michigan Cancer Foundation-7 (MCF-7) breast cancer cells, as well as the effect of the drugs on mineralization of BM-MSCs are investigated using a variety of characterization techniques including Fourier Transform Infrared Spectroscopy (FTIR), scanning electron microscopy (SEM) as well as alamar blue, acridine orange, and alizarin red assays. Nanostructured ZOL-GO with an optimum performance is synthesized using ZOL and GO suspensions with the concentration of 50 µM and 2.91 ng/ml, respectively. ZOL-GO nanostructures can facilitate the mineralization of BM-MSC cells, demonstrated by the formation of clusters around the cells. The results obtained confirm the performance of ZOL-GO nanostructures as promising drug complexes for the treatment of osteoporosis and metastasis.

Sofia Villar,  Diana I Paredes,  J Tascón … (2008)
The dispersion behavior of graphene oxide in different organic solvents has been investigated. As-prepared graphite oxide could be dispersed in N, N-dimethylformamide, N-methyl-2-pyrrolidone, tetrahydrofuran, and ethylene glycol. In all of these solvents, full exfoliation of the graphite oxide material into individual, single-layer graphene oxide sheets was achieved by sonication. The graphene oxide dispersions exhibited long-term stability and were made of sheets between a few hundred nanometers and a few micrometers large, similar to the case of graphene oxide dispersions in water. These results should facilitate the manipulation and processing of graphene-based materials for different applications.

Structural evolution during the reduction of chemically derived graphene oxide.

Vivek Shenoy,  Manish Chhowalla,  Cecilia Mattevi … (2010)
The excellent electrical, optical and mechanical properties of graphene have driven the search to find methods for its large-scale production, but established procedures (such as mechanical exfoliation or chemical vapour deposition) are not ideal for the manufacture of processable graphene sheets. An alternative method is the reduction of graphene oxide, a material that shares the same atomically thin structural framework as graphene, but bears oxygen-containing functional groups. Here we use molecular dynamics simulations to study the atomistic structure of progressively reduced graphene oxide. The chemical changes of oxygen-containing functional groups on the annealing of graphene oxide are elucidated and the simulations reveal the formation of highly stable carbonyl and ether groups that hinder its complete reduction to graphene. The calculations are supported by infrared and X-ray photoelectron spectroscopy measurements. Finally, more effective reduction treatments to improve the reduction of graphene oxide are proposed.

Origin of enhanced stem cell growth and differentiation on graphene and graphene oxide.

Shang-Yu Wang,  Alice W. Lee,  Kian Ping Loh … (2011)
The culture of bone marrow derived mesenchymal stem cells (MSCs), as well as the control of its differentiation toward different tissue lineage, is a very important part of tissue engineering, where cells are combined with artificial scaffold to regenerate tissues. Graphene (G) and graphene oxide (GO) sheets are soft membranes with high in-plane stiffness and can potentially serve as a biocompatible, transferable, and implantable platform for stem cell culture. While the healthy proliferation of stem cells on various carbon platforms has been demonstrated, the chemical role of G and GO, if any, in guiding uncommitted stem cells toward differentiated cells is not known. Herein, we report that the strong noncovalent binding abilities of G allow it to act as a preconcentration platform for osteogenic inducers, which accelerate MSCs growing on it toward the osteogenic lineage. The molecular origin of accelerated differentation is investigated by studying the binding abilities of G and GO toward different growth agents. Interestingly, differentiation to adipocytes is greatly suppressed on G because insulin, which is a key regulator for the synthesis of fatty acids, is denatured upon π-π adsorption on G; in contrast, GO does not interfere with adipogenesis due to electrostatic binding with insulin. The different binding interactions and their subsequent influence on stem cell growth and differentiation are ascribed to different degrees of π-π stacking and electrostatic and hydrogen bonding mediated by G and GO. © 2011 American Chemical Society