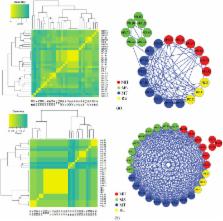 Shilin Chen,  Hui-min Yao,  Jianping Han … (2010)
Background The plant working group of the Consortium for the Barcode of Life recommended the two-locus combination of rbcL + matK as the plant barcode, yet the combination was shown to successfully discriminate among 907 samples from 550 species at the species level with a probability of 72%. The group admits that the two-locus barcode is far from perfect due to the low identification rate, and the search is not over. Methodology/Principal Findings Here, we compared seven candidate DNA barcodes (psbA-trnH, matK, rbcL, rpoC1, ycf5, ITS2, and ITS) from medicinal plant species. Our ranking criteria included PCR amplification efficiency, differential intra- and inter-specific divergences, and the DNA barcoding gap. Our data suggest that the second internal transcribed spacer (ITS2) of nuclear ribosomal DNA represents the most suitable region for DNA barcoding applications. Furthermore, we tested the discrimination ability of ITS2 in more than 6600 plant samples belonging to 4800 species from 753 distinct genera and found that the rate of successful identification with the ITS2 was 92.7% at the species level. Conclusions The ITS2 region can be potentially used as a standard DNA barcode to identify medicinal plants and their closely related species. We also propose that ITS2 can serve as a novel universal barcode for the identification of a broader range of plant taxa.

Comparative analysis of a large dataset indicates that internal transcribed spacer (ITS) should be incorporated into the core barcode for seed plants.

Shi Zhou,  Shi Chen,  Hai-Fei Yan … (2011)
A two-marker combination of plastid rbcL and matK has previously been recommended as the core plant barcode, to be supplemented with additional markers such as plastid trnH-psbA and nuclear ribosomal internal transcribed spacer (ITS). To assess the effectiveness and universality of these barcode markers in seed plants, we sampled 6,286 individuals representing 1,757 species in 141 genera of 75 families (42 orders) by using four different methods of data analysis. These analyses indicate that (i) the three plastid markers showed high levels of universality (87.1-92.7%), whereas ITS performed relatively well (79%) in angiosperms but not so well in gymnosperms; (ii) in taxonomic groups for which direct sequencing of the marker is possible, ITS showed the highest discriminatory power of the four markers, and a combination of ITS and any plastid DNA marker was able to discriminate 69.9-79.1% of species, compared with only 49.7% with rbcL + matK; and (iii) where multiple individuals of a single species were tested, ascriptions based on ITS and plastid DNA barcodes were incongruent in some samples for 45.2% of the sampled genera (for genera with more than one species sampled). This finding highlights the importance of both sampling multiple individuals and using markers with different modes of inheritance. In cases where it is difficult to amplify and directly sequence ITS in its entirety, just using ITS2 is a useful backup because it is easier to amplify and sequence this subset of the marker. We therefore propose that ITS/ITS2 should be incorporated into the core barcode for seed plants.

Kai-Hui Yao,  Jingyuan Song,  Chang Liu … (2010)
Background The internal transcribed spacer 2 (ITS2) region of nuclear ribosomal DNA is regarded as one of the candidate DNA barcodes because it possesses a number of valuable characteristics, such as the availability of conserved regions for designing universal primers, the ease of its amplification, and sufficient variability to distinguish even closely related species. However, a general analysis of its ability to discriminate species in a comprehensive sample set is lacking. Methodology/Principal Findings In the current study, 50,790 plant and 12,221 animal ITS2 sequences downloaded from GenBank were evaluated according to sequence length, GC content, intra- and inter-specific divergence, and efficiency of identification. The results show that the inter-specific divergence of congeneric species in plants and animals was greater than its corresponding intra-specific variations. The success rates for using the ITS2 region to identify dicotyledons, monocotyledons, gymnosperms, ferns, mosses, and animals were 76.1%, 74.2%, 67.1%, 88.1%, 77.4%, and 91.7% at the species level, respectively. The ITS2 region unveiled a different ability to identify closely related species within different families and genera. The secondary structure of the ITS2 region could provide useful information for species identification and could be considered as a molecular morphological characteristic. Conclusions/Significance As one of the most popular phylogenetic markers for eukaryota, we propose that the ITS2 locus should be used as a universal DNA barcode for identifying plant species and as a complementary locus for CO1 to identify animal species. We have also developed a web application to facilitate ITS2-based cross-kingdom species identification (http://its2-plantidit.dnsalias.org).