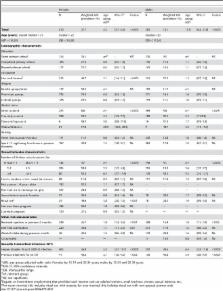 From a demographic surveillance system, we selected a random sample of residents aged 13-34 years, who were contacted at home and invited to a nearby mobile study site. Consent procedures for non-emancipated minors required assent and parental consent. From October 2003 - April 2004, consenting participants were interviewed on risk behavior and tested for HIV and HSV-2. HIV voluntary counseling and testing was offered.

Ian Maclean,  Stephen Moses,  Alicia Parker … (2007)
Male circumcision could provide substantial protection against acquisition of HIV-1 infection. Our aim was to determine whether male circumcision had a protective effect against HIV infection, and to assess safety and changes in sexual behaviour related to this intervention. We did a randomised controlled trial of 2784 men aged 18-24 years in Kisumu, Kenya. Men were randomly assigned to an intervention group (circumcision; n=1391) or a control group (delayed circumcision, 1393), and assessed by HIV testing, medical examinations, and behavioural interviews during follow-ups at 1, 3, 6, 12, 18, and 24 months. HIV seroincidence was estimated in an intention-to-treat analysis. This trial is registered with ClinicalTrials.gov, with the number NCT00059371. The trial was stopped early on December 12, 2006, after a third interim analysis reviewed by the data and safety monitoring board. The median length of follow-up was 24 months. Follow-up for HIV status was incomplete for 240 (8.6%) participants. 22 men in the intervention group and 47 in the control group had tested positive for HIV when the study was stopped. The 2-year HIV incidence was 2.1% (95% CI 1.2-3.0) in the circumcision group and 4.2% (3.0-5.4) in the control group (p=0.0065); the relative risk of HIV infection in circumcised men was 0.47 (0.28-0.78), which corresponds to a reduction in the risk of acquiring an HIV infection of 53% (22-72). Adjusting for non-adherence to treatment and excluding four men found to be seropositive at enrollment, the protective effect of circumcision was 60% (32-77). Adverse events related to the intervention (21 events in 1.5% of those circumcised) resolved quickly. No behavioural risk compensation after circumcision was observed. Male circumcision significantly reduces the risk of HIV acquisition in young men in Africa. Where appropriate, voluntary, safe, and affordable circumcision services should be integrated with other HIV preventive interventions and provided as expeditiously as possible.

Male circumcision for HIV prevention in men in Rakai, Uganda: a randomised trial.

Ronald Gray,  Godfrey Kigozi,  David Serwadda … (2007)
Ecological and observational studies suggest that male circumcision reduces the risk of HIV acquisition in men. Our aim was to investigate the effect of male circumcision on HIV incidence in men. 4996 uncircumcised, HIV-negative men aged 15-49 years who agreed to HIV testing and counselling were enrolled in this randomised trial in rural Rakai district, Uganda. Men were randomly assigned to receive immediate circumcision (n=2474) or circumcision delayed for 24 months (2522). HIV testing, physical examination, and interviews were repeated at 6, 12, and 24 month follow-up visits. The primary outcome was HIV incidence. Analyses were done on a modified intention-to-treat basis. This trial is registered with ClinicalTrials.gov, with the number NCT00425984. Baseline characteristics of the men in the intervention and control groups were much the same at enrollment. Retention rates were much the same in the two groups, with 90-92% of participants retained at all time points. In the modified intention-to-treat analysis, HIV incidence over 24 months was 0.66 cases per 100 person-years in the intervention group and 1.33 cases per 100 person-years in the control group (estimated efficacy of intervention 51%, 95% CI 16-72; p=0.006). The as-treated efficacy was 55% (95% CI 22-75; p=0.002); efficacy from the Kaplan-Meier time-to-HIV-detection as-treated analysis was 60% (30-77; p=0.003). HIV incidence was lower in the intervention group than it was in the control group in all sociodemographic, behavioural, and sexually transmitted disease symptom subgroups. Moderate or severe adverse events occurred in 84 (3.6%) circumcisions; all resolved with treatment. Behaviours were much the same in both groups during follow-up. Male circumcision reduced HIV incidence in men without behavioural disinhibition. Circumcision can be recommended for HIV prevention in men.

T VanCott,  ,  Xiaohui Li … (2001)
The probability of HIV-1 transmission per coital act in representative African populations is unknown. We aimed to calculate this probability overall, and to estimate how it is affected by various factors thought to influence infectivity. 174 monogamous couples, in which one partner was HIV-1 positive, were retrospectively identified from a population cohort in Rakai, Uganda. Frequency of intercourse and reliability of reporting within couples was assessed prospectively. HIV-1 seroconversion was determined in the uninfected partners, and HIV-1 viral load was measured in the infected partners. Adjusted rate ratios of transmission per coital act were estimated by Poisson regression. Probabilities of transmission per act were estimated by log-log binomial regression for quartiles of age and HIV-1 viral load, and for symptoms or diagnoses of sexually transmitted diseases (STDs) in the HIV-1-infected partners. The mean frequency of intercourse was 8.9 per month, which declined with age and HIV-1 viral load. Members of couples reported similar frequencies of intercourse. The overall unadjusted probability of HIV-1 transmission per coital act was 0.0011 (95% CI 0.0008-0.0015). Transmission probabilities increased from 0.0001 per act at viral loads of less than 1700 copies/mL to 0.0023 per act at 38 500 copies/mL or more (p=0.002), and were 0.0041 with genital ulceration versus 0.0011 without (p=0.02). Transmission probabilities per act did not differ significantly by HIV-1 subtypes A and D, sex, STDs, or symptoms of discharge or dysuria in the HIV-1-positive partner. Higher viral load and genital ulceration are the main determinants of HIV-1 transmission per coital act in this Ugandan population.

Publisher ID: 09-PONE-RA-09809R1
DOI: 10.1371/journal.pone.0006470
PMC ID: 2714463
PubMed ID: 19649242
Copyright statement: This is an open-access article distributed under the terms of the Creative Commons Public Domain declaration which stipulates that, once placed in the public domain, this work may be freely reproduced, distributed, transmitted, modified, built upon, or otherwise used by anyone for any lawful purpose.