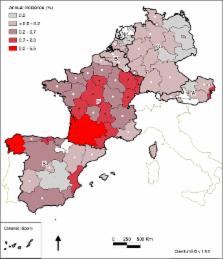 The incidence of canine babesiosis may vary considerably from one country to another depending on the distribution of the causative parasite species and their specific vectors. The aim of the present study was to evaluate the clinical occurrence of canine babesiosis diagnosed in European veterinary clinics and propose an updated map of the disease distribution in Western Europe. Questionnaires were sent to companion animal veterinary clinics in Spain, France, Benelux, Germany and Austria. The annual number of babesiosis cases in 2010, the number of practitioners in the clinic and the location of the clinic were recorded. The total numbers of dogs and practitioners in each country were used for definition of the reference populations and the annual incidence of canine babesiosis was calculated by dividing the total number of reported babesiosis cases by the total number of dogs in the veterinary practices involved in the study. Data were georeferenced for distribution map construction. The overall annual incidence of clinical babesiosis amongst the investigated dog population was 0.7%, with significant variations amongst countries and regions. Three epidemiological situations were described: (i) Spain, with co-existence of several species of piroplasms and patchy distribution of babesiosis, (ii) France, with overall presence of babesiosis due to Babesia canis and local variations and (iii) Benelux, Germany and Austria, with overall low prevalence of the disease associated with localised description related either to imported cases or to small autochthonous foci of B. canis infection.

M J Homer,  I Aguilar-Delfin,  S Telford … (2000)
Babesiosis is an emerging, tick-transmitted, zoonotic disease caused by hematotropic parasites of the genus Babesia. Babesial parasites (and those of the closely related genus Theileria) are some of the most ubiquitous and widespread blood parasites in the world, second only to the trypanosomes, and consequently have considerable worldwide economic, medical, and veterinary impact. The parasites are intraerythrocytic and are commonly called piroplasms due to the pear-shaped forms found within infected red blood cells. The piroplasms are transmitted by ixodid ticks and are capable of infecting a wide variety of vertebrate hosts which are competent in maintaining the transmission cycle. Studies involving animal hosts other than humans have contributed significantly to our understanding of the disease process, including possible pathogenic mechanisms of the parasite and immunological responses of the host. To date, there are several species of Babesia that can infect humans, Babesia microti being the most prevalent. Infections with Babesia species generally follow regional distributions; cases in the United States are caused primarily by B. microti, whereas cases in Europe are usually caused by Babesia divergens. The spectrum of disease manifestation is broad, ranging from a silent infection to a fulminant, malaria-like disease, resulting in severe hemolysis and occasionally in death. Recent advances have resulted in the development of several diagnostic tests which have increased the level of sensitivity in detection, thereby facilitating diagnosis, expediting appropriate patient management, and resulting in a more accurate epidemiological description.

Canine babesiosis in Europe: how many diseases?

Vesna Matijatko,  Marin Torti,  Theo Schetters (2012)
Babesiosis, recognized since ancient times as an important disease of livestock and more recently as an emerging disease in dogs worldwide, is caused by intraerythrocytic protozoa of the genus Babesia and is transmitted by ticks. The pathophysiology of canine babesiosis has been extensively studied but many questions remain unanswered, especially regarding the diversity of disease manifestations in different European countries. Continued investigation of the similarities and differences in host-parasite interplay in canine babesiosis in different European countries should lead to a better understanding of the disease process, potentially leading to better prediction of disease outcome and the development of new treatment modalities. From the European point of view it is important to conduct these studies on Babesia canis. Copyright Â© 2011 Elsevier Ltd. All rights reserved.

Ixodes hexagonus is the main candidate as vector of Theileria annae in northwest Spain.

A.T. Camacho,  E. Pallas,  J.J. Gestal … (2003)
Babesia canis and Babesia gibsoni have, until recently, been considered the only piroplasms that parasitise dogs. However, recent reports indicate that "small" Babesia infections in Spanish dogs are surprisingly frequent and molecular phylogenetic analysis indicates that the infecting agent is closely related to Babesia microti. Because the 18SrDNA sequence was not completely identical to that of B. microti, the new name "Theileria annae" was assigned to the canine agent. No information is available regarding the possible vector of the new piroplasm, T. annae. As part of an effort to identify the tick that may transmit T. annae in northwest Spain we asked veterinary surgeons practising in the region to collect and send to our laboratory ticks from dogs visiting their clinics. Seven hundred and twenty ticks collected from dogs of unknown clinical status during 1998 and 636 ticks collected between November 2001 and March 2002 from 38 dogs infected with T. annae and 131 uninfected dogs were identified. Results from the first study indicated that among the Ixodidae, Ixodes hexagonus clearly predominates over Ixodes ricinus (26.11% versus 6.67%). This observation was consistent with results of the second study, in which I. hexagonus was detected in all infected dogs and 71.8% of non-infected dogs and I. ricinus was not detected in either the infected or non-infected dogs. Results from the 2001-2002 study also indicate that the presence of Dermacentor reticulatus adult females is significantly less frequent among infected than non-infected dogs (OR=0.44; 95% CI: 0.21-0.92). On the other hand, I. hexagonus adult females and males are 6.75 and 4.24 times more likely to be detected among infected than non-infected dogs, respectively, with the association being, in both cases, statistically significant (95% CI: 1.97-23.12 and 1.92-9.36, respectively). I. hexagonus emerges as the main candidate as vector of T. annae because it feeds on dogs more frequently than other ticks and because B. microti is transmitted by Ixodes ticks, both in North America and Europe. In the absence of definitive confirmation of this hypothesis, our observations suggest that I. hexagonus might serve the same role as does Ixodes scapularis (=Ixodes dammini), the vector of B. microti in eastern North America.