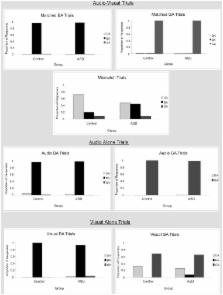 Autism Spectrum Disorder (ASD) is a pervasive developmental disorder including abnormalities in perceptual processing. We measure perception in a battery of tests across speech (filtering, phoneme categorization, multisensory integration) and music (pitch memory, meter categorization, harmonic priming). We found that compared to controls, the ASD group showed poorer filtering, less audio-visual integration, less specialization for native phonemic and metrical categories, and a higher instance of absolute pitch. No group differences were found in harmonic priming. Our results are discussed in a developmental framework where culture-specific knowledge acquired early compared to late in development is most impaired, perhaps because of early-accelerated brain growth in ASD. These results suggest that early auditory remediation is needed for good communication and social functioning.

Cortical activation and synchronization during sentence comprehension in high-functioning autism: evidence of underconnectivity.

Nancy J. Minshew,  Vladimir L. Cherkassky,  Evan Keller … (2004)
The brain activation of a group of high-functioning autistic participants was measured using functional MRI during sentence comprehension and the results compared with those of a Verbal IQ-matched control group. The groups differed in the distribution of activation in two of the key language areas. The autism group produced reliably more activation than the control group in Wernicke's (left laterosuperior temporal) area and reliably less activation than the control group in Broca's (left inferior frontal gyrus) area. Furthermore, the functional connectivity, i.e. the degree of synchronization or correlation of the time series of the activation, between the various participating cortical areas was consistently lower for the autistic than the control participants. These findings suggest that the neural basis of disordered language in autism entails a lower degree of information integration and synchronization across the large-scale cortical network for language processing. The article presents a theoretical account of the findings, related to neurobiological foundations of underconnectivity in autism.

Why the frontal cortex in autism might be talking only to itself: local over-connectivity but long-distance disconnection.

Karen Pierce,  Eric Courchesne (2005)
Although it has long been thought that frontal lobe abnormality must play an important part in generating the severe impairment in higher-order social, emotional and cognitive functions in autism, only recently have studies identified developmentally early frontal lobe defects. At the microscopic level, neuroinflammatory reactions involving glial activation, migration defects and excess cerebral neurogenesis and/or defective apoptosis might generate frontal neural pathology early in development. It is hypothesized that these abnormal processes cause malformation and thus malfunction of frontal minicolumn microcircuitry. It is suggested that connectivity within frontal lobe is excessive, disorganized and inadequately selective, whereas connectivity between frontal cortex and other systems is poorly synchronized, weakly responsive and information impoverished. Increased local but reduced long-distance cortical-cortical reciprocal activity and coupling would impair the fundamental frontal function of integrating information from widespread and diverse systems and providing complex context-rich feedback, guidance and control to lower-level systems.

R Courchesne,  S Pizzo,  R Ziccardi … (2001)
To quantify developmental abnormalities in cerebral and cerebellar volume in autism. The authors studied 60 autistic and 52 normal boys (age, 2 to 16 years) using MRI. Thirty autistic boys were diagnosed and scanned when 5 years or older. The other 30 were scanned when 2 through 4 years of age and then diagnosed with autism at least 2.5 years later, at an age when the diagnosis of autism is more reliable. Neonatal head circumferences from clinical records were available for 14 of 15 autistic 2- to 5-year-olds and, on average, were normal (35.1 +/- 1.3 cm versus clinical norms: 34.6 +/- 1.6 cm), indicative of normal overall brain volume at birth; one measure was above the 95th percentile. By ages 2 to 4 years, 90% of autistic boys had a brain volume larger than normal average, and 37% met criteria for developmental macrencephaly. Autistic 2- to 3-year-olds had more cerebral (18%) and cerebellar (39%) white matter, and more cerebral cortical gray matter (12%) than normal, whereas older autistic children and adolescents did not have such enlarged gray and white matter volumes. In the cerebellum, autistic boys had less gray matter, smaller ratio of gray to white matter, and smaller vermis lobules VI-VII than normal controls. Abnormal regulation of brain growth in autism results in early overgrowth followed by abnormally slowed growth. Hyperplasia was present in cerebral gray matter and cerebral and cerebellar white matter in early life in patients with autism.