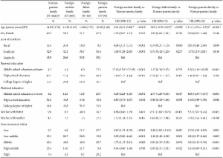 These results indicate that adolescents whose fathers were not born in Korea and whose fathers and mothers were both born outside Korea are at greater risk for cigarette and drug use and risky sexual behaviors. For these high risk groups, health education should include dependency prevention program, safety issue, and health screening as well as programs aimed at preventing substance use and sexual activity.

Gwi- Bae,  Un Seok Lee,  Woon Ik Park … (2007)
The objective was to estimate the prevalence and correlates of psychiatric disorders in a nationwide sample of Korean adults. Face-to-face interviews were conducted with the Korean version of Composite International Diagnostic Interview 2.1/DSM-IV (N = 6275, response rate 79.8%). The lifetime and 12-month prevalences for all types of DSM-IV disorders were 33.5% and 20.6%, respectively. Those of specific disorders were as follows: 17.2% and 7.1% for alcohol use disorder, 11.2% and 7.4% for nicotine use disorder, 5.2% and 4.2% for specific phobia, 4.3% and 1.7% for major depressive disorder, and 2.3% and 1.0% for generalized anxiety disorder. Among the sociodemographic variables, widowed status, higher income, and rural residence were the risk factors for both lifetime major depressive disorder and alcohol use disorder after controlling for gender, age, and education. The prevalence of psychiatric disorders was higher than those observed in other East-Asian countries and most European countries, but lower than that in the United States. Alcohol use disorder was particularly high in Korea.

Immigration and lifetime prevalence of DSM-IV psychiatric disorders among Mexican Americans and non-Hispanic whites in the United States: results from the National Epidemiologic Survey on Alcohol and Related Conditions.

The risks for late adolescence of early adolescent marijuana use.