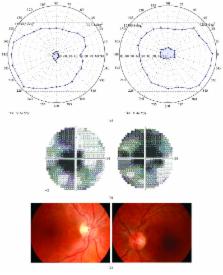 Twenty-two eyes of eleven consecutive LHON male patients with confirmed mitochondrial 11778G>A DNA mutation were prospectively examined with the V4e stimulus of SKP in both eyes. The mean time after the onset of LHON was one year. The area of obtained isopters was measured in square degrees (deg 2). Additionally, static automated perimetry (SAP) within 30° was performed.

Visual acuity ranged from counting fingers to 50 cm to 0.4. VFs obtained with SKP showed central scotomas in 18 eyes (82%); the periphery of the VF in these eyes remained intact. The mean area of central scotoma was 408.8 deg 2, and the mean area of the peripheral VF was 12291.1 deg 2; SAP also revealed central scotoma in these patients. In four eyes (18%) with the worst visual acuity, only the residual central island of VF was found using SKP (mean area 898.4 deg 2). SAP was difficult to obtain in these patients.

SKP provides additional clinical information in regard to the visual function of LHON patients. SKP enables the quantification of the area of central scotoma, preserved peripheral VF, and residual central island of vision. Using V4 stimulus is especially useful in LHON patients with poor visual acuity, when SAP is difficult to obtain.

The epidemiology of Leber hereditary optic neuropathy in the North East of England.

Nicola W. Y. Man,  P Griffiths,  P Chinnery … (2003)
We performed the first population-based clinical and molecular genetic study of Leber hereditary optic neuropathy (LHON) in a population of 2,173,800 individuals in the North East of England. We identified 16 genealogically unrelated families who harbor one of the three primary mitochondrial DNA (mtDNA) mutations that cause LHON. Two of these families were found to be linked genetically to a common maternal founder. A de novo mtDNA mutation (G3460A) was identified in one family. The minimum point prevalence of visual failure due to LHON within this population was 3.22 per 100,000 (95% CI 2.47-3.97 per 100,000), and the minimum point prevalence for mtDNA LHON mutations was 11.82 per 100,000 (95% CI 10.38-13.27 per 100,000). These results indicate that LHON is not rare but has a population prevalence similar to autosomally inherited neurological disorders. The majority of individuals harbored only mutant mtDNA (homoplasmy), but heteroplasmy was detected in approximately 12% of individuals. Overall, however, approximately 33% of families with LHON had at least one heteroplasmic individual. The high incidence of heteroplasmy in pedigrees with LHON raises the possibility that a closely related maternal relative of an index case may not harbor the mtDNA mutation, highlighting the importance of molecular genetic testing for each maternal family member seeking advice about their risks of visual failure.

P Yu-Wai-Man,  P G Griffiths,  William Hudson … (2008)
Leber hereditary optic neuropathy (LHON) and autosomal dominant optic atrophy (DOA) are the two most common inherited optic neuropathies and they result in significant visual morbidity among young adults. Both disorders are the result of mitochondrial dysfunction: LHON from primary mitochondrial DNA (mtDNA) mutations affecting the respiratory chain complexes; and the majority of DOA families have mutations in the OPA1 gene, which codes for an inner mitochondrial membrane protein critical for mtDNA maintenance and oxidative phosphorylation. Additional genetic and environmental factors modulate the penetrance of LHON, and the same is likely to be the case for DOA which has a markedly variable clinical phenotype. The selective vulnerability of retinal ganglion cells (RGCs) is a key pathological feature and understanding the fundamental mechanisms that underlie RGC loss in these disorders is a prerequisite for the development of effective therapeutic strategies which are currently limited.

Adam Walker,  Valerio Carelli,  Alfredo Sadun … (1999)
Leber's hereditary optic neuropathy (LHON), though known to be due to 1 of 3 pathogenic mtDNA point mutations (nucleotide positions 11,778, 3460, and 14,484), usually manifests itself acutely in young adulthood with a stereotypical presentation of dyschromatopsia, loss of central vision, and loss of the papillomacular bundle nerve fiber layer. Histopathologic investigations have demonstrated devastating losses of axons with relative sparing of the most peripherally placed fibers in the optic nerves. This study was designed to morphometrically investigate the nerve fiber spectrum from ultrastructural studies of optic nerves obtained from 2 patients with LHON. Two cases of LHON were molecularly characterized and the optic nerves from these cases studied by light microscopy and electron microscopy. Montages were made of electron micrographs cut orthogonal to fibers obtained from the periphery of each optic nerve, and these were then used for the measurement of each axon (short and long axis) and its myelin sheath. From this, a spectrum of nerve fiber layer was generated, yielding axon caliber profiles that could be compared between optic nerves. The total depletion of optic nerve fiber population in the 2 cases of LHON varied from 95% to 99%. Those fibers that were spared were limited to the peripheral optic nerve. The nerve fiber layer spectra of these remaining fibers showed a marked diminution of the first peak of axons of less than 1 micron in diameter, with relative emphasis of a second peak of axons of about 2 microns in diameter. In comparison to normal controls, this reflected a preferential loss of the smallest axons corresponding to the P-cell population. The clinical features of dyschromatopsia and central scotoma (with preservation of pupils) in LHON suggests the selective loss of the P-cell population known to subserve these (and not pupil) functions. This also correlates well with the fundus findings of early losses of the papillomacular bundle. The present study extends these findings to demonstrate a relative preservation of the M-cells in the optic nerve as reflected by the nerve fiber spectral profile. This selective loss of smaller fibers and their corresponding smaller retinal ganglion cells may, in addition to explaining the clinical features in LHON, provide valuable insights as to the exact pathophysiologic mechanisms by which mitochondrial impairment may induce apoptosis in vulnerable neurons.