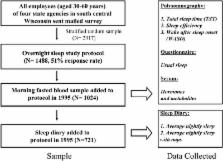 Sleep duration may be an important regulator of body weight and metabolism. An association between short habitual sleep time and increased body mass index (BMI) has been reported in large population samples. The potential role of metabolic hormones in this association is unknown.

A U-shaped curvilinear association between sleep duration and BMI was observed. In persons sleeping less than 8 h (74.4% of the sample), increased BMI was proportional to decreased sleep. Short sleep was associated with low leptin ( p for slope = 0.01), with a predicted 15.5% lower leptin for habitual sleep of 5 h versus 8 h, and high ghrelin ( p for slope = 0.008), with a predicted 14.9% higher ghrelin for nocturnal (polysomnographic) sleep of 5 h versus 8 h, independent of BMI.

Participants with short sleep had reduced leptin and elevated ghrelin. These differences in leptin and ghrelin are likely to increase appetite, possibly explaining the increased BMI observed with short sleep duration. In Western societies, where chronic sleep restriction is common and food is widely available, changes in appetite regulatory hormones with sleep curtailment may contribute to obesity.

The less people sleep the higher their risk for being overweight. This study shows that sleep duration affects appetite-regulating hormones

The occurrence of sleep-disordered breathing among middle-aged adults.

John Seeley,  Derek S. Woods,  D Baskin … (2000)
New information regarding neuronal circuits that control food intake and their hormonal regulation has extended our understanding of energy homeostasis, the process whereby energy intake is matched to energy expenditure over time. The profound obesity that results in rodents (and in the rare human case as well) from mutation of key signalling molecules involved in this regulatory system highlights its importance to human health. Although each new signalling pathway discovered in the hypothalamus is a potential target for drug development in the treatment of obesity, the growing number of such signalling molecules indicates that food intake is controlled by a highly complex process. To better understand how energy homeostasis can be achieved, we describe a model that delineates the roles of individual hormonal and neuropeptide signalling pathways in the control of food intake and the means by which obesity can arise from inherited or acquired defects in their function.

Impact of sleep debt on metabolic and endocrine function.

Esther van der Meer,  Erin Spiegel,  R Leproult … (1999)
Chronic sleep debt is becoming increasingly common and affects millions of people in more-developed countries. Sleep debt is currently believed to have no adverse effect on health. We investigated the effect of sleep debt on metabolic and endocrine functions. We assessed carbohydrate metabolism, thyrotropic function, activity of the hypothalamo-pituitary-adrenal axis, and sympathovagal balance in 11 young men after time in bed had been restricted to 4 h per night for 6 nights. We compared the sleep-debt condition with measurements taken at the end of a sleep-recovery period when participants were allowed 12 h in bed per night for 6 nights. Glucose tolerance was lower in the sleep-debt condition than in the fully rested condition (p<0.02), as were thyrotropin concentrations (p<0.01). Evening cortisol concentrations were raised (p=0.0001) and activity of the sympathetic nervous system was increased in the sleep-debt condition (p<0.02). Sleep debt has a harmful impact on carbohydrate metabolism and endocrine function. The effects are similar to those seen in normal ageing and, therefore, sleep debt may increase the severity of age-related chronic disorders.

*To whom correspondence should be addressed. E-mail: mignot@ 123456stanford.edu

DOI: 10.1371/journal.pmed.0010062
PMC ID: 535701
PubMed ID: 15602591
Copyright statement: Copyright: © 2004 Taheri et al. This is an open-access article distributed under the terms of the Creative Commons Attribution License, which permits unrestricted use, distribution, and reproduction in any medium, provided the original work is properly cited