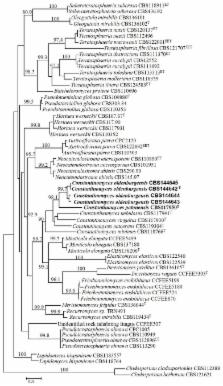 Subaerial biofilms (SAB) are an important factor in weathering, biofouling, and biodeterioration of bare rocks, building materials, and solar panel surfaces. The realm of SAB is continually widened by modern materials, and the settlers on these exposed solid surfaces always include melanized, stress-tolerant microcolonial ascomycetes. After their first discovery on desert rock surfaces, these melanized chaetothyrialean and dothidealean ascomycetes have been found on Mediterranean monuments after biocidal treatments, Antarctic rocks and solar panels. New man-made modifications of surfaces (e.g., treatment with biocides or photocatalytically active layers) accommodate the exceptional stress-tolerance of microcolonial fungi and thus further select for this well-protected ecological group. Melanized fungal strains were isolated from a microbial community that developed on highly photocatalytic roof tiles after a long-term environmental exposure in a maritime-influenced region in northwestern Germany. Four of the isolated strains are described here as a novel species, Constantinomyces oldenburgensis, based on multilocus ITS, LSU, RPB2 gene phylogeny. Their closest relative is a still-unnamed rock-inhabiting strain TRN431, here described as C. patonensis. Both species cluster in Capnodiales, among typical melanized microcolonial rock fungi from different stress habitats, including Antarctica. These novel strains flourish in hostile conditions of highly oxidizing material surfaces, and shall be used in reference procedures in material testing.

Gangolf Jobb,  Arndt von Haeseler,  Korbinian Strimmer (2004)
Background Most analysis programs for inferring molecular phylogenies are difficult to use, in particular for researchers with little programming experience. Results TREEFINDER is an easy-to-use integrative platform-independent analysis environment for molecular phylogenetics. In this paper the main features of TREEFINDER (version of April 2004) are described. TREEFINDER is written in ANSI C and Java and implements powerful statistical approaches for inferring gene tree and related analyzes. In addition, it provides a user-friendly graphical interface and a phylogenetic programming language. Conclusions TREEFINDER is a versatile framework for analyzing phylogenetic data across different platforms that is suited both for exploratory as well as advanced studies.

Introducing the Consolidated Species Concept to resolve species in the Teratosphaeriaceae

W. Quaedvlieg,  Alexandra Binder,  J.Z. Groenewald … (2014)
The Teratosphaeriaceae represents a recently established family that includes numerous saprobic, extremophilic, human opportunistic, and plant pathogenic fungi. Partial DNA sequence data of the 28S rRNA and RPB2 genes strongly support a separation of the Mycosphaerellaceae from the Teratosphaeriaceae, and also provide support for the Extremaceae and Neodevriesiaceae, two novel families including many extremophilic fungi that occur on a diversity of substrates. In addition, a multi-locus DNA sequence dataset was generated (ITS, LSU, Btub, Act, RPB2, EF-1α and Cal) to distinguish taxa in Mycosphaerella and Teratosphaeria associated with leaf disease of Eucalyptus, leading to the introduction of 23 novel genera, five species and 48 new combinations. Species are distinguished based on a polyphasic approach, combining morphological, ecological and phylogenetic species concepts, named here as the Consolidated Species Concept (CSC). From the DNA sequence data generated, we show that each one of the five coding genes tested, reliably identify most of the species present in this dataset (except species of Pseudocercospora). The ITS gene serves as a primary barcode locus as it is easily generated and has the most extensive dataset available, while either Btub, EF-1α or RPB2 provide a useful secondary barcode locus.