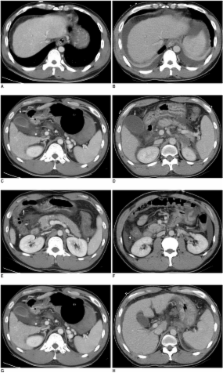 We wanted to evaluate the short-term effects of balloon-occluded retrograde transvenous obliteration (BRTO) for treating gastric variceal bleeding, in terms of the portal hypertensive changes, by comparing CT scans.

We enrolled 27 patients who underwent BRTO for gastric variceal bleeding and they had CT scans performed just before and after BRTO. The pre- and post-procedural CT scans were retrospectively compared by two radiologists working in consensus to evaluate the short-term effects of BRTO on the subsequent portal hypertensive changes, including ascites, splenomegaly, portosystemic collaterals (other than gastrorenal shunt), the gall bladder (GB) edema and the intestinal wall edema. Statistical differences were analyzed using the Wilcoxon signed rank test and the paired t-test.

Some portal hypertensive changes, including ascites and splenomegaly, can be aggravated shortly after BRTO.

S Hirota, M Tomita, M Sako … (1999)
To evaluate the clinical efficacy, techniques, and complications associated with balloon-occluded retrograde transvenous obliteration of gastric varices. Between December 1994 and November 1997, balloon-occluded retrograde transvenous obliteration was performed on 20 patients with gastric varices in danger of rupture and with gastrorenal shunts; three patients also had hepatic encephalopathy. The sclerosant was injected into the gastric varices during balloon occlusion. The degree of progression of the gastric varices and of collateral veins was classified into five grades, with grade 1 being least progression and grade 5 most progression; collateral veins that had developed were treated with embolization. Follow-up consisted of fiberoptic endoscopy and computed tomography. Technical success was achieved in all patients. Occlusion of collateral veins was essential for the occlusion of gastric varices with a grade greater than grade 2. The clinical symptoms of hepatic encephalopathy in the three patients improved remarkably. Follow-up endoscopy 3 months after the procedure revealed the disappearance of gastric varices in 15 patients and reduced variceal size in five. During the follow-up period, 19 patients had no recurrence of gastric varices; three patients had aggravation of the esophageal varices. Balloon-occluded retrograde transvenous obliteration is a feasible alternative to a transjugular intrahepatic portosystemic shunt for patients with large gastrorenal shunts or hepatic encephalopathy (or both).

Long-term results of balloon-occluded retrograde transvenous obliteration for the treatment of gastric varices and hepatic encephalopathy.

Yae Sugimura, T Fukuda, S Hirota (2001)
To evaluate the long-term results of balloon-occluded retrograde transvenous obliteration (B-RTO) for the treatment of gastric varices (GV) and hepatic encephalopathy. A total of 43 patients who had undergone B-RTO were evaluated, 32 with GV, two with hepatic encephalopathy, and nine with both. All but one had been consecutively followed up with gastrointestinal endoscopy for more than 1 year (3-60 months; mean, 30.44 months). Collateral veins of gastric varices were graded using balloon-occluded retrograde left adrenal venography. The relation of both worsening of esophageal varices (EV) and improved Child-Pugh score after B-RTO to the grades of collateral vein development was analyzed. The relapse-free survival and the prognostic factors for survival after B-RTO were also assessed. GV disappeared or decreased markedly in size, and hepatic encephalopathy was completely cured in all patients. Improvement in Child-Pugh score was observed in 21 patient (50.0%) 6 months after B-RTO, but in only 11 patients (25.6%) 1 year after B-RTO. Worsening of EV was seen in eight patients and was related to a worsened grade of collateral veins. Cumulative relapse-free survival rate was 90.8% at 1 year and 87.4% at 3 years after B-RTO. The most significant prognostic factor was Child-Pugh classification (relative risk: 4.16) B-RTO is a safe and effective treatment for patients with GV and hepatic encephalopathy. The most important prognostic factors are the extent of Child-Pugh classification.