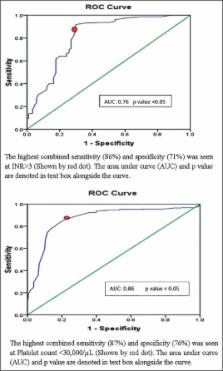 Central venous cannulation (CVC) is frequently required during the management of patients with liver disease with deranged conventional coagulation parameters (CCP). Since CVC is known to be associated with vascular complications, it is standard practice to transfuse Fresh-Frozen Plasma or platelets to correct CCP. These CCP may not reflect true coagulopathy in liver disease. Additionally CVC when performed under ultrasound guidance (USG-CVC) in itself reduces the incidence of complications.

To assess the safety of USG-CVC and to evaluate the incidence of complications among liver disease patients with coagulopathy.

An audit of all USG-CVCs was performed among adult patients with liver disease in a tertiary care center.

Data was collected for all the adult patients (18-60 years) of either gender suffering from liver disease who had required USG-CVC. Univariate and multivariate regression analysis was done to identify possible risk factors for complications.

The mean age of the patients was 42.1 ± 11.6 years. Mean international normalized ratio was 2.17 ± 1.16 whereas median platelet count was 149.5 (range, 12-683) × 10 9/L. No major vascular or non-vascular complications were recorded in our patients. Overall incidence of minor vascular complications was 18.6%, of which 13% had significant ooze, 10.3% had hematoma formation and 4.7% had both hematoma and ooze. Arterial puncture and multiple attempts were independent risk factors for superficial hematoma formation whereas low platelet count and presence of ascites were independent risk factors for significant oozing.

Paucity of studies to support that abnormal coagulation test results predict bleeding in the setting of invasive procedures: an evidence-based review.

B. Segal,  ,  Walter Dzik (2005)
The literature was systematically reviewed to determine whether a prolonged prothrombin time or elevated international normalized ratio predicts bleeding during invasive diagnostic procedures. MEDLINE and CENTRAL were searched through August 2004, with no language restriction, and reference lists were reviewed. For inclusion, articles must have reported on bleeding in more than five patients with abnormal test results undergoing diagnostic procedures. One trial and 24 observational studies were included. In 2 studies of bronchoscopy, the bleeding rates were similar among those with normal and abnormal tests, with wide confidence intervals (CIs) around the risk differences. During central vein cannulation (3 studies), bleeding rates among those with abnormal tests was unlikely to exceed 2.3 percent. The largest of 3 studies of arteriography found equivalent bleeding rates in patients with and without abnormal tests (risk difference, 0%; 95% CI, -3% to 2%). In the 3 studies of liver biopsy with plugging, bleeding rates were 0, 4, and 5 percent with the upper bounds of the CI as high as 17 percent. In the largest study of transjugular biopsy, the bleeding rate was 1.5 percent (95% CI, 0.3%-4%) in patients with abnormal tests. The highest bleeding rate in the 3 studies of percutaneous liver biopsy was 5.3 percent (95% CI, 1%-13%), similar to the rate in patients with normal test results. There is insufficient evidence to conclude that abnormal test results predict bleeding. Randomized controlled trials should be performed to provide stronger evidence for clinical decision making regarding preprocedure transfusion.