Screening of Vietnamese medicinal plants for NF-κB signaling inhibitors: Assessing the activity of flavonoids from the stem bark of Oroxylum indicum 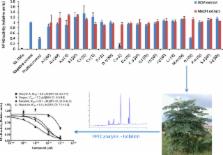 Seventeen plants used in Vietnamese traditional medicine for the treatment of inflammatory disorders were screened for NF-κB inhibitory activity. Oroxylum indicum, which exhibited activity, was investigated in detail.

Forty plant extracts from 17 species were prepared by maceration using dichloromethane and methanol and were tested (10 µg/mL) to evaluate their ability to inhibit NF-κB activation using TNF-α-stimulated HEK-293 cells stably transfected with a NF-κB-driven luciferase reporter. The active extract of Oroxylum indicum was subsequently fractionated by different chromatographic techniques. After isolation, all single compounds were identified by spectroscopic methods and assessed for NF-κB inhibitory effects.

The dichloromethane extracts obtained from Chromolaena odorata leaves and the stem bark of Oroxylum indicum showed distinct inhibitory effects on NF-κB activation at a concentration of 10 µg/mL. The active extract of Oroxylum indicum was subjected to further phytochemical studies resulting in identification of four flavonoid aglyca and six flavonoid glycosides. Pharmacological evaluation of the obtained compounds identified oroxylin A as the most active substance (IC 50=3.9 µM, 95% CI: 3.5–4.4 µM), while chrysin and hispidulin showed lower activity with IC 50=7.2 µM (95% CI: 6.0–8.8 µM) and 9.0 µM (95% CI: 7.9–10.2 µM), respectively. Interestingly, in this study the activity of baicalein (IC 50=28.1 µM, 95% CI: 24.6–32.0 µM) was weak. The isolated glycosides showed no inhibitory activity when tested at a concentration of 30 µM. Quantification of the four active flavonoids in extracts and plant materials suggested that oroxylin A contributes to the NF-κB inhibitory activity of the stem barks of Oroxylum indicum to a greater extent than baicalein which was thought to be responsible for the anti-inflammatory activity of this plant.

The screening presented in this study identified the dichloromethane extracts of Chromolaena odorata and Oroxylum indicum as promising sources for NF-κB inhibitors. Hispidulin, baicalein, chrysin and oroxylin A, isolated from Oroxylum indicum, were identified as inhibitors of NF- κB activation. 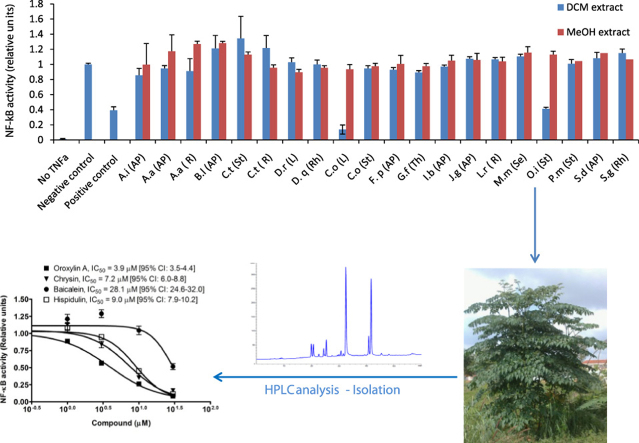 Alberto Mantovani,  M Borrello,  Antonio Sica … (2008)
Chronic and persistent inflammation contributes to cancer development and can predispose to carcinogenesis. Infection-driven inflammations are involved in the pathogenesis of approximately 15-20% of human tumors. However, even tumors that are not epidemiologically linked to pathogens are characterized by the presence of an inflammatory component in their microenvironment. Hallmarks of cancer-associated inflammation include the presence of infiltrating leukocytes, cytokines, chemokines, growth factors, lipid messengers, and matrix-degrading enzymes. Schematically, two interrelated pathways link inflammation and cancer: (1) genetic events leading to neoplastic transformation promote the construction of an inflammatory milieu; (2) tumor-infiltrating leukocytes, in particular macrophages, are prime regulators of cancer inflammation. Thus, an intrinsic pathway of inflammation (driven in tumor cells), as well as an extrinsic pathway (in tumor-infiltrating leukocytes) have been described and both contribute to tumor progression.

Oroxylin A inhibition of lipopolysaccharide-induced iNOS and COX-2 gene expression via suppression of nuclear factor-kappaB activation.

Stephen Lockett,  Christopher Lyles,  K Peifley … (2010)
Water soluble fullerenes, such as the hydroxylated fullerene, fullerenol (C₆₀OHx), are currently under development for diagnostic and therapeutic biomedical applications in the field of nanotechnology. These molecules have been shown to undergo urinary clearance, yet there is limited data available on their renal biocompatibility. Here we examine the biological responses of renal proximal tubule cells (LLC-PK1) exposed to fullerenol. Fullerenol was found to be cytotoxic in the millimolar range, with viability assessed by the sulforhodamine B and trypan blue assays. Fullerenol-induced cell death was associated with cytoskeleton disruption and autophagic vacuole accumulation. Interaction with the autophagy pathway was evaluated in vitro by Lysotracker Red dye uptake, LC3-II marker expression and TEM. Fullerenol treatment also resulted in coincident loss of cellular mitochondrial membrane potential and ATP depletion, as measured by the Mitotracker Red dye and the luciferin-luciferase assays, respectively. Fullerenol-induced ATP depletion and loss of mitochondrial potential were partially ameliorated by co-treatment with the autophagy inhibitor, 3-methyladenine. In vitro fullerenol treatment did not result in appreciable oxidative stress, as measured by lipid peroxide and glutathione content. Based on these data, it is hypothesized that cytoskeleton disruption may be an initiating event in fullerenol cytotoxicity, leading to subsequent autophagy dysfunction and loss of mitochondrial capacity. As nanoparticle-induced cytoskeleton disruption, autophagic vacuole accumulation and mitochondrial dysfunction are commonly reported in the literature, the proposed mechanism may be relevant for a variety of nanomaterials. Copyright © 2010 Elsevier Inc. All rights reserved.