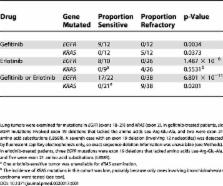 Our results suggest that treatment decisions regarding use of these kinase inhibitors might be improved by determining the mutational status of both EGFR and KRAS.

Ronald J. A. Wanders,  Kiliaan van Wees,  S. Kaplan … (2000)
Anticancer cytotoxic agents go through a process by which their antitumor activity-on the basis of the amount of tumor shrinkage they could generate-has been investigated. In the late 1970s, the International Union Against Cancer and the World Health Organization introduced specific criteria for the codification of tumor response evaluation. In 1994, several organizations involved in clinical research combined forces to tackle the review of these criteria on the basis of the experience and knowledge acquired since then. After several years of intensive discussions, a new set of guidelines is ready that will supersede the former criteria. In parallel to this initiative, one of the participating groups developed a model by which response rates could be derived from unidimensional measurement of tumor lesions instead of the usual bidimensional approach. This new concept has been largely validated by the Response Evaluation Criteria in Solid Tumors Group and integrated into the present guidelines. This special article also provides some philosophic background to clarify the various purposes of response evaluation. It proposes a model by which a combined assessment of all existing lesions, characterized by target lesions (to be measured) and nontarget lesions, is used to extrapolate an overall response to treatment. Methods of assessing tumor lesions are better codified, briefly within the guidelines and in more detail in Appendix I. All other aspects of response evaluation have been discussed, reviewed, and amended whenever appropriate.

Yoshitaka Fujii,  Jean C. Lee,  Katsuhiko Naoki … (2004)
Receptor tyrosine kinase genes were sequenced in non-small cell lung cancer (NSCLC) and matched normal tissue. Somatic mutations of the epidermal growth factor receptor gene EGFR were found in 15of 58 unselected tumors from Japan and 1 of 61 from the United States. Treatment with the EGFR kinase inhibitor gefitinib (Iressa) causes tumor regression in some patients with NSCLC, more frequently in Japan. EGFR mutations were found in additional lung cancer samples from U.S. patients who responded to gefitinib therapy and in a lung adenocarcinoma cell line that was hypersensitive to growth inhibition by gefitinib, but not in gefitinib-insensitive tumors or cell lines. These results suggest that EGFR mutations may predict sensitivity to gefitinib.

Competing Interests: VAM has received research funding from Genentech (co-developer of erlotinib). He has received honoraria from AstraZeneca (maker of gefitinib) for consultancy. MGK has received research funding from AstraZeneca and research funding and consulting fees from Genentech and has represented AstraZeneca before the US Food and Drug Administration. WP, VAM, MFZ, and HEV, represented by the Sloan-Kettering Institute for Cancer Research, filed on June 1, 2004, a provisional patent application entitled “Use of mutations in EGFR kinase as an indicator of therapeutic efficacy of erlotinib in the treatment of NSCLC,” serial number 60/576,275. HEV is Co-founder and Chair of the Board of Directors of the Public Library of Science.