The first survey of the beetles (Coleoptera) of the Farasan Archipelago of the southern Red Sea, Kingdom of Saudi Arabia 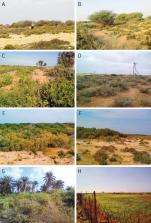 The Farasan Archipelago is a group of small coral islands and islets in the southern Red Sea, offshore of the southwestern Kingdom of Saudi Arabia (KSA). These islands are internationally important as breeding sites for turtles and bird species and regionally for its threatened, rare, and endemic flora and other fauna. The beetles ( Coleoptera ) of the Archipelago have not been previously surveyed. This study presents the first data on the beetle fauna based on a recent survey of the Farasan Archipelago. In total, 179 beetle species (including three synanthropic species) in 145 genera and 31 coleopteran families were determined. The Carabidae are represented by 31 species, followed by the Tenebrionidae (22 species), Chrysomelidae (17 species), Scarabaeidae (13 species), and Coccinellidae (12 species). The genus Lasiocera Dejean, 1831 and the species Amblystomus villiersanus Bruneau de Miré, 1991 ( Carabidae ) are new for the beetle fauna of the Arabian Peninsula, and eighteen species are new country records for KSA. Sand dune habitats on the islands were inhabited by the greatest number of species in comparison with other habitats. Zoogeographically, the beetle fauna of the Archipelago was dominated by the representatives of the Saharo-Arabian and Afrotropical elements (74 spp., 41.0%). Fourteen species (7.8%) were recognized as cosmopolitan and subcosmopolitan. No species was known to be exclusively endemic to Farasan Archipelago. Eighteen species (10.1%) were endemic to Arabian Peninsula and KSA. Approximately 64.8% (116 spp.) of the archipelago beetle species is found on the KSA mainland and is most closely allied to the south and southwestern KSA regions (sharing 91 spp.). Comparisons of the beetle faunas of the Farasan and Socotra archipelagos indicate that 30 families, 70 genera, and 28 species are shared.

Fifteen forms of biodiversity trend in the Anthropocene.

Brian McGill,  Maria Dornelas,  Nicholas Gotelli … (2015)
Humans are transforming the biosphere in unprecedented ways, raising the important question of how these impacts are changing biodiversity. Here we argue that our understanding of biodiversity trends in the Anthropocene, and our ability to protect the natural world, is impeded by a failure to consider different types of biodiversity measured at different spatial scales. We propose that ecologists should recognize and assess 15 distinct categories of biodiversity trend. We summarize what is known about each of these 15 categories, identify major gaps in our current knowledge, and recommend the next steps required for better understanding of trends in biodiversity.

Islands as model systems in ecology and evolution: prospects fifty years after MacArthur-Wilson.

Elena Conti,  Robin Aguilée,  Robert Ricklefs … (2015)
The study of islands as model systems has played an important role in the development of evolutionary and ecological theory. The 50th anniversary of MacArthur and Wilson's (December 1963) article, 'An equilibrium theory of insular zoogeography', was a recent milestone for this theme. Since 1963, island systems have provided new insights into the formation of ecological communities. Here, building on such developments, we highlight prospects for research on islands to improve our understanding of the ecology and evolution of communities in general. Throughout, we emphasise how attributes of islands combine to provide unusual research opportunities, the implications of which stretch far beyond islands. Molecular tools and increasing data acquisition now permit re-assessment of some fundamental issues that interested MacArthur and Wilson. These include the formation of ecological networks, species abundance distributions, and the contribution of evolution to community assembly. We also extend our prospects to other fields of ecology and evolution - understanding ecosystem functioning, speciation and diversification - frequently employing assets of oceanic islands in inferring the geographic area within which evolution has occurred, and potential barriers to gene flow. Although island-based theory is continually being enriched, incorporating non-equilibrium dynamics is identified as a major challenge for the future. © 2014 John Wiley & Sons Ltd/CNRS.

Rosemary G. Gillespie,  Elin M Claridge,  George Roderick (2008)
The flora and fauna of oceanic islands have inspired research since the early scientific explorations. Islands can be considered 'nature's test tubes'- simple systems with multiple replicates. Our research has used the simplicity of island systems to understand ecological community dynamics and to compare the properties of island communities with those in more complex mainland systems. Here, we present three topics: (i) current patterns of biodiversity on isolated islands of the Pacific; (ii) current patterns of disturbance and invasion on islands; and (iii) future trajectories inferred from these patterns. We examine features of islands (in particular, topography and isolation) that have allowed for given levels and distribution of endemicity. The extent to which island communities are impacted by, resist or accommodate disturbance and/or invasions by nonindigenous species appears to be dictated to a large extent by properties of the native communities and how these communities were originally assembled. Accordingly, patterns of disturbance and invasion are very different for high (montane) islands that are extremely isolated compared to those that are nearer to a source of natural migrants. As with all biotas, those on islands are dynamic entities. However, the unique aspect of islands is their isolation, and extreme isolation has largely been lost over the course of the last few centuries due to the development of transportation routes. We argue that such a modified dynamic will affect the future of the biota and the processes that gave rise to the biota. Specifically for isolated habitats, ecological processes will become increasingly more likely to generate biodiversity than evolutionary processes which have been relatively more important in the past. In the short term, island biotas and other similar biotas that occur in montane habitats may fare well as species are often abundant locally in the habitat to which they are indigenous, and may demonstrate considerable resistance and resilience to invasion. However, island biotas - and other biotas that show high local endemism - will likely not fare well in the face of prolonged disturbance. The biotas in these areas generally display a relatively low dispersal capacity; therefore, under conditions of long-term habitat modification, isolated biotas are likely to be swamped by non-natives, which - simply because of random processes and higher propagule pressure - will move more readily into available habitats. Thus, despite the importance of incorporating the evolutionary process into conservation efforts, we must also be careful to evaluate the likely form that the processes will take when the context (specifically, extent of isolation) has been highly modified.