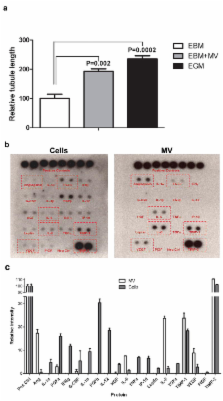 Radiotherapy plus concomitant and adjuvant temozolomide for glioblastoma.

Exosome-mediated transfer of mRNAs and microRNAs is a novel mechanism of genetic exchange between cells.

Margareta Sjöstrand,  Brian J. Lee,  J. Lötvall … (2007)
Exosomes are vesicles of endocytic origin released by many cells. These vesicles can mediate communication between cells, facilitating processes such as antigen presentation. Here, we show that exosomes from a mouse and a human mast cell line (MC/9 and HMC-1, respectively), as well as primary bone marrow-derived mouse mast cells, contain RNA. Microarray assessments revealed the presence of mRNA from approximately 1300 genes, many of which are not present in the cytoplasm of the donor cell. In vitro translation proved that the exosome mRNAs were functional. Quality control RNA analysis of total RNA derived from exosomes also revealed presence of small RNAs, including microRNAs. The RNA from mast cell exosomes is transferable to other mouse and human mast cells. After transfer of mouse exosomal RNA to human mast cells, new mouse proteins were found in the recipient cells, indicating that transferred exosomal mRNA can be translated after entering another cell. In summary, we show that exosomes contain both mRNA and microRNA, which can be delivered to another cell, and can be functional in this new location. We propose that this RNA is called "exosomal shuttle RNA" (esRNA).

Angiogenesis in cancer and other diseases.

P Carmeliet,  R Jain (2000)
Pathological angiogenesis is a hallmark of cancer and various ischaemic and inflammatory diseases. Concentrated efforts in this area of research are leading to the discovery of a growing number of pro- and anti-angiogenic molecules, some of which are already in clinical trials. The complex interactions among these molecules and how they affect vascular structure and function in different environments are now beginning to be elucidated. This integrated understanding is leading to the development of a number of exciting and bold approaches to treat cancer and other diseases. But owing to several unanswered questions, caution is needed.