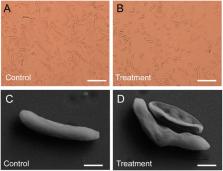 Fusarium wilt of banana caused by Fusarium oxysporum f. sp. cubense (Foc) is one of the most destructive diseases, severely limiting the development of banana industry. Especially, Foc tropical race 4 (Foc TR4) can infect and destroy almost all banana cultivars. Until now, there is still a lack of an effective method for controlling fusarium wilt. A biocontrol strategy using Actinobacteria is considered as a promising method for management of disease and pest. In this study, 229 Actinobacteria were isolated from rhizosphere soil samples of a primitive ecological mountain. An actinobacterium strain marked with YYS-7 exhibited a high antifungal activity against Foc TR4. Combining the physiological and biochemical characteristics as well as alignment of the 16S rRNA sequence, the strain YYS-7 was assigned to Streptomyces sp. The crude extracts of Streptomyces sp. YYS-7 obviously inhibited the mycelial growth of Foc TR4. The cell integrity and ultrastructure were seriously destroyed. In addition, Streptomyces sp. YYS-7 and crude extracts also showed a broad-spectrum antifungal activity against the selected seven phytopathogenic fungi. A gas chromatography-mass spectrometry (GC-MS) was used to predict the antifungal metabolites. A total of eleven different compounds were identified, including phenolic compounds, hydrocarbons, esters and acids. In the pot experiment, the crude extracts can significantly improve the banana plant’s resistance to Foc TR4. Hence, Streptomyces sp. YYS-7 will be a potential biocontrol agent for the biofertilizer exploitation and the discovery of new bioactive substances.

Humic acid-vitamin agar, a new medium for the selective isolation of soil actinomycetes

M Goodfellow,  P H SNEATH,  S. Williams … (1983)
Four hundred and seventy-five strains, which included 394 type cultures of Streptomyces and representatives of 14 other actinomycete genera, were studied. Overall similarities of these strains for 139 unit characters were determined by the SSM and SJ coefficients and clustering by the UPGMA algorithm. Test error and overlap between the phena defined were within acceptable limits. Cluster-groups were defined by the SSM coefficient at the 70.1% similarity (S) level and by the SJ coefficient at the 50% S-level. Clusters were distinguished at the 77.5% SSM and 63% SJ S-levels. Groupings obtained with the two coefficients were generally similar, but there were some changes in the definition and membership of cluster-groups and clusters. The phenetic data obtained, together with those from previous diverse studies, indicated that the genera Actinopycnidium, Actinosporangium, Chainia, Elytrosporangium, Kitasatoa and Microellobosporia should be reduced to synonyms of Streptomyces, while Intrasporangium, Nocardioides and Streptoverticillium remained as distinct genera in the family Streptomycetaceae. Nocardiopsis dassonvillei also showed strong phenetic affinity to Streptomyces, despite its chemotaxonomic differences. Actinomadura sensu stricto was phenetically distinguishable from Streptomyces and 'Nocardia' mediterranea was recognized as a taxon distinct from both these genera and from Nocardia sensu stricto. Most of the Streptomyces type cultures fell into one large cluster-group. At the 77.5% SSM S-level, they were recovered in 19 major and 40 minor clusters, with 18 strains recovered as single member clusters. The status of the latter as species was therefore confirmed. Most of the minor clusters, consisting of two to five strains, can also be regarded as species. The major clusters varied in size (from 6 to 71 strains) and in there homogeneity. Therefore, it is suggested that they be regarded as species-groups until further information is available. The results provide a basis for the reduction of the large number of Streptomyces species which have been described. They also demonstrate that the previous use of a limited number of subjectively chosen characters to define species-groups or species has resulted in artificial classifications.

Plant growth promotion and biological control of Pythium aphanidermatum, a pathogen of cucumber, by endophytic actinomycetes.

K A El-Tarabily,  A Nassar,  G Hardy … (2009)
To evaluate the potential of Actinoplanes campanulatus, Micromonospora chalcea and Streptomyces spiralis endophytic in cucumber roots, to promote plant growth and to protect seedlings and mature plants of cucumber from diseases caused by Pythium aphanidermatum, under greenhouse conditions.

This article was submitted to Fungi and Their Interactions, a section of the journal Frontiers in Microbiology