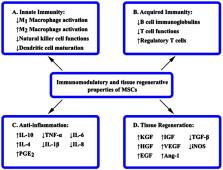 The coronavirus disease 2019 (COVID-19) global pandemic continues and antiviral agents and vaccines are currently under investigation. Mesenchymal stem cell (MSC)-based therapy can be a suitable option for management of patients with COVID-19 at the urgent time of virus outbreak. Currently, MSCs are being explored against the novel infectious disease due to their therapeutic properties of anti-inflammation, immunomodulation and tissue repair and regeneration, albeit the precise mechanisms of MSC action toward COVID-19 remain unclear. To date, rigorous results from clinical trials using MSCs in human have been weakly positive. The pervasive uncertainty of using MSC therapeutic products as an effective combatant against COVID-19 requires rigorous resolution on several fronts, including MSC fate after infusion, safety issue, homing capability, and MSC resistance to the disease microenvironment. Focusing on these facets, a few important ones will be critically analyzed and addressed in this article for the development of safe and effective MSC-based therapies for COVID-19.

Jeffrey L Spees,  Ryang Hwa Lee,  Carl A. Gregory (2016)
The past decade has seen an explosion of research directed toward better understanding of the mechanisms of mesenchymal stem/stromal cell (MSC) function during rescue and repair of injured organs and tissues. In addition to delineating cell–cell signaling and molecular controls for MSC differentiation, the field has made particular progress in defining several other mechanisms through which administered MSCs can promote tissue rescue/repair. These include: 1) paracrine activity that involves secretion of proteins/peptides and hormones; 2) transfer of mitochondria by way of tunneling nanotubes or microvesicles; and 3) transfer of exosomes or microvesicles containing RNA and other molecules. Improved understanding of MSC function holds great promise for the application of cell therapy and also for the development of powerful cell-derived therapeutics for regenerative medicine. Focusing on these three mechanisms, we discuss MSC-mediated effects on immune cell responses, cell survival, and fibrosis and review recent progress with MSC-based or MSC-derived therapeutics.

Mesenchymal stem cell homing: the devil is in the details.

G. Leng,  Heini Karp (2009)
The study of MSC trafficking is clinically relevant for minimally invasive cell therapy to promote regeneration of damaged tissue, to treat inflammation, and to promote angiogenesis. However, these studies are complicated by the diverse methods used to culture, characterize, and deliver MSCs and by the variety of methods used to assess homing events. This review provides a critical analysis of the methods used to track homing of exogenously infused MSCs and discusses strategies for enhancing their trafficking to particular tissues.

Carlos Salomon,  Jennifer Ryan,  Luis Sobrevia … (2013)
Vasculogenesis and angiogenesis are critical processes in fetal circulation and placental vasculature development. Placental mesenchymal stem cells (pMSC) are known to release paracrine factors (some of which are contained within exosomes) that promote angiogenesis and cell migration. The aims of this study were: to determine the effects of oxygen tension on the release of exosomes from pMSC; and to establish the effects of pMSC-derived exosomes on the migration and angiogenic tube formation of placental microvascular endothelial cells (hPMEC). pMSC were isolated from placental villi (8–12 weeks of gestation, n = 6) and cultured under an atmosphere of 1%, 3% or 8% O2. Cell-conditioned media were collected and exosomes (exo-pMSC) isolated by differential and buoyant density centrifugation. The dose effect (5–20 µg exosomal protein/ml) of pMSC-derived exosomes on hPMEC migration and tube formation were established using a real-time, live-cell imaging system (Incucyte™). The exosome pellet was resuspended in PBS and protein content was established by mass spectrometry (MS). Protein function and canonical pathways were identified using the PANTHER program and Ingenuity Pathway Analysis, respectively. Exo-pMSC were identified, by electron microscopy, as spherical vesicles, with a typical cup-shape and diameters around of 100 nm and positive for exosome markers: CD63, CD9 and CD81. Under hypoxic conditions (1% and 3% O2) exo-pMSC released increased by 3.3 and 6.7 folds, respectively, when compared to the controls (8% O2; p<0.01). Exo-pMSC increased hPMEC migration by 1.6 fold compared to the control (p<0.05) and increased hPMEC tube formation by 7.2 fold (p<0.05). MS analysis identified 390 different proteins involved in cytoskeleton organization, development, immunomodulatory, and cell-to-cell communication. The data obtained support the hypothesis that pMSC-derived exosomes may contribute to placental vascular adaptation to low oxygen tension under both physiological and pathological conditions.