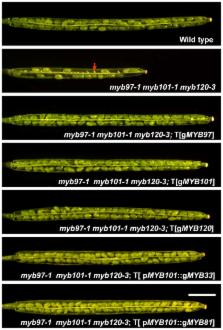 Pollen tube reception involves a pollen tube-synergid interaction that controls the discharge of sperm cells into the embryo sac during plant fertilization. Despite its importance in the sexual reproduction of plants, little is known about the role of gene regulation in this process. We report here that the pollen-expressed transcription factors MYB97, MYB101 and MYB120 probably control genes whose encoded proteins play important roles in Arabidopsis thaliana pollen tube reception. They share a high amino acid sequence identity and are expressed mainly in mature pollen grains and pollen tubes. None of the single or double mutants of these three genes exhibited any visible defective phenotype. Although the myb97 myb101 myb120 triple mutant was not defective in pollen development, pollen germination, pollen tube growth or tube guidance, the pollen tubes of the triple mutants exhibited uncontrolled growth and failed to discharge their sperm cells after entering the embryo sac. In addition, the myb97 myb101 myb120 triple mutation significantly affected the expression of a group of pollen-expressed genes in mature pollen grains. All these results indicate that MYB97, MYB101 and MYB120 participate in pollen tube reception, possibly by controlling the expression of downstream genes.

Jonathan Millar,  Ewan K. A. Millar,  Frank Gubler (2005)
The functions of the vast majority of genes encoding R2R3 MYB domain proteins remain unknown. The closely related MYB33 and MYB65 genes of Arabidopsis thaliana have high sequence similarity to the barley (Hordeum vulgare) GAMYB gene. T-DNA insertional mutants were isolated for both genes, and a myb33 myb65 double mutant was defective in anther development. In myb33 myb65 anthers, the tapetum undergoes hypertrophy at the pollen mother cell stage, resulting in premeiotic abortion of pollen development. However, myb33 myb65 sterility was conditional, where fertility increased both under higher light or lower temperature conditions. Thus, MYB33/MYB65 facilitate, but are not essential for, anther development. Neither single mutant displayed a phenotype, implying that MYB33 and MYB65 are functionally redundant. Consistent with functional redundancy, promoter-beta-glucuronidase (GUS) fusions of MYB33 and MYB65 gave identical expression patterns in flowers (sepals, style, receptacle, anther filaments, and connective but not in anthers themselves), shoot apices, and root tips. By contrast, expression of a MYB33:GUS translational fusion in flowers was solely in young anthers (consistent with the male sterile phenotype), and no staining was seen in shoot meristems or root tips. A microRNA target sequence is present in the MYB genes, and mutating this sequence in the MYB33:GUS fusion results in an expanded expression pattern, in tissues similar to that observed in the promoter-GUS lines, implying that the microRNA target sequence is restricting MYB33 expression. Arabidopsis transformed with MYB33 containing the mutated microRNA target had dramatic pleiotrophic developmental defects, suggesting that restricting MYB33 expression, especially in the shoot apices, is essential for proper plant development.

Akane Mizukami,  Ryushiro Kasahara,  Yuki Hamamura … (2009)
For more than 140 years, pollen tube guidance in flowering plants has been thought to be mediated by chemoattractants derived from target ovules. However, there has been no convincing evidence of any particular molecule being the true attractant that actually controls the navigation of pollen tubes towards ovules. Emerging data indicate that two synergid cells on the side of the egg cell emit a diffusible, species-specific signal to attract the pollen tube at the last step of pollen tube guidance. Here we report that secreted, cysteine-rich polypeptides (CRPs) in a subgroup of defensin-like proteins are attractants derived from the synergid cells. We isolated synergid cells of Torenia fournieri, a unique plant with a protruding embryo sac, to identify transcripts encoding secreted proteins as candidate molecules for the chemoattractant(s). We found two CRPs, abundantly and predominantly expressed in the synergid cell, which are secreted to the surface of the egg apparatus. Moreover, they showed activity in vitro to attract competent pollen tubes of their own species and were named as LUREs. Injection of morpholino antisense oligomers against the LUREs impaired pollen tube attraction, supporting the finding that LUREs are the attractants derived from the synergid cells of T. fournieri.

Michael Federer,  Ueli Grossniklaus,  Norbert Huck … (2003)
Reproduction in angiosperms depends on communication processes of the male gametophyte (pollen) with the female floral organs (pistil, transmitting tissue) and the female gametophyte (embryo sac). Pollen-pistil interactions control pollen hydration, germination and growth through the stylar tissue. The female gametophyte is involved in guiding the growing pollen tube towards the micropyle and embryo sac. One of the two synergids flanking the egg cell starts to degenerate and becomes receptive for pollen tube entry. Pollen tube growth arrests and the tip of the pollen tube ruptures to release the sperm cells. Failures in the mutual interaction between the synergid and the pollen tube necessarily impair fertility. But the control of pollen tube reception is not understood. We isolated a semisterile, female gametophytic mutant from Arabidopsis thaliana, named feronia after the Etruscan goddess of fertility, which impairs this process. In the feronia mutant, embryo sac development and pollen tube guidance were unaffected in all ovules, although one half of the ovules bore mutant female gametophytes. However, when the pollen tube entered the receptive synergid of a feronia mutant female gametophyte, it continued to grow, failed to rupture and release the sperm cells, and invaded the embryo sac. Thus, the feronia mutation disrupts the interaction between the male and female gametophyte required to elicit these processes. Frequently, mutant embryo sacs received supernumerary pollen tubes. We analysed feronia with synergid-specific GUS marker lines, which demonstrated that the specification and differentiation of the synergids was normal. However, GUS expression in mutant gametophytes persisted after pollen tube entry, in contrast to wild-type embryo sacs where it rapidly decreased. Apparently, the failure in pollen tube reception results in the continued expression of synergid-specific genes, probably leading to an extended expression of a potential pollen tube attractant.

This work was supported by the research grants from the Natural Science Foundation of China (NSFC, project number 31130007), the Ministry of Sciences and Technology (project number 2013CB945100) and the Ministry of Education (111 project number B06003). The funders had no role in study design, data collection and analysis, decision to publish, or preparation of the manuscript.