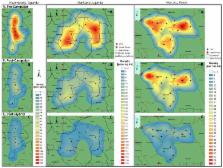 Despite large investments in HIV testing, only 45% of HIV-infected persons in sub-Saharan Africa are estimated to know their status. Optimal methods for maximizing population-level testing remain unknown. We sought to demonstrate the effectiveness at achieving population-wide testing coverage of a hybrid mobile HIV testing approach.

From 2013–2014, we enumerated 168,772 adult (≥15 years) residents of 32 communities in Uganda (N=20), and Kenya (N=12) using a door-to-door census. “Stable” residence was defined as living in community for ≥6 months over the past year. In each community we performed 2-week multi-disease community health campaigns (CHC) that included HIV testing, counseling, and referral to care if HIV-infected; CHC non-participants were approached for home-based testing (HBT) over 1–2 months. We determined population HIV testing coverage, and predictors of testing via HBT (vs. CHC) and non-testing.

Susan Eshleman,  S. Godbole,  Estelle Piwowar-Manning … (2012)
Antiretroviral therapy that reduces viral replication could limit the transmission of human immunodeficiency virus type 1 (HIV-1) in serodiscordant couples. In nine countries, we enrolled 1763 couples in which one partner was HIV-1-positive and the other was HIV-1-negative; 54% of the subjects were from Africa, and 50% of infected partners were men. HIV-1-infected subjects with CD4 counts between 350 and 550 cells per cubic millimeter were randomly assigned in a 1:1 ratio to receive antiretroviral therapy either immediately (early therapy) or after a decline in the CD4 count or the onset of HIV-1-related symptoms (delayed therapy). The primary prevention end point was linked HIV-1 transmission in HIV-1-negative partners. The primary clinical end point was the earliest occurrence of pulmonary tuberculosis, severe bacterial infection, a World Health Organization stage 4 event, or death. As of February 21, 2011, a total of 39 HIV-1 transmissions were observed (incidence rate, 1.2 per 100 person-years; 95% confidence interval [CI], 0.9 to 1.7); of these, 28 were virologically linked to the infected partner (incidence rate, 0.9 per 100 person-years, 95% CI, 0.6 to 1.3). Of the 28 linked transmissions, only 1 occurred in the early-therapy group (hazard ratio, 0.04; 95% CI, 0.01 to 0.27; P<0.001). Subjects receiving early therapy had fewer treatment end points (hazard ratio, 0.59; 95% CI, 0.40 to 0.88; P=0.01). The early initiation of antiretroviral therapy reduced rates of sexual transmission of HIV-1 and clinical events, indicating both personal and public health benefits from such therapy. (Funded by the National Institute of Allergy and Infectious Diseases and others; HPTN 052 ClinicalTrials.gov number, NCT00074581.).

Estimating wealth effects without expenditure data--or tears: an application to educational enrollments in states of India.

D Filmer,  Christopher Pritchett,  Lyle Konigsberg (2001)
Using data from India, we estimate the relationship between household wealth and children's school enrollment. We proxy wealth by constructing a linear index from asset ownership indicators, using principal-components analysis to derive weights. In Indian data this index is robust to the assets included, and produces internally coherent results. State-level results correspond well to independent data on per capita output and poverty. To validate the method and to show that the asset index predicts enrollments as accurately as expenditures, or more so, we use data sets from Indonesia, Pakistan, and Nepal that contain information on both expenditures and assets. The results show large, variable wealth gaps in children's enrollment across Indian states. On average a "rich" child is 31 percentage points more likely to be enrolled than a "poor" child, but this gap varies from only 4.6 percentage points in Kerala to 38.2 in Uttar Pradesh and 42.6 in Bihar.

Darshini Govindasamy,  Katharina Kranzer,  Nathan Ford (2012)
To characterize patient and programmatic factors associated with retention in care during the pre-antiretroviral therapy (ART) period and linkage to ART care. Systematic literature review. An electronic search was conducted on MEDLINE, Global Health, Google Scholar and conference databases to identify studies reporting on predictors, barriers and facilitators of retention in care in the pre-ART period, and linkage to care at three steps: ART-eligibility assessment, pre-ART care and ART initiation. Factors associated with attrition were then divided into areas for intervention. Seven hundred and sixty-eight citations were identified. Forty-two studies from 12 countries were included for review, with the majority from South Africa (16). The most commonly cited category of factors was transport costs and distance. Stigma and fear of disclosure comprised the second most commonly cited category of factors followed by staff shortages, long waiting times, fear of drug side effects, male sex, younger age and the need to take time off work. This review highlights the importance of investigating interventions that could reduce transport difficulties. Decentralization, task-shifting and integration of services need to be expedited to alleviate health system barriers. Patient support groups and strategic posttest counselling are essential to assist patients deal with stigma and disclosure. Moreover, well tolerated first-line drugs and treatment literacy programmes are needed to improve acceptance of ART. This review suggests a combination of interventions to retain specific groups at risk for attrition such as workplace programmes for employed patients, dedicated clinic and support programmes for men and younger individuals.