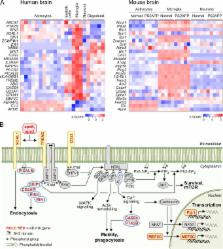 Hansen et al. review the potential dual helpful and harmful roles of microglia in the development and progression of Alzheimer’s disease.

Proliferation and activation of microglia in the brain, concentrated around amyloid plaques, is a prominent feature of Alzheimer’s disease (AD). Human genetics data point to a key role for microglia in the pathogenesis of AD. The majority of risk genes for AD are highly expressed (and many are selectively expressed) by microglia in the brain. There is mounting evidence that microglia protect against the incidence of AD, as impaired microglial activities and altered microglial responses to β-amyloid are associated with increased AD risk. On the other hand, there is also abundant evidence that activated microglia can be harmful to neurons. Microglia can mediate synapse loss by engulfment of synapses, likely via a complement-dependent mechanism; they can also exacerbate tau pathology and secrete inflammatory factors that can injure neurons directly or via activation of neurotoxic astrocytes. Gene expression profiles indicate multiple states of microglial activation in neurodegenerative disease settings, which might explain the disparate roles of microglia in the development and progression of AD pathology.

Shane Liddelow, Kevin A. Guttenplan, Laura Clarke … (2017)
A reactive astrocyte subtype termed A1 is induced after injury or disease of the central nervous system and subsequently promotes the death of neurons and oligodendrocytes.

Hadas Keren‐Shaul, Amit Spinrad, Assaf Weiner … (2017)
Alzheimer's disease (AD) is a detrimental neurodegenerative disease with no effective treatments. Due to cellular heterogeneity, defining the roles of immune cell subsets in AD onset and progression has been challenging. Using transcriptional single-cell sorting, we comprehensively map all immune populations in wild-type and AD-transgenic (Tg-AD) mouse brains. We describe a novel microglia type associated with neurodegenerative diseases (DAM) and identify markers, spatial localization, and pathways associated with these cells. Immunohistochemical staining of mice and human brain slices shows DAM with intracellular/phagocytic Aβ particles. Single-cell analysis of DAM in Tg-AD and triggering receptor expressed on myeloid cells 2 (Trem2)(-/-) Tg-AD reveals that the DAM program is activated in a two-step process. Activation is initiated in a Trem2-independent manner that involves downregulation of microglia checkpoints, followed by activation of a Trem2-dependent program. This unique microglia-type has the potential to restrict neurodegeneration, which may have important implications for future treatment of AD and other neurodegenerative diseases. VIDEO ABSTRACT.

Dennis Selkoe, John Hardy (2016)
Abstract Despite continuing debate about the amyloid β‐protein (or Aβ hypothesis, new lines of evidence from laboratories and clinics worldwide support the concept that an imbalance between production and clearance of Aβ42 and related Aβ peptides is a very early, often initiating factor in Alzheimer's disease (AD). Confirmation that presenilin is the catalytic site of γ‐secretase has provided a linchpin: all dominant mutations causing early‐onset AD occur either in the substrate (amyloid precursor protein, APP) or the protease (presenilin) of the reaction that generates Aβ. Duplication of the wild‐type APP gene in Down's syndrome leads to Aβ deposits in the teens, followed by microgliosis, astrocytosis, and neurofibrillary tangles typical of AD. Apolipoprotein E4, which predisposes to AD in > 40% of cases, has been found to impair Aβ clearance from the brain. Soluble oligomers of Aβ42 isolated from AD patients' brains can decrease synapse number, inhibit long‐term potentiation, and enhance long‐term synaptic depression in rodent hippocampus, and injecting them into healthy rats impairs memory. The human oligomers also induce hyperphosphorylation of tau at AD‐relevant epitopes and cause neuritic dystrophy in cultured neurons. Crossing human APP with human tau transgenic mice enhances tau‐positive neurotoxicity. In humans, new studies show that low cerebrospinal fluid (CSF) Aβ42 and amyloid‐PET positivity precede other AD manifestations by many years. Most importantly, recent trials of three different Aβ antibodies (solanezumab, crenezumab, and aducanumab) have suggested a slowing of cognitive decline in post hoc analyses of mild AD subjects. Although many factors contribute to AD pathogenesis, Aβ dyshomeostasis has emerged as the most extensively validated and compelling therapeutic target.

This article is distributed under the terms of an Attribution–Noncommercial–Share Alike–No Mirror Sites license for the first six months after the publication date (see http://www.rupress.org/terms/). After six months it is available under a Creative Commons License (Attribution–Noncommercial–Share Alike 4.0 International license, as described at https://creativecommons.org/licenses/by-nc-sa/4.0/).