Discrimination in the workplace, reported by people with major depressive disorder: a cross-sectional study in 35 countries 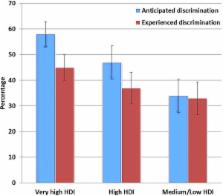 Whereas employment has been shown to be beneficial for people with Major Depressive Disorder (MDD) across different cultures, employers’ attitudes have been shown to be negative towards workers with MDD. This may form an important barrier to work participation. Today, little is known about how stigma and discrimination affect work participation of workers with MDD, especially from their own perspective. We aimed to assess, in a working age population including respondents with MDD from 35 countries: (1) if people with MDD anticipate and experience discrimination when trying to find or keep paid employment; (2) if participants in high, middle and lower developed countries differ in these respects; and (3) if discrimination experiences are related to actual employment status (ie, having a paid job or not).

Participants in this cross-sectional study (N=834) had a diagnosis of MDD in the previous 12 months. They were interviewed using the Discrimination and Stigma Scale (DISC-12). Analysis of variance and generalised linear mixed models were used to analyse the data.

D. López,  Majid Ezzati,  Christopher Murray … (2006)
Our aim was to calculate the global burden of disease and risk factors for 2001, to examine regional trends from 1990 to 2001, and to provide a starting point for the analysis of the Disease Control Priorities Project (DCPP). We calculated mortality, incidence, prevalence, and disability adjusted life years (DALYs) for 136 diseases and injuries, for seven income/geographic country groups. To assess trends, we re-estimated all-cause mortality for 1990 with the same methods as for 2001. We estimated mortality and disease burden attributable to 19 risk factors. About 56 million people died in 2001. Of these, 10.6 million were children, 99% of whom lived in low-and-middle-income countries. More than half of child deaths in 2001 were attributable to acute respiratory infections, measles, diarrhoea, malaria, and HIV/AIDS. The ten leading diseases for global disease burden were perinatal conditions, lower respiratory infections, ischaemic heart disease, cerebrovascular disease, HIV/AIDS, diarrhoeal diseases, unipolar major depression, malaria, chronic obstructive pulmonary disease, and tuberculosis. There was a 20% reduction in global disease burden per head due to communicable, maternal, perinatal, and nutritional conditions between 1990 and 2001. Almost half the disease burden in low-and-middle-income countries is now from non-communicable diseases (disease burden per head in Sub-Saharan Africa and the low-and-middle-income countries of Europe and Central Asia increased between 1990 and 2001). Undernutrition remains the leading risk factor for health loss. An estimated 45% of global mortality and 36% of global disease burden are attributable to the joint hazardous effects of the 19 risk factors studied. Uncertainty in all-cause mortality estimates ranged from around 1% in high-income countries to 15-20% in Sub-Saharan Africa. Uncertainty was larger for mortality from specific diseases, and for incidence and prevalence of non-fatal outcomes. Despite uncertainties about mortality and burden of disease estimates, our findings suggest that substantial gains in health have been achieved in most populations, countered by the HIV/AIDS epidemic in Sub-Saharan Africa and setbacks in adult mortality in countries of the former Soviet Union. Our results on major disease, injury, and risk factor causes of loss of health, together with information on the cost-effectiveness of interventions, can assist in accelerating progress towards better health and reducing the persistent differentials in health between poor and rich countries.

Depression, chronic diseases, and decrements in health: results from the World Health Surveys.

Bedirhan Ustun,  Emese Verdes,  Somnath Chatterji … (2007)
Depression is an important public-health problem, and one of the leading causes of disease burden worldwide. Depression is often comorbid with other chronic diseases and can worsen their associated health outcomes. Few studies have explored the effect of depression, alone or as a comorbidity, on overall health status. The WHO World Health Survey (WHS) studied adults aged 18 years and older to obtain data for health, health-related outcomes, and their determinants. Prevalence of depression in respondents based on ICD-10 criteria was estimated. Prevalence values for four chronic physical diseases--angina, arthritis, asthma, and diabetes--were also estimated using algorithms derived via a Diagnostic Item Probability Study. Mean health scores were constructed using factor analysis and compared across different disease states and demographic variables. The relation of these disease states to mean health scores was determined through regression modelling. Observations were available for 245 404 participants from 60 countries in all regions of the world. Overall, 1-year prevalence for ICD-10 depressive episode alone was 3.2% (95% CI 3.0-3.5); for angina 4.5% (4.3-4.8); for arthritis 4.1% (3.8-4.3); for asthma 3.3% (2.9-3.6); and for diabetes 2.0% (1.8-2.2). An average of between 9.3% and 23.0% of participants with one or more chronic physical disease had comorbid depression. This result was significantly higher than the likelihood of having depression in the absence of a chronic physical disease (p<0.0001). After adjustment for socioeconomic factors and health conditions, depression had the largest effect on worsening mean health scores compared with the other chronic conditions. Consistently across countries and different demographic characteristics, respondents with depression comorbid with one or more chronic diseases had the worst health scores of all the disease states. Depression produces the greatest decrement in health compared with the chronic diseases angina, arthritis, asthma, and diabetes. The comorbid state of depression incrementally worsens health compared with depression alone, with any of the chronic diseases alone, and with any combination of chronic diseases without depression. These results indicate the urgency of addressing depression as a public-health priority to reduce disease burden and disability, and to improve the overall health of populations.

Global pattern of experienced and anticipated discrimination against people with schizophrenia: a cross-sectional survey.