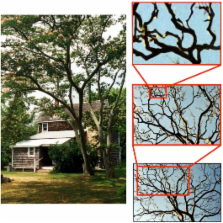 Fractals have been very successful in quantifying the visual complexity exhibited by many natural patterns, and have captured the imagination of scientists and artists alike. Our research has shown that the poured patterns of the American abstract painter Jackson Pollock are also fractal. This discovery raises an intriguing possibility – are the visual characteristics of fractals responsible for the long-term appeal of Pollock's work? To address this question, we have conducted 10 years of scientific investigation of human response to fractals and here we present, for the first time, a review of this research that examines the inter-relationship between the various results. The investigations include eye tracking, visual preference, skin conductance, and EEG measurement techniques. We discuss the artistic implications of the positive perceptual and physiological responses to fractal patterns.

H Laufs,  K Krakow,  P Sterzer … (2003)
We assessed the relation between hemodynamic and electrical indices of brain function by performing simultaneous functional MRI (fMRI) and electroencephalography (EEG) in awake subjects at rest with eyes closed. Spontaneous power fluctuations of electrical rhythms were determined for multiple discrete frequency bands, and associated fMRI signal modulations were mapped on a voxel-by-voxel basis. There was little positive correlation of localized brain activity with alpha power (8-12 Hz), but strong and widespread negative correlation in lateral frontal and parietal cortices that are known to support attentional processes. Power in a 17-23 Hz range of beta activity was positively correlated with activity in retrosplenial, temporo-parietal, and dorsomedial prefrontal cortices. This set of areas has previously been characterized by high but coupled metabolism and blood flow at rest that decrease whenever subjects engage in explicit perception or action. The distributed patterns of fMRI activity that were correlated with power in different EEG bands overlapped strongly with those of functional connectivity, i.e., intrinsic covariations of regional activity at rest. This result indicates that, during resting wakefulness, and hence the absence of a task, these areas constitute separable and dynamic functional networks, and that activity in these networks is associated with distinct EEG signatures. Taken together with studies that have explicitly characterized the response properties of these distributed cortical systems, our findings may suggest that alpha oscillations signal a neural baseline with "inattention" whereas beta rhythms index spontaneous cognitive operations during conscious rest.

H Laufs,  A. Kleinschmidt,  A Beyerle … (2003)
Electroencephalography-correlated functional magnetic resonance imaging (EEG/fMRI) can be used to identify blood oxygen level-dependent (BOLD) signal changes associated with both physiological and pathological EEG events. Here, we implemented continuous and simultaneous EEG/fMRI to identify BOLD signal changes related to spontaneous power fluctuations in the alpha rhythm (8-12 Hz), the dominant EEG pattern during relaxed wakefulness. Thirty-two channels of EEG were recorded in 10 subjects during eyes-closed rest inside a 1.5-T magnet resonance (MR) scanner using an MR-compatible EEG recording system. Functional scanning by echoplanar imaging covered almost the entire cerebrum every 4 s. Off-line MRI artifact subtraction software was applied to obtain continuous EEG data during fMRI acquisition. The average alpha power over 1-s epochs was derived at several electrode positions using a Fast Fourier Transform. The power time course was then convolved with a canonical hemodynamic response function, down-sampled, and used for statistical parametric mapping of associated signal changes in the image time series. At all electrode positions studied, a strong negative correlation of parietal and frontal cortical activity with alpha power was found. Conversely, only sparse and nonsystematic positive correlation was detected. The relevance of these findings is discussed in view of the current theories on the generation and significance of the alpha rhythm and the related functional neuroimaging findings.