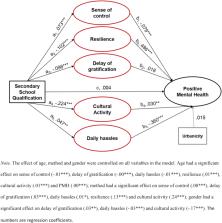 Prevalence rates for mental health problems are higher when an individual's socioeconomic status (SES) is low, but the underlying mechanisms are not clearly understood. We investigated associations between education as indicator for SES and depressive symptoms as well as positive mental health (PMH). Moreover, we hypothesized that low education is associated with a lack of psychosocial resources and more daily hassles, which in turn mediate the relationships between education and mental health. In a German representative sample ( N = 7937), we cross-sectionally first examined whether a person's educational level was associated with depressive symptoms and PMH. Educational level was defined as the highest academic qualification achieved. Second, we investigated whether also sense of control, resilience, delay of gratification, cultural activity and daily hassles followed gradients along the educational level. Third, we investigated whether they mediated the relationship between education and mental health. Results showed that depressive symptoms measured by items from the DASS-42 depression subscale were more prevalent for persons with a low educational level, PMH operationalized by the Positive Mental Health Scale was equally distributed, and all psychosocial characteristics followed the gradient of educational level. In addition, the group with a high school diploma was particularly burdened. Structural equation modeling indicated that the associations between education and mental health were mediated by all psychosocial characteristics and daily hassles, apart from the delay of gratification. In the group with the lowest educational level the model fit indices for depressive symptoms and PMH were acceptable ( χ2 = 10007.243 (627), CFI = 0.869, RMSEA = 0.04 (90% CI [0.04, 0.04], SRMR = 0.05; and χ2 = 12779.968 (741), CFI = 0.86, RMSEA = 0.05 (90% CI [0.05, 0.05], SRMR = 0.05), respectively). The effect size P m refers to the proportion of the total effect that is mediated by one or more variables (“M”), and the effect size of all indirect effects in the model for depressive symptoms was P m = .80 and for PMH it was P m = .68. The results support our hypotheses that low education is associated with less psychosocial resources, which in turn serve together with daily hassles as pathways between education and depressive symptoms as well as PMH. Building on these findings, longitudinal studies are necessary to investigate causality.

Prevalence of mental disorders in Europe: results from the European Study of the Epidemiology of Mental Disorders (ESEMeD) project.

V. Kovess,  F Mazzi,  S-I Joo … (2003)
To describe the 12-month and lifetime prevalence rates of mood, anxiety and alcohol disorders in six European countries. A representative random sample of non-institutionalized inhabitants from Belgium, France, Germany, Italy, the Netherlands and Spain aged 18 or older (n = 21425) were interviewed between January 2001 and August 2003. DSM-IV disorders were assessed by lay interviewers using a revised version of the Composite International Diagnostic Interview (WMH-CIDI). Fourteen per cent reported a lifetime history of any mood disorder, 13.6% any anxiety disorder and 5.2% a lifetime history of any alcohol disorder. More than 6% reported any anxiety disorder, 4.2% any mood disorder, and 1.0% any alcohol disorder in the last year. Major depression and specific phobia were the most common single mental disorders. Women were twice as likely to suffer 12-month mood and anxiety disorders as men, while men were more likely to suffer alcohol abuse disorders. ESEMeD is the first study to highlight the magnitude of mental disorders in the six European countries studied. Mental disorders were frequent, more common in female, unemployed, disabled persons, or persons who were never married or previously married. Younger persons were also more likely to have mental disorders, indicating an early age of onset for mood, anxiety and alcohol disorders.

A snapshot of the age distribution of psychological well-being in the United States.

A A Stone,  J E Schwartz,  J. Broderick … (2010)
Psychological well-being (WB) includes a person's overall appraisal of his or her life (Global WB) and affective state (Hedonic WB), and it is considered a key aspect of the health of individuals and groups. Several cross-sectional studies have documented a relation between Global WB and age. Little is known, however, about the age distribution of Hedonic WB. It may yield a different view of aging because it is less influenced by the cognitive reconstruction inherent in Global WB measures and because it includes both positive and negative components of WB. In this study we report on both Global and Hedonic WB assessed in a 2008 telephone survey of 340,847 people in the United States. Consistent with prior studies, Global WB and positive Hedonic WB generally had U-shaped age profiles showing increased WB after the age of 50 years. However, negative Hedonic WB variables showed distinctly different and stronger patterns: Stress and Anger steeply declined from the early 20s, Worry was elevated through middle age and then declined, and Sadness was essentially flat. Unlike a prior study, men and women had very similar age profiles of WB. Several measures that could plausibly covary with the age-WB association (e.g., having children at home) did not alter the age-WB patterns. Global and Hedonic WB measures appear to index different aspects of WB over the lifespan, and the postmidlife increase in WB, especially in Hedonic WB, deserves continued exploration.