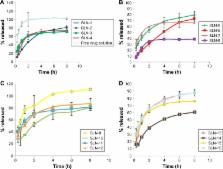 To achieve these aims, the nasal route was adopted to exploit first its avoidance of the hepatic first-pass metabolism to increase the absolute bioavailability, and second the direct nose-to-brain pathway to enhance the brain drug delivery. Solid lipid nanoparticles were selected as a drug delivery system to enhance agomelatine permeability across the blood–brain barrier and therefore its brain delivery.

The intranasal administration of agomelatine solid lipid nanoparticles has effectively enhanced both the absolute bioavailability and the brain delivery of agomelatine.

A New Function for the LDL Receptor: Transcytosis of LDL across the Blood–Brain Barrier

Benedicte Dehouck,  Laurence Fenart,  Marie-Pierre Dehouck … (1997)
Lipoprotein transport across the blood–brain barrier (BBB) is of critical importance for the delivery of essential lipids to the brain cells. The occurrence of a low density lipoprotein (LDL) receptor on the BBB has recently been demonstrated. To examine further the function of this receptor, we have shown using an in vitro model of the BBB, that in contrast to acetylated LDL, which does not cross the BBB, LDL is specifically transcytosed across the monolayer. The C7 monoclonal antibody, known to interact with the LDL receptor-binding domain, totally blocked the transcytosis of LDL, suggesting that the transcytosis is mediated by the receptor. Furthermore, we have shown that cholesterol-depleted astrocytes upregulate the expression of the LDL receptor at the BBB. Under these conditions, we observed that the LDL transcytosis parallels the increase in the LDL receptor, indicating once more that the LDL is transcytosed by a receptor-mediated mechanism. The nondegradation of the LDL during the transcytosis indicates that the transcytotic pathway in brain capillary endothelial cells is different from the LDL receptor classical pathway. The switch between a recycling receptor to a transcytotic receptor cannot be explained by a modification of the internalization signals of the cytoplasmic domain of the receptor, since we have shown that LDL receptor messengers in growing brain capillary ECs (recycling LDL receptor) or differentiated cells (transcytotic receptor) are 100% identical, but we cannot exclude posttranslational modifications of the cytoplasmic domain, as demonstrated for the polymeric immunoglobulin receptor. Preliminary studies suggest that caveolae are likely to be involved in the potential transport of LDL from the blood to the brain.

M Alam,  Sarwar Beg,  Abdus Samad … (2010)
Blood-brain barrier (BBB) together with enzymes restricts the entry of substances for maintaining the internal milieu of the brain. Because of the presence of multiple endogenous transporters, BBB allows a selective entry of nutrients and minerals across it and limits the entry of foreign substances like drugs as well as neuropharmaceutical agents. This makes the CNS treatment ineffective. The conventional drug delivery systems which release drug into general circulation fail to deliver drugs effectively to brain and is therefore not very useful in treating certain diseases that affect CNS including Alzheimer's disease, dementia, Parkinson's disease, mood disorder, AIDS, viral and bacterial meningitis. Therefore there is a need to develop and design approaches which specifically target to brain in a better and effective way. The present review enlightens about several novel approaches including nanotechnology based approach like nanoparticles, liposomes, antibody mediated delivery approach and application of genomics in brain drug targeting that would give an insight to the researchers, academia and industrialists.

Solid lipid nanoparticles as vehicles of drugs to the brain: current state of the art.

Franco Dosio,  Ilaria Solazzi,  E Muntoni … (2014)
Central nervous system disorders are already prevalent and steadily increasing among populations worldwide. However, most of the pharmaceuticals present on world markets are ineffective in treating cerebral diseases, because they cannot effectively cross the blood brain barrier (BBB). Solid lipid nanoparticles (SLN) are nanospheres made from biocompatible solid lipids, with unique advantages among drug carriers: they can be used as vehicles to cross the BBB. This review examines the main aspects surrounding brain delivery with SLN, and illustrates the principal mechanisms used to enhance brain uptake of the delivered drug. Copyright © 2014 Elsevier B.V. All rights reserved.