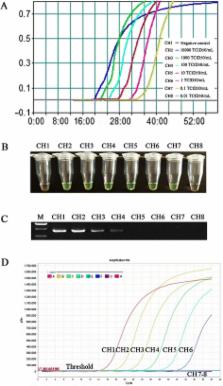 Porcine epidemic diarrhea (PED) is an acute and highly contagious enteric disease characterized by severe enteritis, vomiting and watery diarrhea in swine. Recently, the outbreak of the epidemic disease has been a serious problem in swine industry. The objective of this study is to develop a rapid, sensitive, and real-time reverse transcription loop-mediated isothermal amplification (RT-LAMP) method for the detection of porcine epidemic diarrhea virus (PEDV) in less equipped laboratories.

The optimal reaction condition of the current real-time RT-LAMP for PEDV was 62 °C for 45 min. It was capable of detecting PEDV from clinical samples and differentiating PEDV from several related porcine viruses, while it did not require additional expensive equipment. The minimum detection limit of the real-time RT-LAMP assay was 0.07PFU per reaction for PEDV RNA, making this assay approximately 100-fold more sensitive than that of one-step RT-PCR. By screening a panel of clinical specimens, the results showed that this method presented a similar sensitivity with real-time RT-PCR and was somewhat sensitive than one-step RT-PCR in detection of clinical samples.

In this study, we have developed a new real-time RT-LAMP method, which is rapid, sensitive and efficient to detect PEDV.This method holds great promises not only in laboratory detection and discrimination of PEDV but also in large scale field and clinical studies.

T. Notomi (2000)
We have developed a novel method, termed loop-mediated isothermal amplification (LAMP), that amplifies DNA with high specificity, efficiency and rapidity under isothermal conditions. This method employs a DNA polymerase and a set of four specially designed primers that recognize a total of six distinct sequences on the target DNA. An inner primer containing sequences of the sense and antisense strands of the target DNA initiates LAMP. The following strand displacement DNA synthesis primed by an outer primer releases a single-stranded DNA. This serves as template for DNA synthesis primed by the second inner and outer primers that hybridize to the other end of the target, which produces a stem-loop DNA structure. In subsequent LAMP cycling one inner primer hybridizes to the loop on the product and initiates displacement DNA synthesis, yielding the original stem-loop DNA and a new stem-loop DNA with a stem twice as long. The cycling reaction continues with accumulation of 10(9) copies of target in less than an hour. The final products are stem-loop DNAs with several inverted repeats of the target and cauliflower-like structures with multiple loops formed by annealing between alternately inverted repeats of the target in the same strand. Because LAMP recognizes the target by six distinct sequences initially and by four distinct sequences afterwards, it is expected to amplify the target sequence with high selectivity.

Daesub Song,  Bongkyun Park (2012)
The porcine epidemic diarrhoea virus (PEDV), a member of the Coronaviridae family, causes acute diarrhoea and dehydration in pigs. Although it was first identified in Europe, it has become increasingly problematic in many Asian countries, including Korea, China, Japan, the Philippines, and Thailand. The economic impacts of the PEDV are substantial, given that it results in significant morbidity and mortality in neonatal piglets and is associated with increased costs related to vaccination and disinfection. Recently, progress has been made in understanding the molecular epidemiology of PEDV, thereby leading to the development of new vaccines. In the current review, we first describe the molecular and genetic characteristics of the PEDV. Then we discuss its molecular epidemiology and diagnosis, what vaccines are available, and how PEDV can be treated.