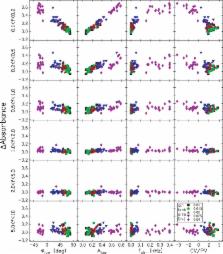 Accurate ear-canal acoustic measurements, such as wideband acoustic admittance, absorbance, and otoacoustic emissions, require that the measurement probe be tightly sealed in the ear canal. Air leaks can compromise the validity of the measurements, interfere with calibrations, and increase variability. There are no established procedures for determining the presence of air leaks or criteria for what size leak would affect the accuracy of ear-canal acoustic measurements. The purpose of this study was to determine ways to quantify the effects of air leaks and to develop objective criteria to detect their presence.

Air leaks were simulated by modifying the foam tips that are used with the measurement probe through insertion of thin plastic tubing. To analyze the effect of air leaks, acoustic measurements were taken with both modified and unmodified foam tips in brass-tube cavities and human ear canals. Measurements were initially made in cavities to determine the range of critical leaks. Subsequently, data were collected in ears of 21 adults with normal hearing and normal middle-ear function. Four acoustic metrics were used for predicting the presence of air leaks and for quantifying these leaks: (1) low-frequency admittance phase (averaged over 0.1–0.2 kHz), (2) low-frequency absorbance, (3) the ratio of compliance volume to physical volume (CV/PV), and (4) the air-leak resonance frequency. The outcome variable in this analysis was the absorbance change ( Δabsorbance), which was calculated in eight frequency bands.

The trends were similar for both the brass cavities and the ear canals. ΔAbsorbance generally increased with air-leak size and was largest for the lower frequency bands (0.1–0.2 and 0.2–0.5 kHz). Air-leak effects were observed in frequencies up to 10 kHz, but their effects above 1 kHz were unpredictable. These high-frequency air leaks were larger in brass cavities than in ear canals. Each of the four predictor variables exhibited consistent dependence on air-leak size. Low-frequency admittance phase and CV/PV decreased, while low-frequency absorbance and the air-leak resonance frequency increased.

The purpose of this study was to determine how to quantify the effects of air leaks during ear-canal probe microphone measurements and to develop objective criteria to detect their presence. To analyze the effect of air leaks, acoustic measurements were taken in brass-tube cavities and in human ear canals with foam tips without leaks and with foam tips modified to produce air leaks of different sizes. Results suggest that the effect of air leaks can be significant when their equivalent diameter exceeds 0.01 inches.

Ear-canal impedance and reflection coefficient in human infants and adults.

Kathryn H Arehart,  J Bulen,  Joseph D. Keefe … (1993)
The ear-canal impedance and reflection coefficient were measured in an adult group and in groups of infants of age 1, 3, 6, 12, and 24 months over frequency range 125-10,700 Hz. The development of the external ear canal and middle ear strongly affect input impedance and reflection coefficient responses, and this development is not yet complete at age 24 months. Contributing factors include growth of the area and length of the ear canal, a resonance in the ear-canal walls of younger infants, and a probable influence of growth of the middle-ear cavities. The middle-ear compliance is lower in infants than adults, and the middle-ear resistance is higher. The power transfer into the middle ear of the infant is much less than into that of the adult. Such differences in power transfer directly influence both behavioral and physiological measurements of hearing. The difficulties of interpretation of neonatal tympanograms are shown to be a consequence of ear-canal wall vibration. Impedance and reflectance measurements in the 2-4-kHz range are recommended as a potentially useful clinical tool for circumventing these difficulties.

John J Rosowski,  Hideko Nakajima,  Mohamad A Hamade … (2015)
This study compares measurements of ear-canal reflectance (ECR) to other objective measurements of middle ear function including audiometry, umbo velocity (VU), and tympanometry in a population of strictly defined normal-hearing ears. Data were prospectively gathered from 58 ears of 29 normal-hearing subjects, 16 females and 13 males, aged 22 to 64 yr. Subjects met all of the following criteria to be considered as having normal hearing: (1) no history of significant middle ear disease; (2) no history of otologic surgery; (3) normal tympanic membrane on otoscopy; (4) pure-tone audiometric thresholds of 20 dB HL or better for 0.25 to 8 kHz; (5) air-bone gaps no greater than 15 dB at 0.25 kHz and 10 dB for 0.5 to 4 kHz; (6) normal, type-A peaked tympanograms; and (7) all subjects had two "normal" ears (as defined by these criteria). Measurements included pure-tone audiometry for 0.25 to 8 kHz, standard 226 Hz tympanometry, ECR for 0.2 to 6 kHz at 60 dB SPL using the Mimosa Acoustics HearID system, and umbo velocity (VU) for 0.3 to 6 kHz at 70 to 90 dB SPL using the HLV-1000 laser Doppler vibrometer (Polytec Inc). Mean power reflectance (|ECR|) was near 1.0 at 0.2 to 0.3 kHz, decreased to a broad minimum of 0.3 to 0.4 between 1 and 4 kHz, and then sharply increased to almost 0.8 by 6 kHz. The mean pressure reflectance phase angle (∠ECR) plotted on a linear frequency scale showed a group delay of approximately 0.1 msec for 0.2 to 6 kHz. Small significant differences were observed in |ECR| at the lowest frequencies between right and left ears and between males and females at 4 kHz. |ECR| decreased with age but reached significance only at 1 kHz. Our ECR measurements were generally similar to previous published reports. Highly significant negative correlations were found between |ECR| and VU for frequencies below 1 kHz. Significant correlations were also found between the tympanometrically determined peak total compliance and |ECR| and VU at frequencies below 1 kHz. The results suggest that middle ear compliance contributes significantly to the measured power reflectance and umbo velocity at frequencies below 1 kHz but not at higher frequencies. This study has established a database of objective measurements of middle ear function (ECR, umbo velocity, tympanometry) in a population of strictly defined normal-hearing ears. These data will promote our understanding of normal middle ear function and will serve as a control for comparison to similar measurements made in pathological ears.

Stephen Neely,  Judy Kopun,  Rachel A Scheperle … (2008)
Standing waves can cause errors during in-the-ear calibration of sound pressure level (SPL), affecting both stimulus magnitude and distortion-product otoacoustic emission (DPOAE) level. Sound intensity level (SIL) and forward pressure level (FPL) are two measurements theoretically unaffected by standing waves. SPL, SIL, and FPL in situ calibrations were compared by determining sensitivity of DPOAE level to probe-insertion depth (deep and "shallow") for a range of stimulus frequencies (1-8 kHz) and levels (20-60 dB). Probe-insertion depth was manipulated with the intent to shift the frequencies with standing-wave minima at the emission probe, introducing variability during SPL calibration. The absolute difference in DPOAE level between insertions was evaluated after correcting for an incidental change caused by the effect of ear-canal impedance on the emission traveling from the cochlea. A three-way analysis of variance found significant main effects for stimulus level, stimulus frequency, and calibration method, as well as significant interactions involving calibration method. All calibration methods exhibited changes in DPOAE level due to the insertion depth, especially above 4 kHz. However, SPL demonstrated the greatest changes across all stimulus levels for frequencies above 2 kHz, suggesting that SIL and FPL provide more consistent measurements of DPOAEs for frequencies susceptible to standing-wave calibration errors.

This is an open-access article distributed under the terms of the Creative Commons Attribution-NonCommercial-NoDerivatives 3.0 License, where it is permissible to download and share the work provided it is properly cited. The work cannot be changed in any way or used commercially.