Two Cases of Allergy to Insulin in Gestational Diabetes 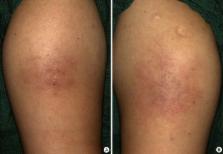 Allergic reaction to insulin is uncommon since the introduction of human recombinant insulin preparations and is more rare in pregnant than non-pregnant females due to altered immune reaction during pregnancy. Herein, we report two cases of allergic reaction to insulin in gestational diabetes that were successfully managed. One case was a 33-year-old female using isophane-neutral protamine Hagedorn human insulin and insulin lispro. She experienced dyspnea, cough, urticaria and itching sensation at the sites of insulin injection immediately after insulin administration. We discontinued insulin therapy and started oral hypoglycemic agents with metformin and glibenclamide. The other case was a 32-year-old female using insulin lispro and insulin detemer. She experienced pruritus and burning sensation and multiple nodules at the sites of insulin injection. We changed the insulin from insulin lispro to insulin aspart. Assessments including immunoglobulin E (IgE), IgG, eosinophil, insulin antibody level and skin biopsy were performed. In the two cases, the symptoms were resolved after changing the insulin to oral agents or other insulin preparations. We report two cases of allergic reaction to human insulin in gestational diabetes due to its rarity.

The influence of pregnancy on systemic immunity

Michael Pazos,  Rhoda Sperling,  Thomas M. Moran … (2012)
Adaptations in maternal systemic immunity are presumed to be responsible for observed alterations in disease susceptibility and severity as pregnancy progresses. Epidemiological evidence as well as animal studies have shown that influenza infections are more severe during the second and third trimesters of pregnancy, resulting in greater morbidity and mortality, although the reason for this is still unclear. Our laboratory has taken advantage of 20 years of experience studying the murine immune response to respiratory viruses to address questions of altered immunity during pregnancy. With clinical studies and unique animal model systems, we are working to define the mechanisms responsible for altered immune responses to influenza infection during pregnancy and what roles hormones such as estrogen or progesterone play in these alterations.

Comparison of insulin aspart and lispro: pharmacokinetic and metabolic effects.

C. Homko,  A. Deluzio,  C JIMÉNEZ … (2003)
To compare insulin levels and actions in patients with type 1 diabetes after subcutaneous injection of the rapid-acting insulin analogs aspart and lispro. Seven C-peptide-negative patients with type 1 diabetes (two men and five women) were studied at the General Clinical Research Center at Temple University Hospital two times, 1 month apart. Their plasma glucose was normalized overnight by intravenous infusion of insulin. The next morning, they received subcutaneous injections of either aspart or lispro (9.4 +/- 1.9 U) in random order. For the next 4-5 h, their plasma glucose was clamped at approximately 5.5 mmol/l with a variable infusion of 20% glucose. The study was terminated after 8 h. Both insulin analogs produced similar serum insulin levels (250-300 pmol/l) at approximately 30 min and disappeared from serum after approximately 4 h. Insulin aspart and lispro had similar effects on glucose and fat metabolism. Effects on carbohydrate metabolism (glucose uptake, glucose oxidation, and endogenous glucose production) peaked after approximately 2-3 h and disappeared after approximately 5-6 h. Effects on lipid metabolism (plasma free fatty acid, ketone body levels, and free fatty acid oxidation) appeared to peak earlier (at approximately 2 h) and disappeared earlier (after approximately 4 h) than the effects on carbohydrate metabolism. We conclude that both insulin aspart and lispro are indistinguishable from each other with respect to blood levels and that they are equally effective in correcting abnormalities in carbohydrate and fat metabolism in patients with type 1 diabetes.

The use of oral hypoglycaemic agents in pregnancy.

R Holt,  K D Lambert (2014)
While insulin has been the treatment of choice when lifestyle measures do not maintain glycaemic control during pregnancy, recent studies have suggested that certain oral hypoglycaemic agents may be safe and acceptable alternatives. With the exception of metformin and glibenclamide (glyburide), there are insufficient data to recommend treatment with any other oral hypoglycaemic agent during pregnancy. There are no serious safety concerns with metformin, despite it crossing the placenta. When used in the first trimester, there is no increase in congenital abnormalities and there appears to be a reduction in miscarriage, pre-eclampsia and subsequent gestational diabetes. Studies of the use of metformin in gestational diabetes show at least equivalent neonatal outcomes, while reporting reductions in neonatal hypoglycaemia, maternal hypoglycaemia and weight gain and improved treatment satisfaction. Glibenclamide effectively lowers blood glucose in women with gestational diabetes, possibly with a lower treatment failure rate than metformin. Although generally well tolerated, some studies have reported higher rates of pre-eclampsia, neonatal jaundice, longer stay in the neonatal care unit, macrosomia and neonatal hypoglycaemia. There is a paucity of long-term follow-up data on children exposed to oral agents in utero. The American College of Obstetrics and Gynecology and the UK National Institute of Health and Care Excellence (NICE) have recommended that either metformin or glibenclamide can be used to treat gestational diabetes. Metformin is also recommended for use in the pre-conception period by NICE. By contrast, the American Diabetes Association recommends that both drugs should only be used during pregnancy in the context of clinical trials.